Shovel Knight is almost an entire decade old, but Yacht Club Games keeps figuring out new ways to play the game. How well does its latest attempt do at capturing the classic Shovel Knight feeling?

Right from the beginning you can be rest assured that Shovel Knight Dig still feels just as good to control and play as the original release did. The platforming is snappy, and the level design goes quite far in making good use of the titular knight’s limited arsenal. The big thing to keep in mind, however, is that, for a change, Shovel Knight is going to be focusing on digging downwards. 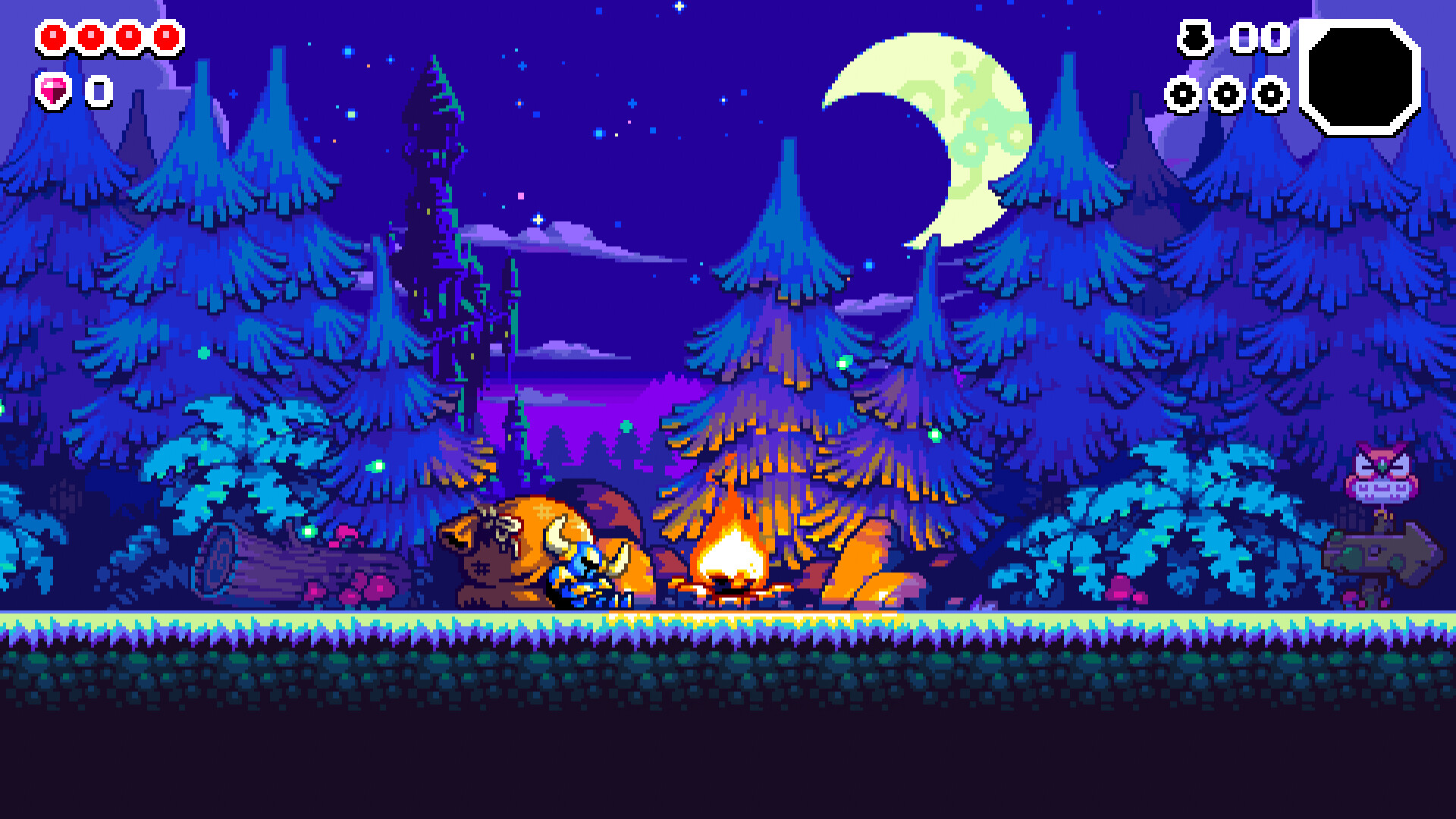 "The platforming is snappy, and the level design goes quite far in making good use of the titular knight’s limited arsenal. The big thing to keep in mind, however, is that, for a change, Shovel Knight is going to be focusing on digging downwards."

In having its levels progress downwards rather than sideways, Shovel Knight has introduced a major shift to how the classic gameplay works. Rather than the original’s emphasis on figuring out the best way through a level while avoiding or taking out enemies and traps, Shovel Knight Dig, instead, focuses on keeping your downward momentum going. Rather than juggling having to deal with small monsters as you try and complete some challenging platforming puzzles, you’re going to be focused almost entirely on digging down.

This doesn’t mean that you don’t travel sideways at all; several of the randomly-generated levels have you visiting side rooms for some extra challenges, a merchant, or even just free loot. Some levels even have you move over a screen to your left or right in order to progress further downwards. But ultimately, the game is squarely focused on going down.

If you look at the release platforms for Shovel Knight Dig, it might start becoming more and more obvious just what kind of game it is. Considering the fact that it’s also being released on iOS devices through Apple Arcade, Shovel Knight Dig would obviously have to be designed around shorter play sessions; can’t really be in the middle of an intense boss fight while you’re waiting for your bus, after all.

This means Shovel Knight Dig’s challenge level isn’t as high as compared to the original. This, of course, also comes with the territory when you have randomly-generated levels rather than handcrafted ones with meticulous enemy placement. That’s not to say that it’s an easy game, however. You’ll be dying quite a bit as you try and make your way further downwards. It’s still a fair bit easier than its predecessors though.

The general gameplay loop of Shovel Knight Dig has been designed to encourage just one more run. Starting up a new run is as simple as jumping down a hole, after all, and the game doesn’t really bog you down with complicated progression systems. Even if you die, a fresh run is just a button press away. 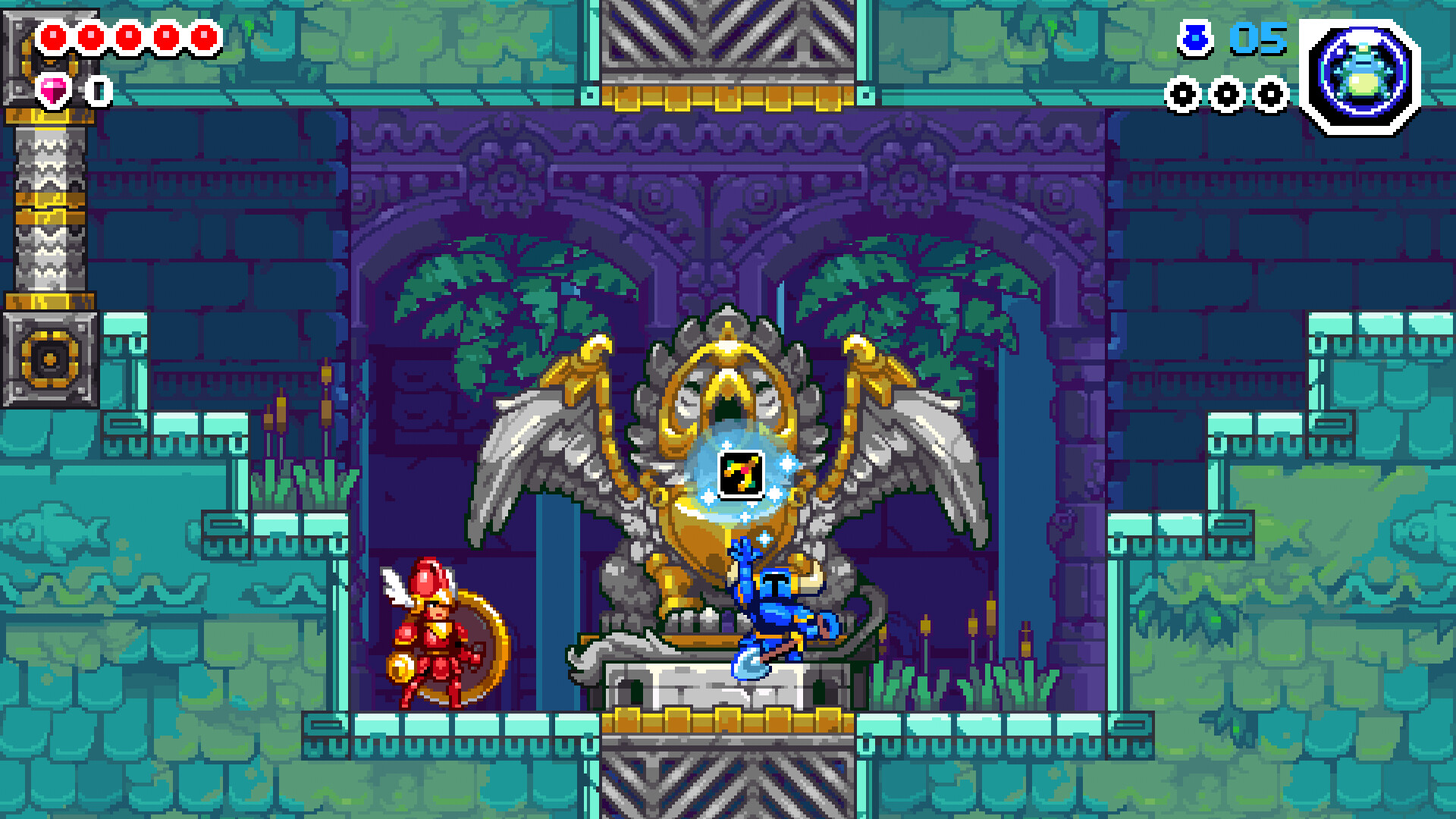 "Shovel Knight Dig’s challenge level isn’t as high as compared to the original. This, of course, also comes with the territory when you have randomly-generated levels rather than handcrafted ones with meticulous enemy placement."

This roguelite gameplay loop works surprisingly well in Shovel Knight Dig. Nothing that could possibly discourage you from trying out another run is present in the game. Even upgrades are priced in such a way that you’re only going to be visiting the stores sometimes. You won’t really have enough currency to keep visiting the stores in between every run—unless you’re an absurdly good player, of course.

As for the story, Shovel Knight Dig is a far cry from the surprisingly involved plot of the original Shovel Knight. Rather than going on a grand quest to save a friend and a kingdom, you’re instead just trying to get your backpack back. While our titular knight was taking a nap in the woods, someone decided to dig a giant hole right next to his sleeping spot, taking Shovel Knight’s backpack as they went down. It’s now up to you to stop whatever nefarious plot is happening, and hopefully get your backpack back in the process.

This story isn’t really going to win any awards, but like I mentioned earlier in the review, there isn’t really anything present in the game that’s going to eat up too much of your time. Shovel Knight Dig really doesn’t want you to waste your time with a story. It really just wants you to engage with its gameplay.

This design philosophy works out incredibly well, largely because the core gameplay is fantastic. The controls are simple, movement feels snappy, and mistakes feel like your own. It never really feels like the game is acting against you. Instead, every hit you take and every death you die ends up feeling like they’re all just mistakes that you made. This encourages the player to try and get better at the game.

Visually, Shovel Knight Dig is gorgeous. While still using a pixel art style, just about every aspect has been touched up to a considerable degree. In fact, if you compare its looks to that of the original Shovel Knight, the difference becomes abundantly clear. Shovel Knight Dig is also a brighter and more colorful game than its predecessor.

Where the original Shovel Knight was focused on evoking a very specific look—that of a game running on a older hardware—Shovel Knight Dig manages to hang on to the same general aesthetics while still offering up more detail and more color. There are some spots where the higher fidelity might make things like secret destructible walls less obvious, but once you’ve played a few runs of Shovel Knight Dig, these concerns largely fall by the wayside. 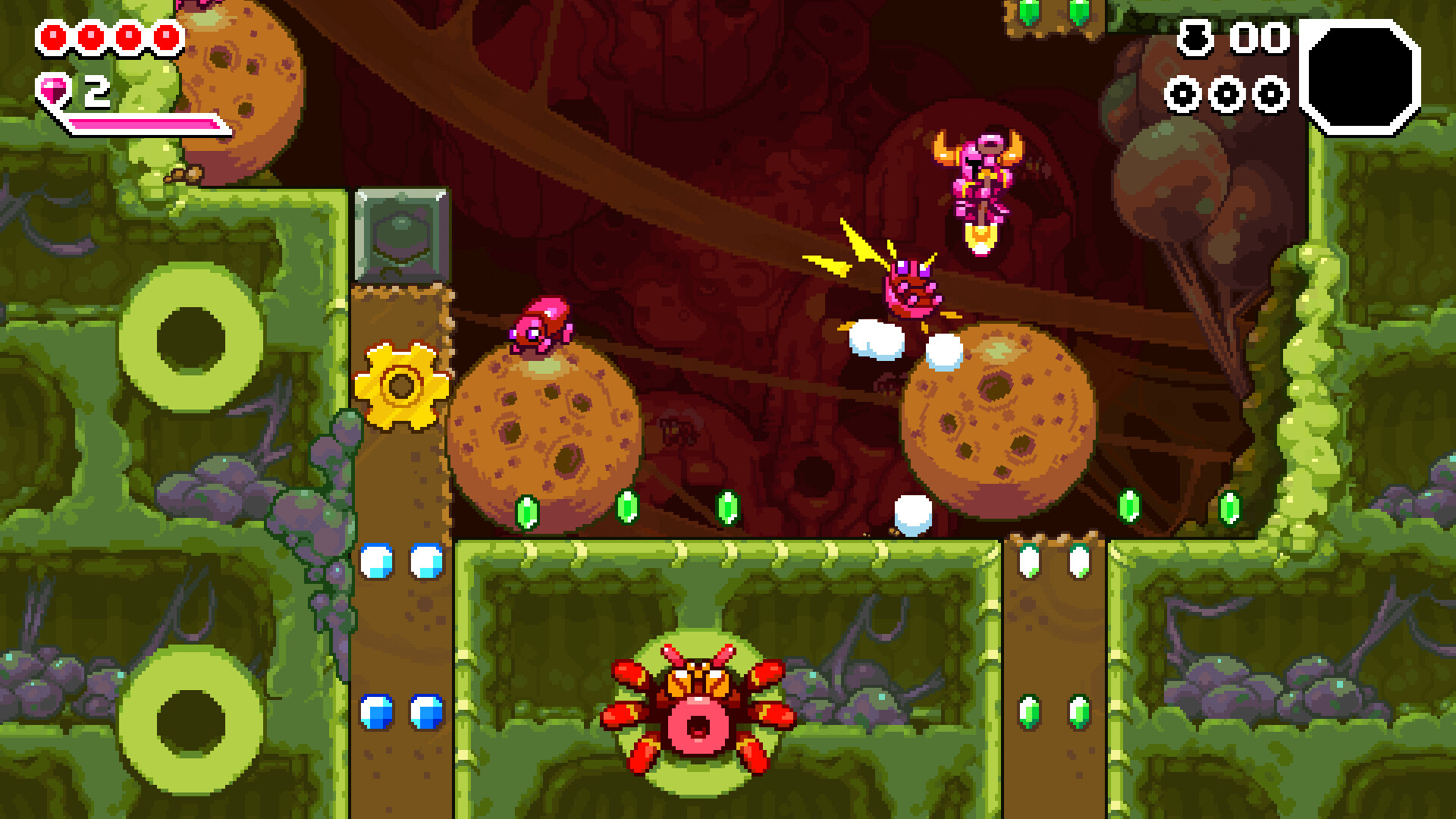 "Visually, Shovel Knight Dig is gorgeous. While still using a pixel art style, just about every aspect has been touched up to a considerable degree."

The audio is no slouch either. Sound effects feel right at home with the art style, and the music, while sometimes repetitive, still feels quite at home. It’s able to capture the intensity of the general gameplay quite well, and the sound effect for when you land a killing blow on an enemy is still one of my favorites in just about any game. Even the boss fight music captures the hectic fight of classic Shovel Knight-styled bosses perfectly. Really, the only complaint I have here comes from the repetitiveness of the music in the regular non-boss levels.

Shovel Knight Dig is far from the biggest departure from the Shovel Knight formular. It doesn’t really change genres like, say, Shovel Knights Pocket Dungeon did. Rather, it takes the existing framework of Shovel Knight’s general gameplay, and throws in an interesting twist. The fact that rather than navigating through levels in the style of classic Mega Man games, you’re constantly digging downwards brings a radical change to how you look at Shovel Knight’s toolkit. Moves you’ve been familiar with for the purposes of platforming now all of a sudden have completely different uses. Bouncing off the top of enemies isn’t as useful for continuing further in the level as it was in the original game.

Ultimately, however, Shovel Knight Dig manages to pull off just about everything it was going for. The new roguelite gameplay loop works quite well with the protagonist’s limited-but-adaptable move set, and the game does as much as it can to engender the “one more run” mindset. It doesn’t bog you down with an overly-complex story or complicated progression systems. All it really wants you to do is dig downwards, and have fun doing it.

Final Verdict:
AMAZING
Shovel Knight Dig, while far from being the furthest departure from the franchise’s classic gameplay, still manages to be a unique experience thanks to the unique twist of having to use a platforming move set to make progress by traversing vertical space. The Shovel Knight gameplay is still as crisp as ever, and Shovel Knight Dig’s story and progression systems do a great job of staying out of the way, and ultimately encouraging you to try one more run.
A copy of this game was provided by Developer/Publisher/Distributor/PR Agency for review purposes. Click here to know more about our Reviews Policy.