Shrek Forever After is an action-adventure title developed by XPEC (for PC, PlayStation 3, Xbox 360 & Wii) and Griptonite Games (NDS), and was published by Activision.  The iPhone port was handled by veteran mobile gaming developer Gameloft.  The game is based on the film of the same name – the titular fourth instalment in the Shrek franchise – and as with previous titles is soaked in fairytale lore; but the sly references and double-entendre which made the films enjoyable for older viewers is missing from the game.

As in the movie, Shrek has signed a contract with the crafty Rumpelstiltskin which had unforeseen consequences (the best kind). The game centres on his efforts to void the contract via a handy exit clause and by doing so set the world to rights. However in this alternate world nothing is as it seems and fulfilling the terms of the exit clause is harder than it sounds. 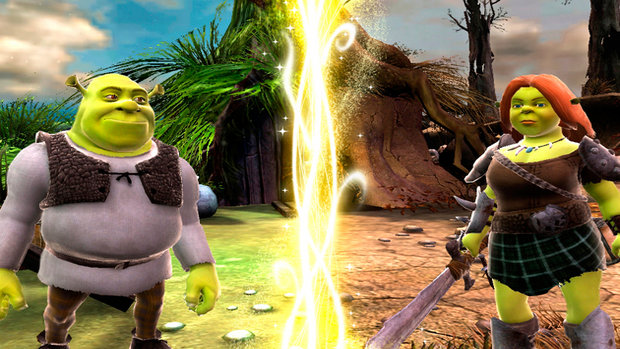 Find the Magic Mirror in each level to switch between worlds.

The game is played as four characters: Shrek, Alternate Fiona, Alternate Puss-in-boots and Donkey. The player controls one avatar to represent the party (think Final Fantasy) and can switch between characters at will. Each has their own signature move which will help the player overcome obstacles: Shrek can move and carry large objects, Fiona can set things on fire with her lantern, Puss can climb and Donkey can kick open locked gates. Each skill can also be upgraded to a ‘Super’ version which allows the characters to access previously locked areas to collect treasure and secret items for bonus coins. The characters also have their own special attacks: Shrek yells, Puss Purrs, Donkey Sings and Fiona blows her nose (yes, really) – all of which stun enemies in the immediate area so you can combo them until they fall over and disappear.

However, the upgrades are introduced at arbitrary points in the game, just in time for them to be used to overcome new barriers that would stop you completing a level, and are acquired simply by talking to an NPC. Furthermore the large amount of easily-available treasure will not prompt most gamers to go back and replay completed levels just to increase their hoard. This approach left me feeling cheated by the lack of challenge, but should suit the games target demographic – that is to say young fans of the Shrek franchise. Coins can be exchanged for upgraded power-ups back at the hub, which will help you during combat; or used to buy help with the larger puzzles in each level from the Three Blind Mice. 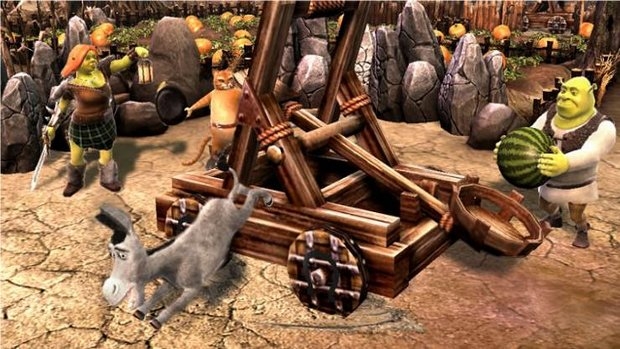 Catapults are often a component of puzzles in each level.

Each level consists of a mixture of puzzles and combat stages.  An interesting game mechanic is the ability to switch between the Alternate world and the normal Shrek continuity. This is accomplished by toggling the Magic Mirror in set locations in each level. Can’t cross a gap? Switch to the other world and cross the bridge which appears, or take the new path which has now appeared. This use of dimension-swapping is inspired for a tie-in game and reminded me of a similar mechanic in Zelda Four Swords.

Combat stages take place in an arena in the level, where progressive waves of enemies are thrown at you to die screaming under your blade… I may be wishing for a Gritty reboot here, but the waves of enemies remain. They are easily defeated by mashing the attack button and by use of the powerups they drop. Interestingly for a tie-in game, there is a combo-meter included in the interface which bestows more power-up drops the fuller it becomes. Interestingly, there is a puzzle in each level which requires two players to complete. This is a nice feature which is often completely missing from tie-in games. 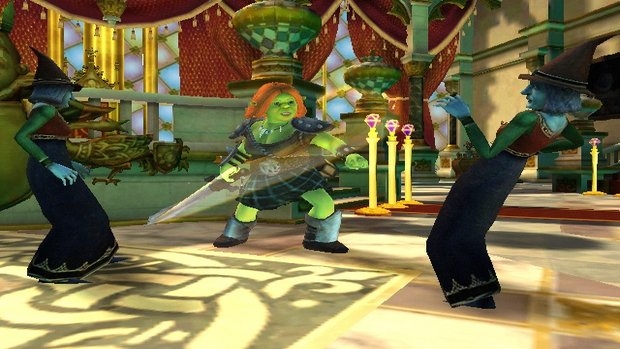 Fiona is a good character for combat, as her attacks are fastest.

The controls are very simple, which again suits the target demographic. Left stick controls movement and rotation, X uses power-ups, A is a standard attack, B is the character’s special attack, and Y switches to the character with the most health. The D-pad controls switching to specific characters, with each assigned to a direction and available to play as from the beginning. Chaining standard attacks together is the only way to fight in this game, but there are no combos to unlock. Spamming A with the occasional use of B and X (when available) will win every fight with little effort.

Graphically, the game is very mediocre by Xbox standards. As with most tie-in games, the graphic quality is usually determined by the performance of the poorest console it is ported to: in this case, the Wii. Jagged lines abound in every level and the use of ‘painted’ backgrounds to simulate depth will be immediately noticeable to experienced gamers. That said, even though the graphics will not cause any problems for PS3 or Xbox owners, they are pleasing to the eye and retain the charm & colour palette from the films. There are pre-rendered cut-scenes to advance the game’s plot (although as I haven’t seen the film I can’t say if they have been directly lifted or created solely for the game). 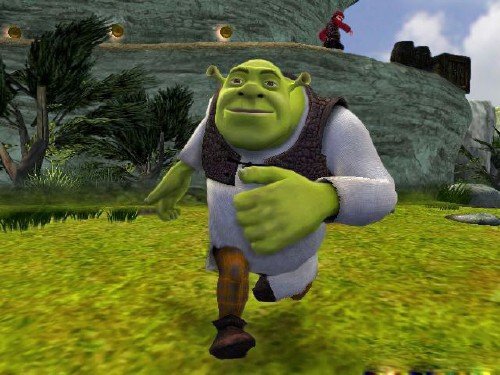 A face only a mother could love… and probably not even then.

Shrek Forever After has a satisfactory soundtrack with nice ambient music and some surprisingly well-known songs in the combat stages. My personal favourite is the 30 second loop which starts “Do you like Pancakes? (Yeah we like pancakes) Do you like French toast? (Yeah we like French toast)” and continues in a similar vein. What I found annoying was the voice-acting for the playable characters. Rather than use the cast of the film, which is usually one of the few positives found in tie-in games, Activision have decided to save on the budget and have the characters impersonated (poorly) instead. This is very noticeable when Shrek occasionally drops his accent mid-sentence.

I mentioned earlier that much of the intentional grown-up humour is missing, but the voiceover for the NPC Cooky (the vendor in the hub) is the most blatant I have ever encountered. 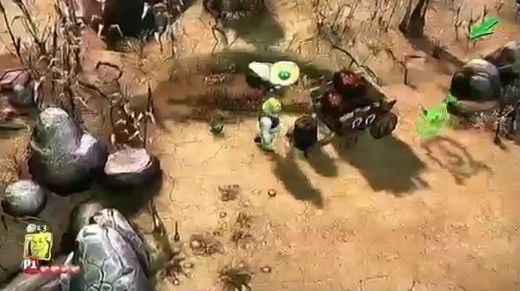 The fact that the player can get puzzle help, as well as the low difficulty curve, and simple levels indicate that this is a game aimed at a younger audience. It will probably not be remotely challenging (verging on boring) for anyone over the age of 13. That said, Shrek Forever After is not a bad little game. Definitely one for your kid brother or sister, or buy it if your children are Shrek fans.

Final Verdict:
FAIR
Not a bad little game, especially for a movie tie-in. Effort has gone into production, but this is one game that has clearly been aimed at a younger audience.
A copy of this game was provided by Developer/Publisher/Distributor/PR Agency for review purposes. Click here to know more about our Reviews Policy.