In this crowded arena, a new combatant enters. Skullgirls is a downloadable, stylized 2D fighter, that sexualizes its (entirely female) characters heavily to attract immediate attention, but also hides underneath all that eye candy a really well done battle system.

The thing that catches your eye before anything else at all are Skullgirls’ characters. These fighters are all suggestively dressed in skin tight clothing, that reveals more than it hides, with busty chests and perfect cleavages, long legs, and all the right curves in all the right places, in just the right quantities. They all look pretty attractive, and the game’s graphical style, which is that of a highly stylized cartoon, does wonders in adding to their appeal.

Of course, all this visual oomph is there to catch your attention immediately, and to keep it. But style can only sustain a game for so long, and Skullgirls backs up its stylish and sexualized look with some substance- an incredibly deep fighting system that sticks to the norm, but tweaks conventions to present an entirely new take on a genre that is otherwise quite static. 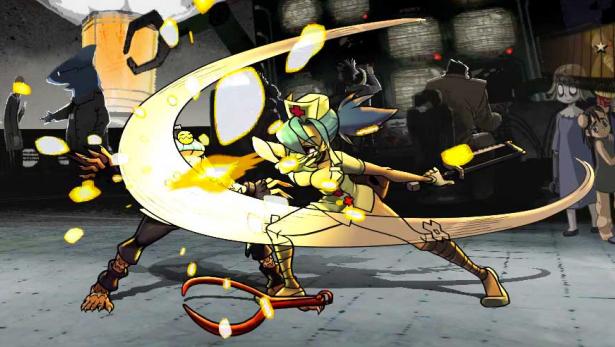 For instance, let’s take a look at how this game handles tag team fighting. Skullgirls lets you take one, two, or three fighters with you into the arena. However, your opponent is not bound to bring in the same number of fighters into the ring as you, meaning that it is entirely possible that you bring in just one fighter, while your opponent brings in a full roster of three.

Why then would you choose to bring in any less than your full roster strength? Because the game balances this out expertly. Selecting just one fighter means that your one fighter is more powerful than any of the three fighters on the opponent’s team are individually, meaning that you can take more damage than they can, and your blows will also be more powerful. On the other hand, selecting two or three fighters means you can perform powerful linked hyper combos, and assist attacks. It also means that your fighters can recover health while they are tagged out.

It’s a neat little system of balance, that naturally provides incentives to go with either of the options available to you, and it ensures that fights are always fair, always even. It encourages players to try out different strategies and combinations to see what works best, and considering the sheer number of different characters, it opens up a mind boggling amount of options for the player; just because a two player tag team didn’t work with a certain set of characters doesn’t mean that it won’t work if you mix up your roster a bit. The game incentivizes experimentation and encourages it. The fact that fights aren’t locked or determined by roster strength per person- you can bring in three fighters into the arena, while your opponent might bring in only one- keeps things interesting too. All in all, the game’s take on tag team fighting is certainly one of its more compelling mechanisms.

Fights are also incredibly fast paced, focused, and slick. Getting rid of regular fighting game annoyances, like infinite chains and unblockable attacks by context sensitive abilities that are activated only if your opponent attempts to use either of those, the game concentrates on the actual fighting between the two characters on screen, rather than degenerating into a race to the bottom with both you and your opponent trying to activate some sort of infinite one hit combo to finish the fight quickly. This means that even relative novices can enjoy the game- even though they will always lose to more skilled players (this isn’t Super Smash Bros., after all), it will never appear to them as if they were hopelessly dominated, and psychologically, the game remains inviting to all players, while still remaining appealing to the experts and pros who will inevitably practice this game for hours at end, getting to know all its ins and outs. 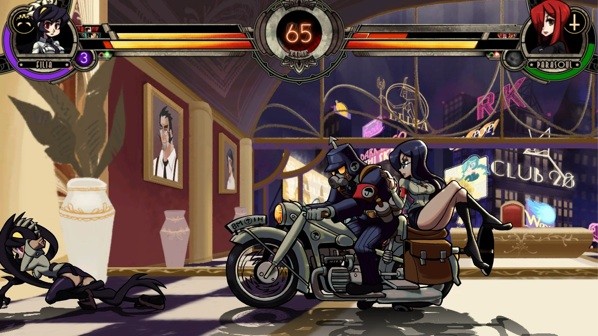 Like all other fighters, Skullgirls features a story mode. Also like all other fighters, it isn’t anything to write home about, with the politest thing that I can say about it being that it breaks the player into the intricacies of the game pretty well. The dialog is pretty bad, and the story, which centers on every character out to gain a supreme power called the Skull Heart. It’s contrived and banal, and all in all, if you’re playing Skullgirls for the story, you’re doing something wrong.

With some great mechanics, slick graphics, a busty cast that will put a smile on your face, and a setup tailor made for competitive fighting, Skullgirls is a game that is highly recommended to all fighting game enthusiasts. It’s definitely one of the better entries in the genre out there, and is a game that, at its current price, every fighting fan should check out; I mean, at $15, you really don’t have much of an excuse to not at least give it a shot. Especially not when it’s so packed with content, and unique takes on established fighting game conventions.

Well balanced with intricate mechanics, inviting to everyone, well tailored for competitive play

Final Verdict:
SUPERB
Skullgirls is packed with content, and a fresh new take on an otherwise stagnant genre.
A copy of this game was provided by Developer/Publisher/Distributor/PR Agency for review purposes. Click here to know more about our Reviews Policy.