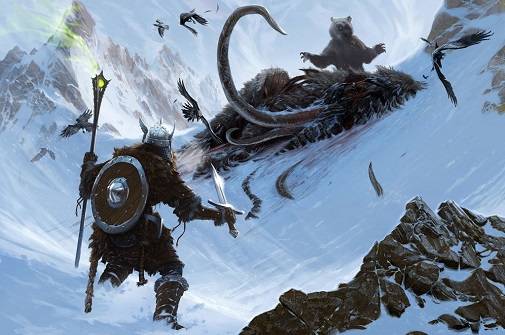 Bethesda has announced that beta 1.7 update is now available on Steam and is planned to be rolled out on the PS3 and Xbox 360 as well. PS3 patch contains fixes and improvements from patch 1.6 which will be included in patch 1.7.

No reason given as to why this is, but they have mentioned that they will be announcing more details on this soon. Meanwhile, you can check out the full list of beta 1.7 below along with instructions as to how to access it on Steam.

The cool image embedded above shows a bear eating a mammoth and threatening the Dovahkiin i.e., you. So what would you do? I suggest using a shout to blow it away from the mountain.

Update 1.7 (all platforms unless specified

To provide feedback on the beta update, use our beta forum.

After the break, get details on how to participate in the Steam Beta.

DOWNLOADING THE BETA UPDATE ON STEAM

If you opt into the Beta, be sure to back up your saved games or simply be careful not to overwrite your existing saves. If you decide to opt out of the beta program, your old saves will still work with the current release of Skyrim on Steam (v 1.6).

If you decide you don’t want to run the Beta anymore, redo steps 1 – 4. At the drop down, select NONE – Opt out of all beta programs. Let Steam restart, and Skyrim will automatically update itself back to the latest released version.