Independent games may still be comparably smaller to mainstream releases but the overall development has been moving towards better visuals, more professional looking production values and so on. However, among the many indie titles, there are few that can be considered as niche as Fire Face’s Small Radios Big Televisions. Fire Face, the one man studio helmed by Owen Deery, is bringing its creation from the realm of browser-based games to the PlayStation 4. You wouldn’t think an adventure game could become even more niche in its concept than allowing players to enter into the worlds of different analog devices. But you’ve never seen anything like Small Radios Big Televisions.

GamingBolt spoke to Deery about his project including the changes made with its transition to the PS4, the concept itself, the chances of an Xbox One release and much more. 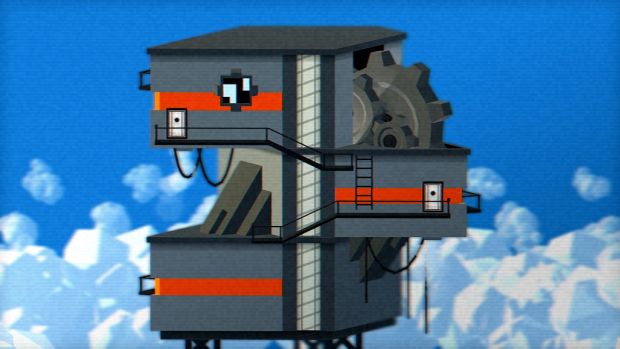 "Largely the game is focused on exploration and experimentation. Winding your way through the factories, discovering tapes (among other things), finding different things to warp them."

Rashid K. Sayed: What has it been like to develop something Small Radios Big Televisions completely on your own? How do you feel things have changed in terms of what solitary developers can achieve with today’s technology?

Owen Deery: Working on this project alone has been hard, but it’s a lot of fun. It’s really easy to get burnt out working on a big project but with Small Radios Big Televisions I can switch to working on music or art or level design if I feel stuck when programming and then come back later with a clear head. Things have never been better for solitary developers!

It’s so easy to learn about any aspect of game development just by searching or even asking someone on Twitter. The recent influx of free game engines also allows lone developers to tackle much bigger projects than before. The console makers push to open access to smaller teams is huge as well. A few years ago no one would have let me near a console.Small Radios Big Televisions has an intriguing premise, one that an almost old-time feel to it.

Rashid K. Sayed: How did you originally conceive of the idea for the game?

Owen Deery: I wish I could say that there was one specific thing that ‘inspired’ me, but it was really just sitting down to come up with ideas. Last Summer I decided to take a few weeks off from making web games and build something cool that people might enjoy that I wouldn’t have to worry about selling to a web portal.

I sat down and wrote 20-30 quick ideas and the core idea for Small Radios Big Televisions happened to be the second one and the one I liked the most.

Rashid K. Sayed: The original browser version of the game seemed to dwell more on phenomena like natural distortion and the effect produced by decaying magnetic tape. Are those still present in the PS4 release and how you best present these various concepts to players?

Owen Deery: Definitely! A big part of the game is a focus on analog distortion and decay rather than digital. A lot of the time if something digital gets distorted or loses some of its data then it simply won’t work anymore (like scratching a CD). That’s one of the cool things to explore with analog media, that when the data gets changed it will be played back with errors and everything.

Rashid K. Sayed: Thus far, what little we’ve seen of the game indicates collecting these cassettes which have entire worlds contained in them. But what does one do in the game in terms of actual gameplay?

Owen Deery: Largely the game is focused on exploration and experimentation. Winding your way through the factories, discovering tapes (among other things), finding different things to warp them. There’s also a big point-and-click influence on the game, so there are a lot of environmental puzzles throughout as well. 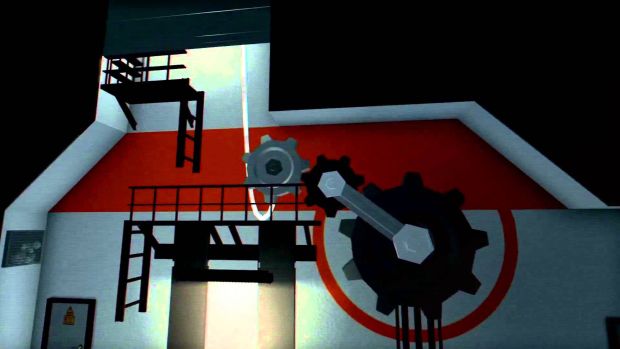 "I put the original version of the game online for free to see if there would be anyone interested in it, and a bunch of people were so I decided I’d try to make it into a full-sized game."

Rashid K. Sayed: What engine have you developed Small Radios Big Televisions on?

Owen Deery: Small Radios Big Televisions is written from scratch in C++. I’m using a library to handle a lot of the input and sound stuff on PC, but otherwise I’ve written everything else. The original web version was written in Javascript using WebGL.

Rashid K. Sayed: What kind of length is Small Radios Big Televisions targeting? Will there be a reason for players to go back and explore more?

Owen Deery: At the moment that game is still very deep in development so I don’t have a specific number, but ideally I’d like it to be a 4-5 hour experience. There are winding, branching paths and extra tapes not essential to the game in the world so if a player wanted to “100%” the game there’s reason for them to continue exploring.

Rashid K. Sayed: Tell us more about the sound design and music. What famous artistes or bands helped you to properly identify and capture the synthesized feel of the soundtrack?

Owen Deery: The sound and music of the game is hugely important to me, more so than any other project I’ve worked on. I’ve had an idea for the musical feel of the game pretty much before anything else. I made up a playlist as soon as I started working on the game that I would listen to while figuring out visual style etc. and try and make everything work together.

Boards of Canada are a big one and what most people compare the music from the game to. Other big influences were Neon Indian, MegaDrive and Lazerhawk. One resource which was invaluable for finding new music I could draw from was Adult Swim bumps. You can go online and watch the little segments that they air between shows and usually they have some of the coolest music I haven’t heard of, and that made up a big chunk of my playlist.

Rashid K. Sayed: What motivated you to bring Small Radios Big Televisions to the PS4 and is there a chance it could arrive on other platforms (besides PC of course) at a later date?

Owen Deery: I put the original version of the game online for free to see if there would be anyone interested in it, and a bunch of people were so I decided I’d try to make it into a full-sized game. In October I was at a games festival in Toronto called Gamercamp, where Sony was doing a presentation about bringing games to PS4.

I just went up and asked, “Hey, maybe I could put my game on PS4?” and that was pretty much it. I would love to bring the game to as many platforms as I can but at the moment I’m focused on PC and PS4 since I want to give them the attention they deserve, and I don’t really have time to work on other platforms.

" At some point it would be cool to do an Xbox One version if I get the chance. I spoke to both Sony and Microsoft reps at the same event and after emailing them both Sony was the only one that ever emailed me back."

Rashid K. Sayed: How has your experience developing on the PS4 been till now and how does it differ from PC development?

Owen Deery: I’ve only very recently been given access to the PS4 development ecosystem since there’s a lot of paperwork to go through, but so far it’s been a very positive experience. There’s so much they’re doing for small developers that you realize how difficult it would have been for earlier console generations.

It can be very overwhelming to come face to face with a new system that until now has been hidden behind a curtain, but at the same time it’s nice to know that if you can get it running on a PS4 it will run on every PS4. On a PC you have to do extensive testing just to make sure it will run on most systems.

Rashid K. Sayed: You’ve talked about possibly bringing the game to the Vita but focusing on the PS4 version since it’s only you developing it. What features about the Vita intrigue you and how could they be used if you do decide to bring Small Radios Big Televisions to the handheld?

Owen Deery: I’m not a handheld gamer (I think my last handheld was a GameBoy Pocket?) so I honestly can’t speak to the capabilities of the Vita personally. This just goes hand in hand with the earlier question of wanting to get the game onto any platform that players might want it on. Once the game has its initial release then I’ll be able to see if there’s large enough demand for a Vita release.

Rashid K. Sayed: Is there a specific reason why the game is not coming on the Xbox One?

Owen Deery: Nope! At some point it would be cool to do an Xbox One version if I get the chance. I spoke to both Sony and Microsoft reps at the same event and after emailing them both Sony was the only one that ever emailed me back.

I approached a rep from Microsoft at the same event last Autumn where I talked to the Sony reps. I talked to them briefly about my game and working on it for id@xbox, and then I sent some follow up emails but never got a response. By that point Sony had already replied and said they wanted my game so I ran with that and forgot about Microsoft. 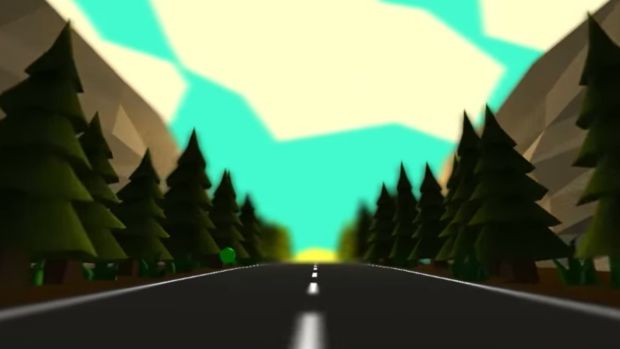 "I’ve always had a thing for writing my own rendering systems, so it’s really nice to see a wave of technology that looks like it will try to wipe out all the old legacy code and structure from graphics APIs."

Rashid K. Sayed: What are your thoughts on the PS4’s unified architecture? Is it safe to assume it’s a super charged PC?

Owen Deery: I can’t really give an opinion on it at this point since I’ve only been working with the system for a few weeks.

Rashid K. Sayed: Will the game run at 1080p and 60 frames per second? Furthermore, did you face any challenges achieving that target?

Owen Deery: That’s the ideal that I’m shooting for. On my non-cutting edge PC it’s already up to that spec, and I’m still working on porting to PS4 so no word yet. I don’t expect it should be a big problem since the game is not very graphically intensive.

Owen Deery: I’m really interested in these new explicit graphics APIs (Vulkan, Mantle). I’ve always had a thing for writing my own rendering systems, so it’s really nice to see a wave of technology that looks like it will try to wipe out all the old legacy code and structure from graphics APIs. I’m not writing crazy intensive renderers like you’d find in the Unreal Engine or triple A games, so chances are it won’t affect my projects too much but it’s nice to see the industry try and take a big step forward.

Owen Deery: If you want to hear about the development of the game follow me @owendeery on Twitter, I do my best to try and post interesting shots of the game while I’m making it!