The FPS is a versatile genre. It’s comfortable on both PC and the home consoles and is able to grab the attention of almost any gamer, provided the mechanics are solid. It’s because of this versatility that first person shooters are coming out a dime a dozen, and each one now requires that special something to give it a leg up over the competition. Sniper: Ghost Warrior attempts to create realistic and engaging sniping physics in order to separate itself from similar titles, but is it enough to put it in the same league as the big boys?

So I mentioned the “realistic sniping physics,” and you’re probably wondering whether that just means the guns aren’t very accurate. Well thankfully this isn’t the case. When sniping over long distances the game takes into account aspects such as bullet drop, wind direction, breathing patterns and even your character’s pulse and you have to compensate for all of these if you want to keep your shots accurate. The game does give you a bit of assistance though by providing a handy little red dot that shows where your shot is going to land when you focus your scope on a single area for a certain amount of time. Not much else needs to be explained about the sniping, as once you’ve learnt all this, it’s still just a matter of putting the bullets in the other guys head. It must be noted though that the core sniping mechanics are solid, satisfying and a lot of fun. When you nail the head-shot from a certain distance the camera shifts to a slow motion third person perspective showing the bullet’s path. It won’t win any awards for originality, but it always hits the spot and never gets old. 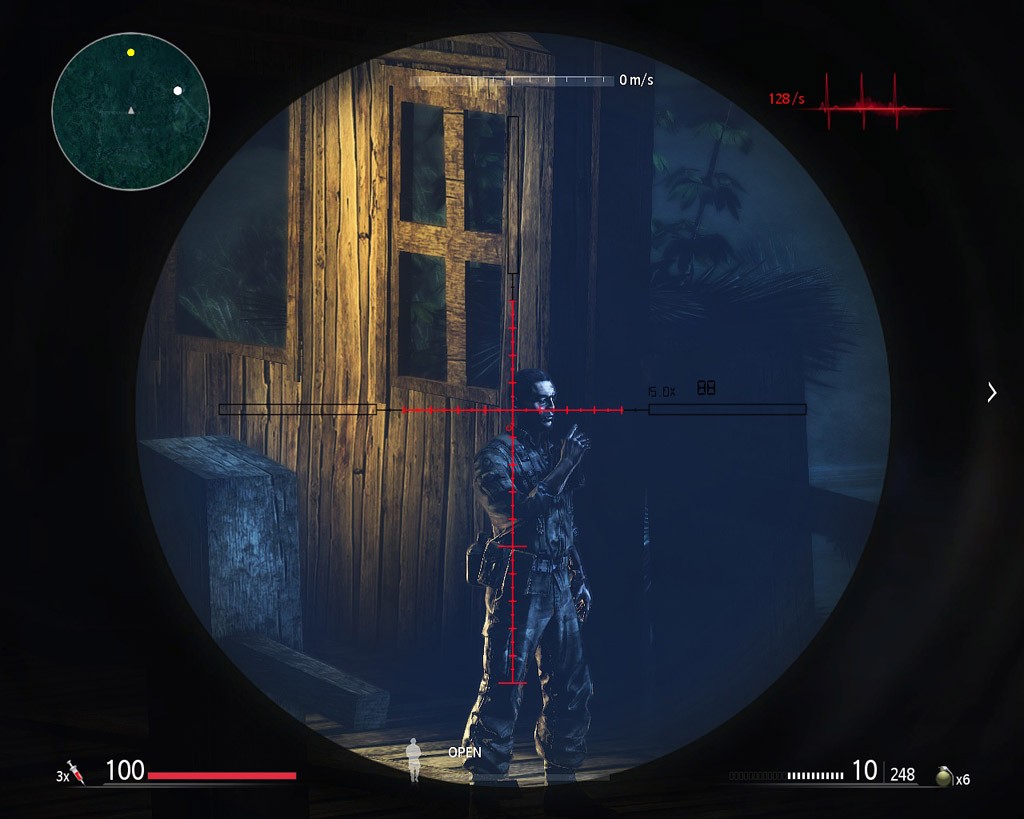 If only the whole game could be like this…

That’s about as positive as I’m going to get about this particular title. The developers clearly realised (and rightly so) that the game would get boring if all you ever did was snipe, so they try to mix up the formula now and then. They do this in some clever ways that see you swap between playing assault troops on the ground one minute, then their sniper support the next. As nice as this narrative technique was, the actual gun-play when using assault rifles, pistols, or any non-sniper rifle for that matter is horrendous. With a sniper you feel like the patient lone wolf with the quick reflexes, but put an SMG in the same guys hands and he controls like the town drunk on a night out. The bullets just don’t seem to ever go where you point your gun, and the lack of health that usually adds a nice challenge to the sniping sections just becomes annoying when you get up close.

I ought to clarify that whilst the sniping sections are much more fun than their run and gun counterparts, the sniping isn’t always sunshine and giggles. Some of the sniping parts require a stealthy approach, but the sneaking mechanics in the game are just plain broken due to a rather bizarre AI. Sometimes you can shake a guards hand and tell him a “yo momma” joke and he won’t give you a second look, then the next minute another tango will somehow communicate with the trees and wind and locate you from the other side of the map. Maybe this guy just happens to have magical powers and that’s the point, but no normal guy should be able to see a guy crouching down in a ghillie suit from that distance. The guards also have the rather unique ability to communicate with each other telepathically and so if one guy sees you, then every enemy on the map magically knows of your exact location. I don’t care what technical limitations, time restrictions or any other hiccups the developers would use to excuse this, but it’s a game destroying irritant that is present in far too many titles these days. Sort it out people. 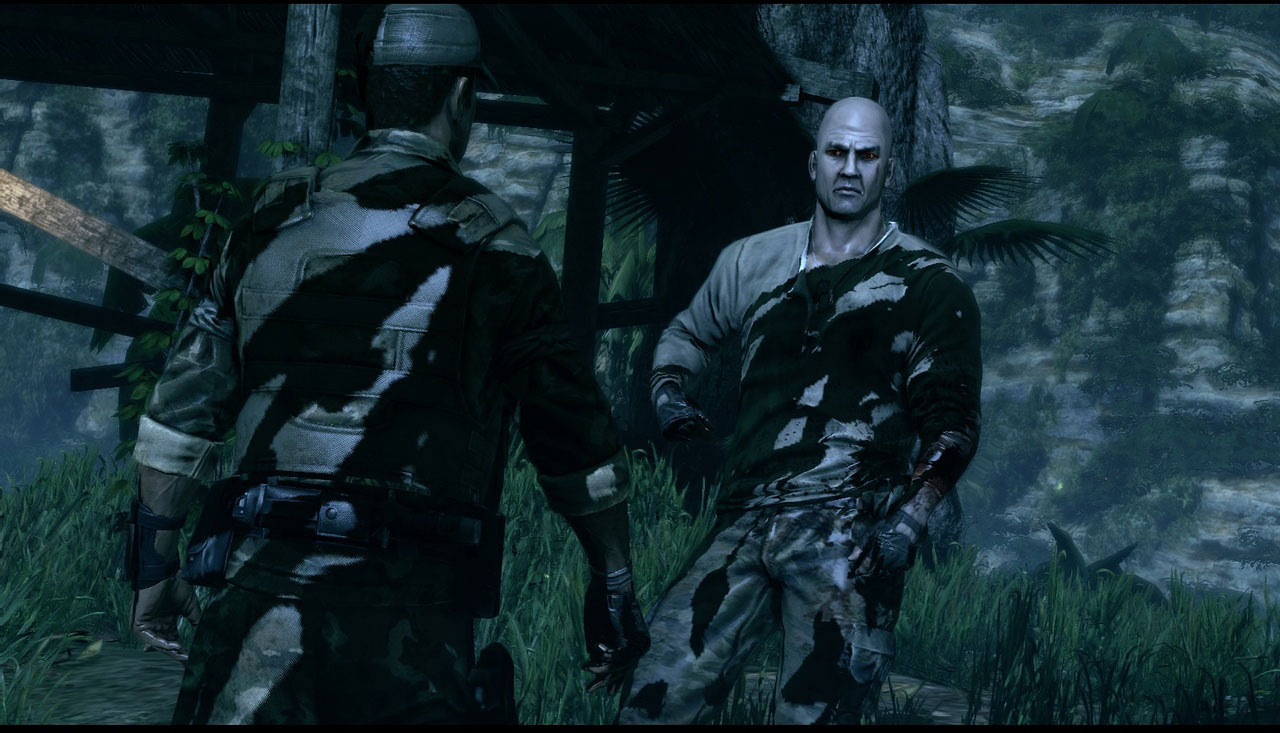 A meeting of the minds; two characters as uninspired as each other

If it’s not bad enough that the good sections of the game are generally underused, then the paint by numbers level design and lack of equipment really pushes it over the edge. Even the control scheme is an almost identical rip from Call of Duty. Whilst this will make the majority of players feel right at home, it just typifies the lack of creativity on offer in Sniper: Ghost Warrior. Apart from the sniping physics this game is a case of first person shooting by the book in the worst way possible and it has very little to distinguish it from similar titles.

Unfortunately it also bears the classic FPS hallmark of having poorly fleshed out characters and a very stale plot. You inhabit the body of various army guys who may as well not have names as they are so generic and inter-changeable. Your team is tasked with going into a fictional area of tropical jungle to kill some dude who is peddling drugs. It’s about as wishy washy and dull as it sounds, and who knows I’ve already killed enough drug cartel leaders in the African sub-continent throughout my gaming years. There is no excuse for the limited plot on display throughout, and I would go as far as saying that this lacklustre effort defines exactly why games are not taken as a serious storytelling medium.

Sadly Sniper: Ghost Warrior doesn’t follow suit with many of the more popular FPS games of this generation in terms of presentation. The graphics for a start are just very 2001. Considering the game is set in a jungle and that you are therefore going to see a lot of foliage, it becomes very frustrating when trees, leaves and plants are all so poorly rendered. The whole visual aesthetic just looks plain odd. The worst offender happens to be an odd shimmer effect on the water that makes your character look partially transparent when he’s close to it. Maybe that’s what the “Ghost” in the tile is referring to? It would certainly make a lot more sense than the abundant graphical glitches that are on show. 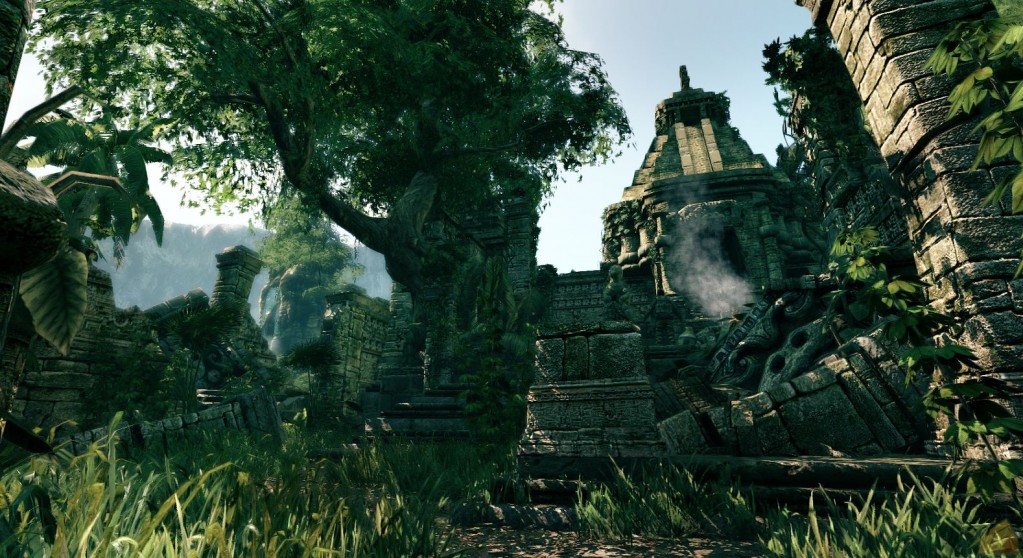 They look nice enough in a still, but the visuals are truly uninspired when you see them in motion

The sound is likewise poor with unsatisfying sound effects and horribly generic voice acting. “Hey, why don’t we make our hero sound like yet another rough, tough all-American macho man?” Great thinking team… An odd oasis in this desert of mediocrity came in the form of the soundtrack, which actually surprised me on a few occasions with some tension building dissonant harmonies that really worked. It only reared its head once or twice, but it certainly added a new dynamic that the game was otherwise lacking aurally

At least if you happen to be the sniping enthusiast that this game is aimed at then you might find a whole lot to love in Ghost Warrior. The story mode is surprisingly long, offering upwards of eight hours not including the inevitable hunt for collectibles. Multiplayer further adds to the pot, yet it is horribly bland and lacking in weapons, even if the maps are quite well designed. It isn’t necessarily bad, but your time would be better spent having a few games of halo instead. The one aspect of lifespan where Sniper falls flat is the achievement list. It’s reasonably well balanced, but there are some very simple tasks that reward a ridiculous amount of points. Kill two enemies with one grenade for 40G… Far too much for such a small feat.

Sniper: Ghost Warrior is riddled with clichés, and its poor gunplay and predictable story mode prevent it from being any more than an okay title at best. That said it handles the sniping quite well, and that on its own offers a good deal of satisfaction. There are certainly worse ways to spend your dough, but unless you really haven’t got anything else to play at the moment you’d be better off investing your time and money elsewhere.

Shooting mechanics are almost unbearable when you use any gun aside from a sniper, repetitive missions, Boring multiplayer, Lame story, Embarrassing visuals

Final Verdict:
MEDIOCRE
Sniper: Ghost Warrior, with its underused sniping mechanics, poorly implemented stealth and stilted gun-play, makes you feel neither like a sniper, a ghost or a warrior
A copy of this game was provided by Developer/Publisher/Distributor/PR Agency for review purposes. Click here to know more about our Reviews Policy.