Posted By George Reith | On 02nd, Jan. 2012 Under Reviews | Follow This Author @GNReith

Sonic hasn’t been at his best over the past decade. Indeed, Sega seemed to be mishandling Sonic and his now “radical” style at every turn, but things have been looking up with the awesome Sonic Generations. For those of you who don’t read our reviews regularly, (shame on you) you can check out our lavish praise for Sonic Generations in our review here. Having enjoyed the game on consoles, I expected the 3DS version to offer me a similar experience. It was meant to be modelled on the Sonic Rush series on DS, arguably the strongest Sonic titles of the past decade. Knowing this, I looked forward to some classic Sonic action but, whilst Generations offers the same sense of speed and solid level design, it’s missing a certain something that prevents it from exuding the undeniable charm of its console brethren.

The plot involves a bizarre dimensional portal that throws retro and modern Sonic together and, with an evil force imprisoning their friends, the two Sonics team up to save the day. It’s a bit of an excuse for the whole “multiple Sonics” plot device, but one that never takes itself to seriously. And, let’s be honest, if you’re playing Sonic for a meaningful story, you’re probably a bit of a tool anyway.

So far things follow the console version of Generations to the letter, but the structure of the 3DS version differs greatly. First and foremost is the levels themselves, with minimal crossover between the two versions. To get a whole new set of levels from different areas of Sonic history was a bit of a treat, and the level design itself is equally as strong as console versions of the game. The problem is how you access said levels. Whilst the console versions of Generations offered a hub world where you entered your levels and sub-missions, the 3DS Generations just uses menus you scroll through. This isn’t exactly new for a hand-held title, but it makes the 3DS version feel very linear and static by comparison. 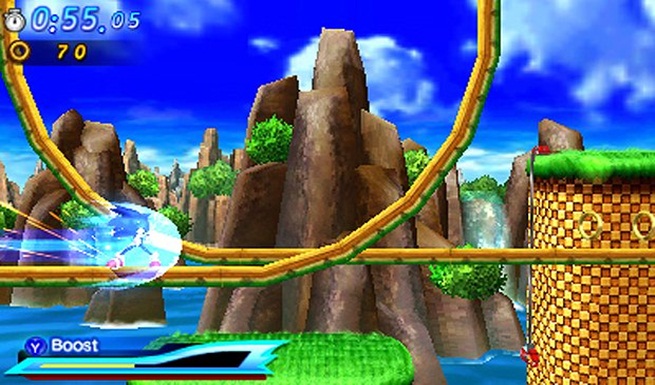 The levels are well designed, but the hub world of the console version is sorely absent

The gameplay also differs, if only marginally. Classic Sonic plays identically between both versions, with the old-school 2D Sonic gameplay you know and love. It all provides a decent sense of speed, and is easy to get into. The problem is modern Sonic, who’s awesome perspective shifting gameplay wowed me in the console version, has been figuratively castrated on 3DS. He plays in an almost identical fashion to classic Sonic now, albeit with a few different abilities and very minor and passive 3D segments. Not only does this largely eliminate the cool transitions between 2D and 3D perspectives, but it also means that Sonic Generations on 3DS is a much more repetitive affair than console versions of the game.

For a hand-held title, Generations is dressed to impress on the 3DS. Though it is never going to reach the lofty heights established by the visuals of Generations on consoles, the production values and level of visual polish on the 3DS version of Generations is commendable. The only issue lies in the console’s stereoscopic 3D capabilities, a trick that is woefully underused in a largely 2D title like Sonic Generations. The 3D images are there, and they add a nice sense of depth to the background, but they aren’t going to be dropping any jaws to the floor on account of Generation’s genre. The main other graphical issue in the game is the cut scenes. There aren’t a lot considering how light on story the game is, but the few that are there are done with static character models and text. Considering so many other games on 3DS have managed proper cut scenes complete with voice acting, it’s disappointing that Generations doesn’t even attempt this. 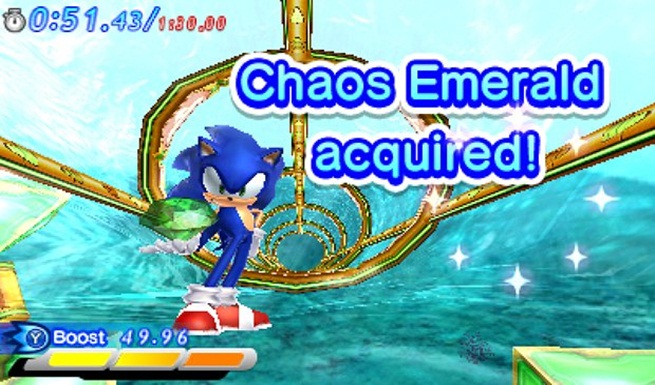 For the good that Generations does, there is an element of a lifespan problem. Though there are enough levels and a series of challenges to keep you coming back, the game remains shorter than any of the Rush games on DS, a true shame considering the inevitable comparisons that will be made. The other issue with Generations is its lack of a certain X factor. This one is tough to explain in words alone, but there is just something missing from Generations on 3DS, an undeniable charm that was present in console versions of the game. Even the Rush games on DS had a certain flair to them that Generations is missing. It’s a shame really as it leaves Generations feeling a little flat in comparison to other successful Sonic games of the past few years. That’s not to say Generations is a bad game, as any platforming enthusiast will find something to enjoy here. It’s just a tough sell at full price. If you like classic Sonic gameplay, wait off until the game drops in price, then Generations will be really worth your time.

A classic Sonic adventure that doesn't quite live up to the lofty heights set by its console counterpart, Sonic Generations on 3DS is an enjoyable 2D platformer that doesn't have any truly defining or engrossing features

A copy of this game was provided by developer/publisher for review purposes. Click here to know more about our Reviews Policy.
Tagged With: 3DS, Sonic Generations