Posted By George Reith | On 16th, Jul. 2012 Under Reviews | Follow This Author @GNReith

Having spent what feels like forever trying to dominate the 3D platformer, Sonic Team have finally noticed that they weren’t fooling anyone, and have since returned to the 2D realm with the help of co-developer Dimps. Cue the expected hype around Sonic’s glorious return to the second dimension of old but, as you can read in our review, the first part of Sonic 4 wasn’t exactly the return to form that fans were hoping for. With a large gap between the two episodes, Sonic 4 Episode 2 feels more like a full sequel than an episodic add-on, with a large list of additions and changes. Sadly, none of these alterations serve to remedy the problems with the first Sonic 4 episode, with many of the gameplay tweaks adding their own host of issues rather than fixing them.

Episode 2 brings back the classic 2D Sonic gameplay of old, but it features several inclusions that make it more like a re-tread of Sonic 2 than any other titles in the series. You may have guessed then that the biggest new inclusion is that of Sonic’s partner and cohort, Miles Tails Prower. Tails is as you remembered him from your childhood, complete with limited flying abilities and the nifty ability to carry Sonic along as well for a short amount of time. This teamwork element introduced by Tail’s flying has been capitalised upon in Episode 2, with a dedicated button for activating team manoeuvres. These range from making the duo fly, rolling up together into a big ball of death and even include the ability for Tails to use his namesake as a propeller underwater. These co-op moves are a fun addition and don’t complicate the classic formula like you’d think, but they introduce a big problem that is the veritable death of Sonic 4: The lack of speed. 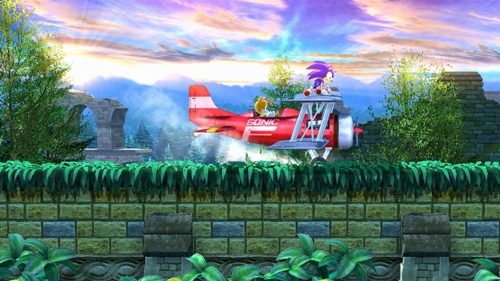 Don’t let the nostalgia fool you, this is a wolf in hedgehog’s clothing.

If you ask anyone what they loved about Sonic on the Mega Drive/Genesis, they’ll probably bring up the sense of speed. Well those team moves I just mentioned are the demise of this speed, as they are preceded by a second-long start up animation. It might not sound too bad on paper, but when you use these moves at least ten times a level, it really starts to kill any sense of momentum. This is an issue that occurs time and time again, but it is further troubled by the level design, which has absolutely no problem with forcing you to use these co-op moves with alarming regularity. The levels also feel very obtuse in comparison to the Sonic I remember. Whereas good Sonic games feature levels that aid you in running really fast, Episode 2 seems happy to throw roadblocks up at you every other second, and the amount of times it funnels you into a veritable death trap boarders on sadistic. That’s not to say Episode 2 is even all that hard, as the levels don’t challenge as much as slow down the game and inevitably annoy series fans as a result.

Even when you do get a clean break, the speed just isn’t there. This is largely due to changes within the engine itself. It seems many were unhappy with Sonic 4 Episode 1 for, whilst the game felt quite fast, the platforming mechanics lacked solidarity. In order to prevent Sonic from feeling too “floaty” this time around, it seems Dimps’ solution was to nail the hedgehog’s feet in place. It is possible after some time to pick up momentum with the high-speed rodent, but the initial start of each run is painfully slow. Oh, and remember those co-op moves and dodgy level designs from earlier? Well each time one of these irritants shows up, it’s back to the start with your speed, leading to painfully slow start after painfully slow start. When the platforming does come in, it does have a good weight to it, but at what cost? 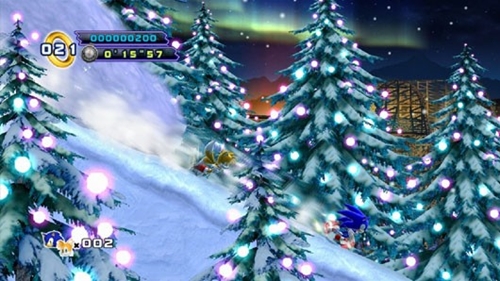 Gameplay gimmicks clearly demonstrate the lack of faith Dimps have in the core gameplay of Episode 2.

Fully attempting to capitalise on the partner structure granted by Tails, Episode 2 includes split-screen and online co-op. It’s a fun way to run through the game with a friend, and it does bring back fond memories of when you finally worked out the second controller on the Mega Drive controlled Tails in Sonic 2 and 3. That said, it has one too many problems to truly maximise its potential. The camera remains a point of contention as it did in the original Mega Drive classics as, if one player speeds up too far ahead, the other player is still mercilessly dragged along by the camera. The co-op moves also feel underwhelming, as one player only needs to hit the X/Square button to use them. You’d think they’d have thought this one out a bit better, as it makes the co-op mode feel particular uncooperative.

As far as presentation is concerned it’s one of the few areas where Episode 2 really shines. The graphics and animation are top-notch, adding a slickness and grace that almost makes up for the game’s lack of speed; Almost. The audio offers a pleasant blast from the past, with the same sound effects and midi chirps that we fell in love with all those years ago. I will say that the music is somewhat disappointing though, offering a far cry from the memorable tunes of the early Sonic titles, but it isn’t a bad score overall. 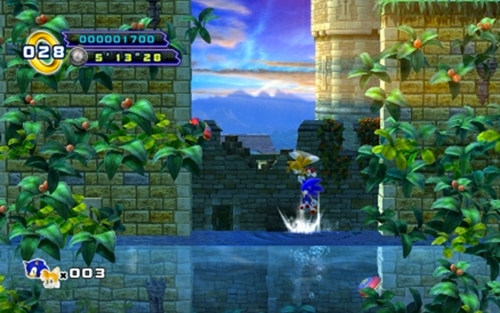 Co-op can be fun, but the camera limitations prevent it from being truly special.

As far as value is concerned, it offers about the same content as Sonic 2 and 3 do, with a half dozen stages, chaos emerald collection for completionists and a fun, but rather flawed, co-op mode. Boss stages also lengthen things out, though this is usually due to poor and pedantic design rather than extra content, so look forward to enduring those as you make your way through. The Achievements list is also refreshingly challenging, but the inclusion of an achievement for playing as Tails 50 times seems like a bit of an artificial game lengthener; a cheap device that crops up in one too many achievement lists these days.

If you’re a diehard Sonic loyalist, this is probably in your download cue already, but if you’re just looking for the next hit of retro platforming, Sonic 4 Episode 2 is an extremely hard sell. It’s not all bad but, if you ask any Sonic fan what they loved most about the originals, it’s likely to be the crisp level design and satisfying sense of speed; two essential ingredients that are woefully absent from this slice of the Sonic the Hedgehog pie. Even if you liked Episode 1, I’d recommend giving up on Sonic the Hedgehog 4 unless Dimps do some serious tinkering with Episode 3.

This game was reviewed on Xbox 360

Crisp visuals, Nostalgic use of audio, Tails is now a playable character, Split-screen is amusing

Sega's continued attempt to make Sonic relevant again has lead to this episodic sequel to Sonic 4 and, just like its predecessor, Episode 2 still fails to recapture the magic of the original Sonic trilogy

A copy of this game was provided by developer/publisher for review purposes. Click here to know more about our Reviews Policy.
Tagged With: dimps, PSN, psp, Sega, Sonic 4: Episode 2, XBLA