Do you remember that old family pet from your youth? You’d come down every morning to see old red or Mr. Biggins only to remember that he isn’t the same puppy he was when you first got him. He’s old hat now, and all you can do is watch your furry friend decay as the days go by. You keep pretending he’s okay, but you know deep inside that it’s only a matter of time. This same template can be applied to the career of mega drive mascot Sonic the Hedgehog. I’ve purchased nearly all the 3D Sonic games as of late in the hope that I would find at least something of worth in the package. Needless to say, I was bitterly disappointed each and every time, but now Sega have finally got round to what they should have doing all along and released another 2D Sonic adventure. Is it enough to make the spiky blue hedgehog relevant once more? 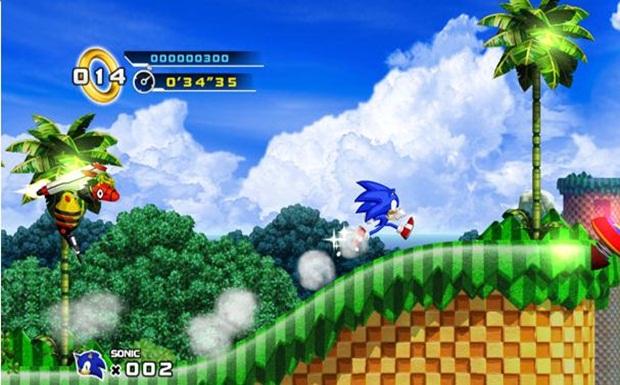 Sonic’s back in 2D- the way he should be

From the moment you fire up the title screen you can tell that Sega are trying to play up the retro aspects of the game. From the title screen music, to the arbitrary “defeat Dr. Eggman again” storyline, the game feels almost like a direct continuation of Sonic 3 (albeit with a significant leap in the graphics department.) In terms of the way the game plays it truly does feel worthy of the title of Sonic 4. You still run to the right side of the screen, you still collect rings and you still only need the D-pad and a single button. The only new addition to Sonic’s repertoire is the homing attack that has been ripped straight from the more recent 3D outings. It certainly helps make the game feel abit more up to date with modern titles but, whilst it isn’t a game destroying problem, there can be some issues with the homing attack that will lead to a few frustrating misses here and there. There are also several new speed traps and boosters that vary based on which stage you play. Nothing genre changing, but it helps Sonic 4 retain the same sense of speed and excitement that characterised the mega drive originals. It really does feel like a beautiful homecoming. 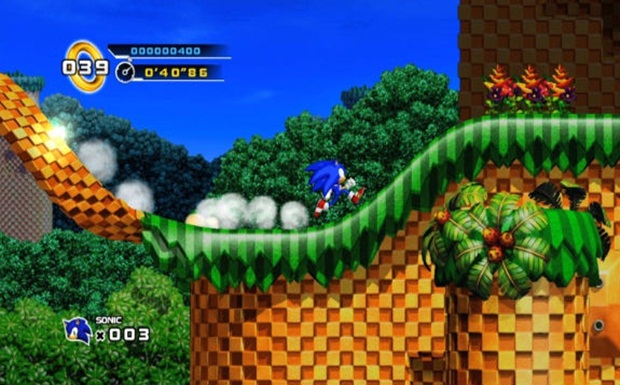 It’s a shame there are no new level ideas. I’m getting pretty tired of the Green Hill Zone…

The level design also reeks of these old school sensibilities, for better and for worse. A lot of the levels are fun and are just what you’d expect from the 2D Sonic titles of old, but they also have a tendency to throw up some really cheap jumps and puzzles, and some of the boss fights are plain ridiculous. Now don’t get me wrong, when it comes to old school games a little bit of a steep difficulty curve isn’t just welcome, it’s practically necessary. I usually relish the challenge, but in the case of Sonic 4 there’s something about it that just feels cheap. Really cheap. The lack of checkpoints can be damn annoying as well, and it really detracted from my enjoyment of some of the game’s later stages. The visual aspect of the level design also feels a bit stale in comparison to the rest of the game. I understand that they wanted to hark back to the golden days of Sonic, but a lot of the textures look like they were literally lifted from the original Sonic trilogy. Worse things have happened, but it certainly fails to inspire on a visual front.

In terms of the general graphics quality the best way to describe Sonic 4 would be smooth. The game looks pretty sweet running at 1080p and the frame rate never lags behind the fast paced action of the game. Some of the animations took me a while to get used too, but the static character and enemy designs do a good job of referencing the classic Sonic design, whilst simultaneously bringing it into the current generation of gaming. The sound does a similar job with the catchy, chirpy melodies we loved on the mega drive, but without going all the way and using cheap 16-bit midi sounds. My only criticism with the presentation of Sonic 4 is in the repetitive nature of the music, particularly in the boss fights. Combine the over-used boss melody with some of the cheapest stuff I’ve seen in a platformer for a while and you’ll learn to hate the bosses in Sonic 4. 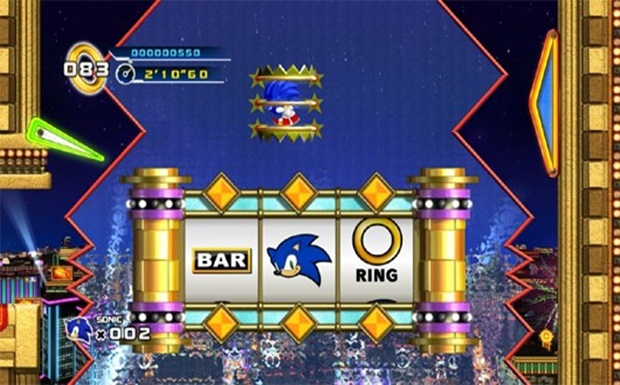 Wow another casino level? I’ve never played one of these in a Sonic game before…

Sonic 4 might not be perfect, but it’s still a game that is worthy of your time and money. Yet the short lifespan of the game prevents me from recommending it whole-heartedly. With only four worlds to go through Sonic 4 is unlikely to last more than a few hours of solid play. There are time attack modes, leaderboards and a decent achievement/trophy list to keep you coming back, but these are unlikely to lengthen the game’s longevity in any meaningful way. It is with this short lifespan that the pricing strategy becomes a real issue. This game is only meant to be the first part of Sonic 4. In spite of this it is still being priced as a 1200 point/ $14.99 whopper. This wouldn’t be too bad if it weren’t for the fact that I felt I wasn’t getting the full experience. Hell, they might have gotten away with it if they just pretended this was the full game, but knowing I wasn’t getting the full picture for the price bugged the hell out of me.

It’s a shame with Sonic 4 as, for all its flaws, it is a pretty solid addition to the series and it certainly beats playing another rubbish 3D Sonic game. That said it just all feels a bit too understated. If only it had come a few years earlier, or it was just a little bit cheaper, or there was just a little bit more content (like the full game cough, cough). Unfortunately for Sega they have done the right thing, but it has come far too late to properly redeem the Sonic franchise. I regretfully feel like Sonic has had his time. It was a fun ride, but it’s time we let the old hedgehog die in peace.

Sonic's back where he belongs, retro graphics and sound induce a great nostalgia, good sense of speed, kicks the crap out of all the recent 3D Sonic titles

Final Verdict:
GOOD
Sonic rises once more like a phoenix from the ashes, returning to the 2D plane where he belongs. Sadly, a poor pricing strategy and some cheap level design make the fourth instalment a case of too little too late
A copy of this game was provided by Developer/Publisher/Distributor/PR Agency for review purposes. Click here to know more about our Reviews Policy.