Spelunky is one of the most beloved and influential roguelike games of all time. It was lightning in a bottle, and it’s a game that players are obsessively pouring hours upon hours of their lives into to this day. It’s not surprising, then, that with its sequel, developers Mossmouth have taken an iterative approach rather than trying to reinvent the wheel.

That’s both a good and a bad thing. On one hand, Spelunky 2 offers the same tight platforming and addictive gameplay that its predecessor did, and by not trying to rewrite any of its most fundamental rules, it ensures that if you liked the first game, there’s no way you won’t enjoy the second. At the same time though, the lack of ambition feels a little disappointing, especially because the changes Spelunky 2 does make are some of its best elements, and I can’t shake the feeling that more of that would have elevated this great game into an even better one.

"Spelunky was lightning in a bottle, and it’s a game that players are obsessively pouring hours upon hours of their lives into to this day. It’s not surprising, then, that with its sequel, developers Mossmouth have taken an iterative approach rather than trying to reinvent the wheel."

In Spelunky 2, you play as Ana, the daughter of the first game’s protagonist. The core of the experience will be familiar to anyone who’s played Spelunky before. You dive down into caves filled with deadly booby traps and a variety of dangerous enemies, equipped with nothing but a whip, limited health, and a small number of bombs and ropes to help you descend deeper, all the while collecting treasure with which you can buy more weapons and items.

While movement in Spelunky 2 is fast (by default, your character now runs, while walking is delegated to holding down a button), it is imperative to survey your surroundings and proceed with caution. You never know what trap you might trigger, where an enemy might pop out to surprise you, what treasure you might be missing out on. Death comes quickly in Spelunky 2, and it comes very, very often, but as is the case with most roguelikes, each death is also a learning moment. That tile that shoots arrows might have surprised you at first, but going forward, you’ll always know to either avoid it, or throw something in front of it to trigger the trap before heading down yourself.

Platforming is still tight and precise. Your whip still doesn’t have a lot of reach, which means there’s always a risk-reward element to taking on enemies. Enemies themselves also exhibit a lot of variety, and force you to change how you approach any given situation on a near-constant basis. All of this is, of course, par for the course for anyone who’s played Spelunky, and that core formula hasn’t changed in the sequel. It’s good that the foundation of the game as as strong as it was in the first game- but since it doesn’t shake things up too much, it’s also largely similar.

"Death comes quickly in Spelunky 2, and it comes very, very often, but as is the case with most roguelikes, each death is also a learning moment."

That doesn’t mean there aren’t any new elements whatsoever. Spelunky 2 makes iterative changes that might not grab headlines, but do add to the gameplay experience, especially collectively, and especially as you play more and more. For instance, the introduction of mounts is a notable addition. Not only do they give you the ability to double jump and take an extra hit on your behalf (before perishing), each of them comes with its unique attributes, from flapping their wings to make falls slower and more controlled to breathing fire onto oncoming enemies.

Then there’s the fact that each time you complete a world, you can choose between one of two worlds to head to, which means that there’s more to see, more to explore, and more to discover. That, in turn, means that there’s an even smaller chance of you seeing a great deal of what the game has on offer even in a run where you get to the credits- which, finally, means much greater replay value than the original Spelunky, which is already one of the most replayable games you’ll ever play.

That’s one of the things most will like best about Spelunky 2- how much more expansive it feels. At the risk of repeating myself yet again, it may not feel like it’s too different from its predecessor, but it is, like any good sequel should be, bigger and better. There’s just so much to discover, so much to explore, so much to see, so much to learn. Spelunky was a game that players were learning new things about even years after it had launched, and I have no doubt in my mind that the same will be true for the sequel as well. 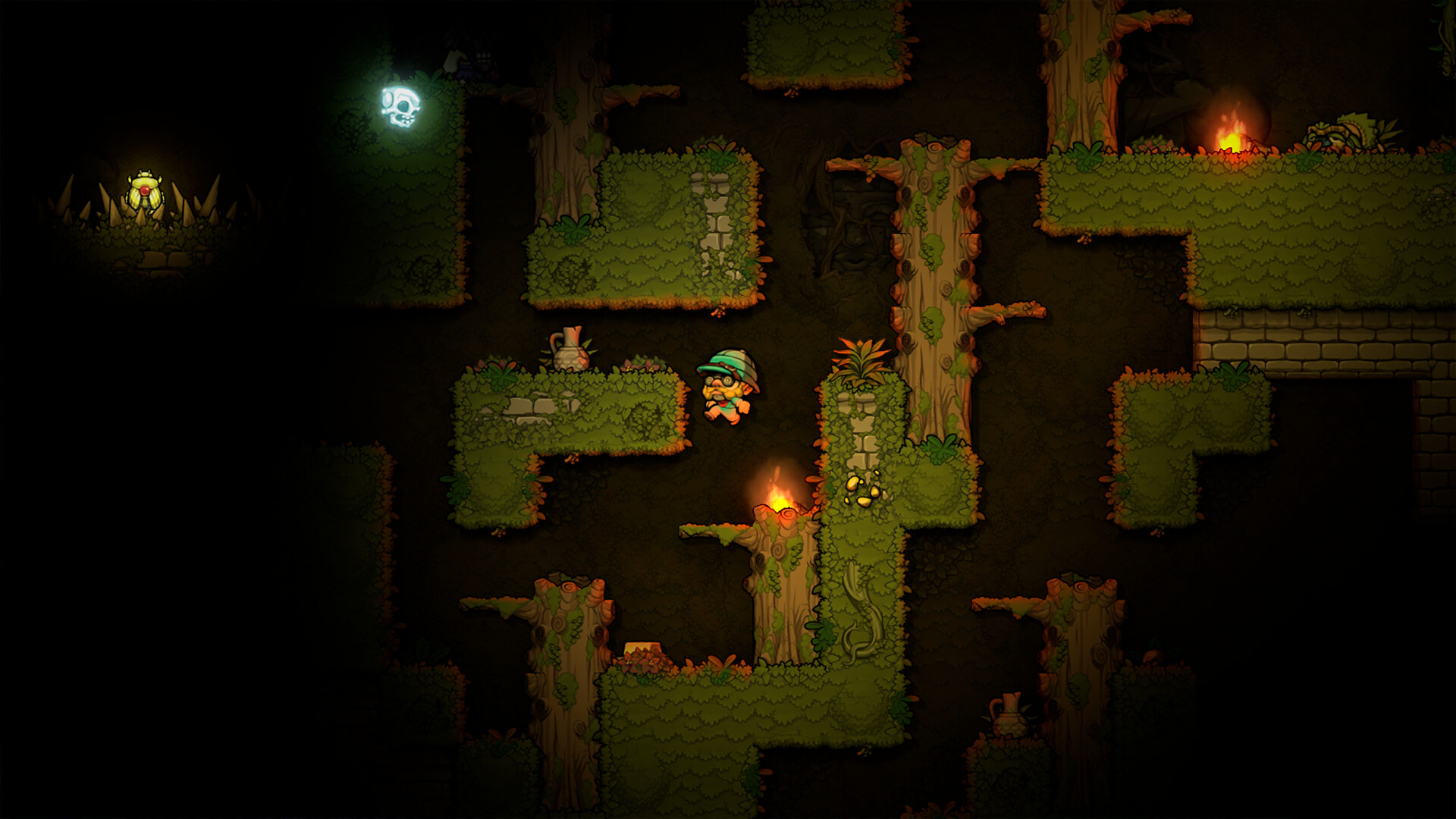 "Spelunky 2 makes iterative changes that might not grab headlines, but do add to the gameplay experience."

Levels in Spelunky 2 also have much more secret pathways and rooms hidden in the background, but this is perhaps the most disappointing new “improvement.” That’s largely due to the fact that these secret pathways don’t really have much of an impact on how you play, and the rewards they present are either negligible, or, at times, flat-out nonexistent.

Spelunky 2’s progression is another area where I feel it would have benefited from growing with the times. Once again, the sequel mostly sticks to the rulebook written by its predecessor- as you descend through its procedurally generated levels, you collect more treasures, and unlock more items and weapons, but every time you die, your progress resets. Such is the way any roguelike game operates, but Spelunky 2 can feel a bit too punishing at times, especially since having to play through similar areas again and again without any of the upgrades you’ve unlocked can open the door for the feeling of repetition to creep on.

You do have the ability to unlock shortcuts, of course, but that’s no cakewalk either. All in all, Spelunky 2 can occasionally end up feeling a bit too unforgiving, and while that’s not exactly a new feeling in a Spelunky game, it’s a little disappointing that the sequel sticks to its guns so closely rather than trying some new things and potentially introducing improvements to an already solid formula.

"Spelunky 2’s progression is another area where I feel it would have benefited from growing with the times."

But of course, for many fans of the original, more of that already solid formula is exactly what this sequel needed to be. Part of the reason for the original Spelunky’s appeal was its purity of concept and execution, almost like a game distilled to its purest form – and that’s all true here as well, perhaps even more so, thanks to some smart iterative improvements and additions to the formula. If you loved the original, you’re going to love Spelunky 2, and find it equal to its predecessor in all ways except one- where the original was a trail blazer, the new game seems content to, much like it asks of its players, simply plumb into familiar depths.

Retains the addictive nature of its predecessor; Demands careful, tactical play; Tight platforming; So much more to explore and discover; Most of the new additions work out very well.

Feels too familiar; Progression can be too unforgiving; Hidden rooms feel largely meaningless.

Final Verdict:
GREAT
If you loved the original, you’re going to love Spelunky 2, and find it equal to its predecessor in all ways except one- where the original was a trail blazer, the new game seems content to, much like it asks of its players, simply plumb into familiar depths.
A copy of this game was provided by Developer/Publisher/Distributor/PR Agency for review purposes. Click here to know more about our Reviews Policy.