The Web Slinger is back once again! This time with a futuristic ally. Spiderman Edge of Time offers a brand new story to the Spidey saga. A villain from the year 2099 has gone back in time to present day New York City and changed the timeline and kills the original Spiderman. But all hope is not lost as the Spiderman of 2099, Miguel O’Hara, works with Peter Parker to stop his untimely death and reverse the changes to the timeline. 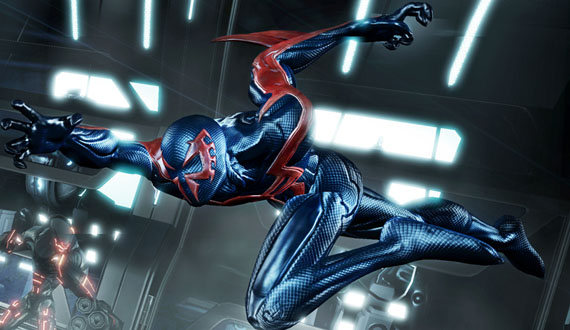 The cinematics of the game are actually quite impressive as well as action packed. Unfortunately the enemies few and far in between, meaning you won’t have much of a variety of them, even the techniques to kill them can become repetitive.  Speaking of repetition you will find yourself doing to same things over and over again that just seems to make the action more dull as well as take away any real thinking when it comes to getting through areas.

Levels switch between the two different times and Spideys. Both characters have their own specialized moves as well as shared ones that can be leveled up. The classic Spidey has the usual web-slinging moves and punches as well as a new time warp power. The 2099 Spidey is also capable of a time ability as well as being able to create a decoy of himself to fool enemies.  Each character offers deadly ways of ranking up the combat multiplier. 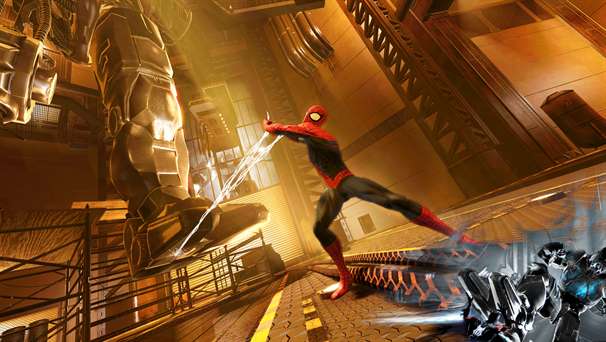 You’re given the ability to stop things from happening in the future and past.

The whole time period plot, you cannot help to feel that it is not quite flawless.  What you do in one time period, directly effect the other and you will switch back and forth between playing as each spider-man in the different time periods.  This can be fun, especially seeing some of results but like I mentioned, it just seems far from flawless.  Most of the time you will just being playing a linear Spidey game where you will be button mashing and seeing repetition over and over.  It is not that bad a game but it is certainly not something I would suggest you run out and purchase.

Spiderman Edge of Time specifically features the classic combos of past Spidey games, with punches, kicks, and aerial smack downs. Characters each have their own chargeable attacks. Parker can charge up a web hammer and O’ Hara can charge up a whirlwind kick. Both characters have access to a time paradox move, which freezes enemies. Despite being inside buildings, web swinging around areas is available, as well as web-zips (automatic travel to ledges) in specific places for quick travel.

Overall the game runs very smoothly, with the only possible control issues coming from wall crawling, which in a rush can be slightly confusing. Otherwise, the various moves and excellent cinema scene graphics offer a fun time. Some players may, however, be disappointed in the fact that it’s a linear game, as opposed to previous Spiderman games that were free-roam.

The new storyline and even the fact that it is linear help make it more original and less like playing just another Spiderman game. In campaign challenges help add a little spice to the game as well. There are also some pretty cool looking Spiderman suits that can make the gamer feel like a more bad ass Spidey.

Spiderman Edge of Time is a linear game and can get repetitive at times. This can make it boring at times.

Final Verdict:
FAIR
Spiderman Edge of Time might not be considered the best of it’s series, however gamers should feel an overall sense of enjoyment over the usual bounce-around combat and web-swinging, as well as an interesting storyline. After all, who doesn’t love a story with time traveling?
A copy of this game was provided by Developer/Publisher/Distributor/PR Agency for review purposes. Click here to know more about our Reviews Policy.