Imagine that you’re a Spider-Man fan, and a gamer. You know better than anyone else that out of all the superhero licenses, Spider-Man and video games go together like cookies and milk. You’ve grabbed every reasonable Spider-Man game that you can, because they’ve never let you down before. Spider-Man VS The Kingpin, Spider-Man for the PS1/N64, Spider-Man 2 – all offering new and exciting things and keeping you coming back for more. But then something happens. You start to realize that there’s a decline in the quality of the games that come out. Spider-Man 3 comes out, and falls short on it’s promises. Then the dire, unforgivable Spider-Man: Friend Or Foe is released – nothing better than mindless kiddy-fodder. Even worse than that, it’s a terrible game. Then Spider-Man: Web Of Shadows comes out. It’s slightly better than the previous two, but just not enough for you to get your Spider-fix.

Suddenly the thought occurs to you that maybe Spider-Man games are only going to get worse. Maybe they’re only going further downhill. Is this true? Is the once mighty and highly entertaining franchise in gaming finally throwing in the towel with quality, like Sonic The Hedgehog has? Then, Spider-Man: Shattered Dimensions is announced, to the skepticism of many fans. As things progress further and further, it’s unveiled that the game doesn’t bring back the free roaming environment and realistic web swinging mechanics that made Spider-Man 2 so great – it’s back to linear levels and swinging through thin air for you, buddy. You think, “What the hell?!? They removed the only good parts of the last games!!!” But does this ruin things, or not?

Like any good game should, Shattered Dimensions (developed by Beenox/Griptonite Games & published by Activision) makes sure that it’s fun to play. Truth be told this is probably the strongest part of the game, but that’s not a bad thing. Some people may view it as mindlessly simple or too straightforward, but Shattered Dimensions makes it work. You’re basically progressing through levels fighting waves of enemies the same way you would playing X-Men Origins: Wolverine or Ghost Rider. There’s occasionally a puzzle, an obstacle course, or civilians needing rescuing, but aside from that there’s little else. The exception to this, is the Noir Dimension – which is primarily based on stealth. 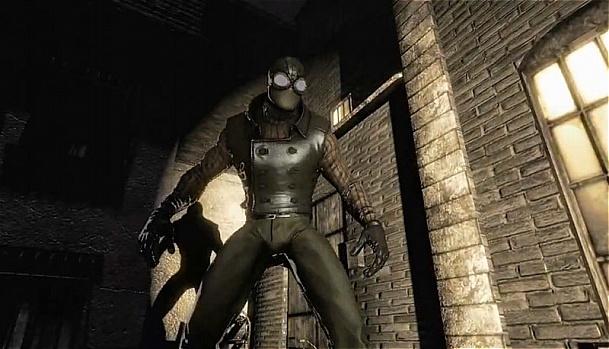 Basically this game puts you in the shoes of four different versions of Spider-Man. They all feel unique while sharing the same basic Spider-Man abilities. Each has their own special perks that the others can’t duplicate and their own strengths and weaknesses. The default Amazing Spider-Man that we’re all so used to would be the bare bones template for the others, but to keep him from feeling like “Spider-Man Beta” in comparison Beenox have used his many years of superhero experience (compared to the others) to give him the use of his webbing in combat. Along with highly acrobatic maneuvers, Amazing Spider-Man will use his webbing to tear apart the environment and smack foes silly with it, and even create weapons out of his webbing.

Noir Spider-Man, as previously mentioned, is more focused on stealth. His incarnation isn’t nearly as durable as the others, so he is vulnerable to being mowed down by gunfire much more easily. He haunts his levels like a phantom, picking off foes one by one in the dark with brutal takedowns. Beenox have said, “[they] tried to make this portion of the game feel a little bit like Frank Miller’s Sin City”. I found the use of a newer, well-received incarnation of Spider-Man refreshing, and the effort Beenox have put into the game really shows. This was my favorite part of the game.

Spider-Man 2099 is focused on speed: he has quick, savage attacks using close combat claws; his accelerated vision (a technological spider-sense that appears to slow down time around him), and the free-fall gameplay mechanism where he controls his own speed in order to manoeuvre around obstacles and chase down the bad guy. Unfortunately 2099’s segments seem to be the least entertaining parts of the game, but that doesn’t mean they’re not worth playing.

Ultimate Spider-Man brings back the fan-favorite black suit, and all the powers that come with it. The black suit acts as an extension of Ultimate’s own body, forming lashing tendrils and striking out at enemies from a distance, with some great crowd-control attacks (especially when used in Rage Mode) which will wipe the floor with waves of foes in seconds and make you feel tremendously powerful.

What I found interesting is that the game goes out of its way to take the player out of familiar areas that gamers have gotten so used to in the past 4 or 5 Spider-Man games. Noir and 2099 are strictly set in New York, but are vastly different from the version fans may be accustomed to. This is due to the time periods’ effect on the famous city. Amazing and Ultimate opt for more exotic locations, including a jungle, a desert, and a construction yard, to a power plant, a reality TV show gauntlet, and a parasite-infested S.H.I.E.L.D. base, respectively. The game possesses 13 levels (14 if you count the tutorial). This may sound short, but each level is extensive, and gives you room to explore to beat more challenges and help you  progress further. Each Spider-Man has 3 of their own levels, which are all set in their own reality. You are given a tutorial in the beginning to get you somewhat accustomed to each Spider-Man’s unique abilities, and then dropped into Amazing Spider-Man’s first level. Following that, you progress through three arcs. In each arc, you can complete one of every Spider-Man’s level in the order that you choose (with the exception of the first level, which isn’t even a big deal, really). This is a real refreshing change from being forced to jump between Spider-Man and Venom during parts of the game like Ultimate Spider-Man.

As much as I thought i’d miss free-roam and linear swinging, this game does okay. The swinging is a little bit different this time around, hearkening to a slightly more complicated version of the “swinging in thin air” last seen in Spider-Man (2002) for the GC/PS2/Xbox, but it doesn’t take long to get used to. Crawling is something else that takes some time getting used to, but isn’t too bad either. While the swinging and crawling may feel weird for some, it surprisingly doesn’t take away from the game too much. A feature completely new to Spider-Man games in this installment is a sequence during most of the boss battles that allows you to exchange fisticuffs with the villain in first person. I personally found this really enjoyable; it added a new thrilling element to the already well done boss fights and allowed you to better vent your loathing for the boss. The boss fights are probably the strongest part of the gameplay as a whole, and the lineup of villains is sure not to disappoint.

Sadly, the story fails to deliver in this game. Okay, I’ll be fair: superhero games in general are known for having plots as engaging as their comic book counterparts, but I really think they could have done a little better if they tried hard. It starts off with Amazing Spider-Man fighting Mysterio in a museum, where he accidentally shatters the Tablet of Order and Chaos: a mystical tablet that holds the threads of reality together. The fragments scatter across the dimensions, and the villains who find them gain more power just by holding it. Madame Web contacts each Spider-Man to explain the predicament, and they set off to get the fragments back and restore the tablet. That’s pretty much it. I was excited to see what the story for this game was going to do, since it’s the first time the whole alternate reality scenario so notoriously present in Marvel comics was toyed with in video game media, but it was pretty bland. I was hoping that they would at least show the four Spider-Men interacting with each other more often, but we barely see this at all. That would have made for some interesting conversations. Then again, this could have been difficult to execute, because many casual fans are unfamiliar with the alternate comics. To be fair to Beenox, they do make efforts to get you attached to the individual Spider-Men, with continuous character-driven story-lines for Noir and 2099; whereas Amazing and Ultimate’s stories are more sporadic and focusing solely on finding the tablet fragments.

One thing I did think was  cool is that the developers collaborated with Marvel to create new incarnations of Spidey ‘sopponents that have never previously appeared in certain continuities. Some of the earliest you see are Noir Hammerhead and 2099 Hobgoblin. While the game is mostly Spidey-centered, we do get some nice boss cameos from Juggernaut and Deadpool of Weapon-X fame. Seriously, who doesn’t love Deadpool? 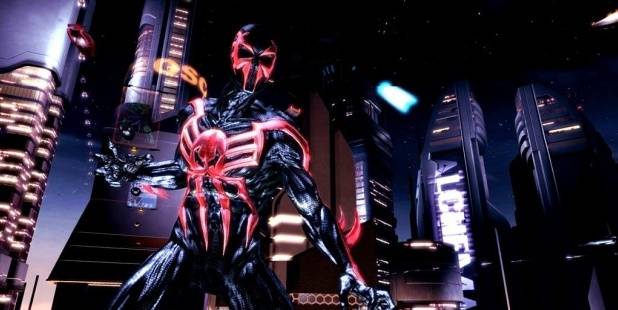 Beenox went out of their way to put together four different teams for each Spider-Man’s dimension, giving each a completely unique graphics style. No universe looks the same. Noir melts between monochrome and dull colors, establishing a gritty tone and mood; whereas 2099 pulses with life, illuminated by endless neon. Amazing hearkens back to the art style found in older Spidey comics; whereas Ultimate Spider-Man mixes the distinct detail in Alex Ross’s work with the bold lines of manga.

The voice acting in Spider-Man: Shattered Dimensions really shines. Actors from recent adaptations going back to the 80’s have been brought in to reprise their roles as Spider-Man in his four incarnations, and other voices from the various tv shows have returned too. As for our hero(es), Neil Patrick Harris from MTV’s Spider-Man (~2000) returns to don the red and blues once again. In my opinion, he is good enough to be passable, but doesn’t give the best performance in the game. Christopher Daniel Barnes from the 90’s Spider-Man: The Animated Series returns to play Spider-Man Noir, letting his aging since the show add to the bitterness of his character, and it’s really awesome. He truly sounds menacing and jaded, but still like Spider-Man. Dan Gizelvan, from the 80’s Spider-Man and his Amazing Friends, plays Spider-Man 2099. Harsh as it sounds, he gave probably the weakest performance in the game, but I respect the man for giving Spider-Man another shot after 30 years. Josh Keaton, from the only recently canceled Spectacular Spider-Man (best Spider-Man show ever – go check it out!) returns to play the teenage Ultimate Spider-Man. I think he has the best voice in the game, and the funniest lines; I never get tired of hearing him.

There is plenty of other awesome voice acting too; Jim Cummings (VA veteran), John DiMaggio (returning as Hammerhead from “Spectacular Spider-Man”), and Nolan North (returning as Deadpool from Hulk VS) just to name a few. The music is orchestral and dramatic, and the sound effects are fitting for the game. All around pretty decent, and tremendous fanservice in this department among other things. This game is not very long. It took me around 6-8 hours to beat, and that’s only because I sped through all the levels as fast as I could without doing much of the extra stuff. The challenges offer extended gameplay, and there’s some cool stuff to unlock – most of all the alternate costumes. They are really sweet this time around. All the levels are good enough to want to experience multiple times but can sometimes be confusing.

If you’re a Spider-Man fan, buy. This is the best Spider-Man game to come out in a long time, and as I said it’s worth full price. Other people may want to try it first to see if it’s their cup of tea – this game is made for serious Spider-Man fans, not casual gamers, and might turn them off. But I still really enjoyed it and found it a lot of fun.