Spirit of the North Review – What Does The Fox Say?

Spirit of the North is a fantastic example of a gorgeous experience that struggles to maintain its momentum throughout. Its presentation is stunning in almost every environment it presents, and its gameplay provides a usually mellow way of exploring companionship and deciphering a fallen civilization. However, it fails to maintain its strengths as its gets to the late stages of the game, losing focus on what makes it special. While its general puzzle gameplay is passable, its real strengths lie in the peace and beauty of its presentation and explorative gameplay, making the latter chapters inconsistent and disappointing.

From the beginning, Spirit of the North is a walking simulator in its truest form. You guide the fox you control along paths with very little to do except admire the environments and attempt to piece together what you think has happened to the fallen civilization you’re exploring. It takes very clear inspiration from the likes of Journey and Rime in its presentation and gameplay. With no dialogue and very little text, you are given vague direction and minimal explanation as to what you are meant to be doing throughout the game, and your only course of action is to follow the guide that leads you and assists you along the way. 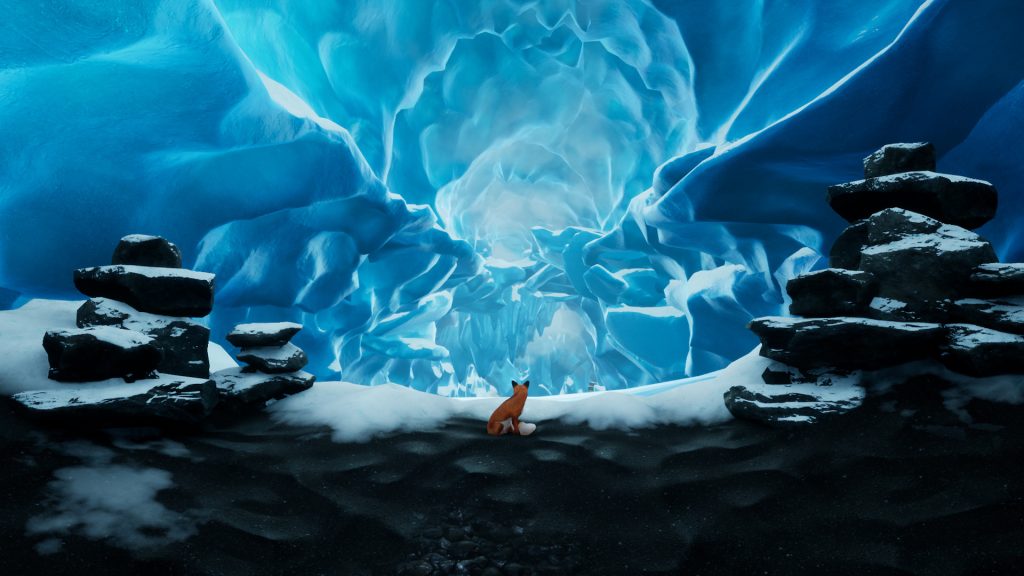 "The first few chapters of the game flaunt the game’s strengths, which are contained entirely in its presentation."

Spicing up the walking simulator aspects of the gameplay, though, are objects throughout the world with which you have to interact to affect parts of the environment that will allow you to proceed. Usually, this happens by collecting Spirit Blooms, patches of blue flowers that give you a special glow and allow your companion spirit to have these contextual interactions with the environment, primarily with decaying tablets that can be lit. In doing this, you have a few options for your spirits actions. These are hardly puzzles in the early going, as they appear more like fetch quests to bring the Spirit Blooms to the desired locations than anything that requires much thought, and the actions to do what you need are relatively constant, with very little in the way of difficulty in wondering what you have to do. This is emphasized especially because every time you come up to an object at any point in the game, regardless of how many abilities you have, the correct contextual button prompt pops up, which made it less of an activity in discovering where I should be acting than an activity in wandering and hoping a button prompt would appear.

In doing all of these puzzles, the game’s narrative starts to take a bit of a back seat. As it tells you exceptionally little, it takes effort to begin to have an understanding of what is really going on in this civilization and with your spirit companion. As you get to the latter stages of the game, there are more murals and hints as to what happened in the past that give more of an idea of the context of the world. There are also numerous Shaman Masters scattered throughout the world, whose staffs lay elsewhere in an environment. Reconnecting a Shaman Master acts as the game’s only real collectible within the game, though it is a valuable addition to the civilization’s past. Overall, though, the story is obtuse enough that it’s easy to overlook it as you complete the rest of the game, but on a second playthrough, it gets more interesting and begins to clear up what really happened to this world.

The first few chapters of the game flaunt the game’s strengths, which are contained entirely in its presentation. Walking around the varying environments is consistently stunning, especially as they change from one season or color to another. In these chapters, it’s a relaxing experience that lets you reflect on the world and companionship you experience. When seen from afar, the environments are gorgeous, especially under the red sky or under feet of snow. Up close, though, the environments can be rougher around the edges. It’s easy to see the specific texture edges, and some animations seem pretty framey. However, the game’s music is arguably its strongest aspect, rounding out the beautiful environments with an emotional and resonating score that rivals scores of others masterpieces in the genre. It does an incredible job of amplifying the emotional aspects of the game and making seemingly minor moments touching and memorable. 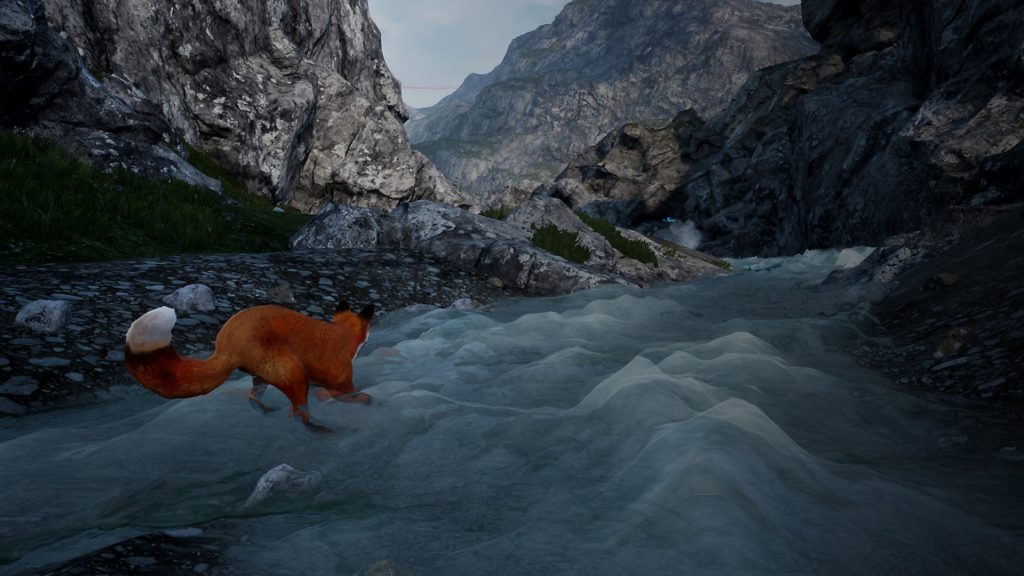 "With the peace and beauty of its environments as the game’s greatest aspect, then, the final chapters become somewhat of a letdown because they lose focus from what makes the game stand out."

Technically, the game runs generally well, with only an occasional hitch in the framerate. The more frustrating element is the hitboxes of the platforms and of your fox. It’s never entirely clear as to where you will land and whether or not that location will register as the platform on which it appears, making me fall through a platform or stand on air. Numerous times I had to restart late-game puzzles because I fell off a platform or missed a jump that was affected by a misplaced hitbox. It’s frustrating to see this because it took away from the game’s beauty, as I began to focus more on the specific corners of a platform than on the environment, civilization, or companionship the game is presenting.

With the peace and beauty of its environments as the game’s greatest aspect, then, the final chapters become somewhat of a letdown because they lose focus from what makes the game stand out. As you hit the more open areas, you’ll be faced with more intricate and thoughtful puzzles that do more to test your abilities, especially ones you gain later in the game. These can get pretty frustrating because of the imprecision of the hitboxes and the lack of explanations of not only what you need to do, but also what your abilities themselves can do. With this, you’ll begin to focus more on finding a way to create your path forward than on what actually lies ahead.

Though these puzzles are more of a way for the game to test you on your abilities, they feel forced into the game to make the ending more difficult, as opposed to anything that enhance the narrative. In the early stages of the game, it seems to understand that the civilization you’re exploring and the narrative and environments it’s presenting are the most important aspects, but these take away from that, especially in one chapter that takes place almost entirely within a cave. It’s a large missed opportunity that feels like the game felt like it had to shoehorn in more generic difficult puzzles than rely on its strengths and create a consistent experience that the first chapters hint at. 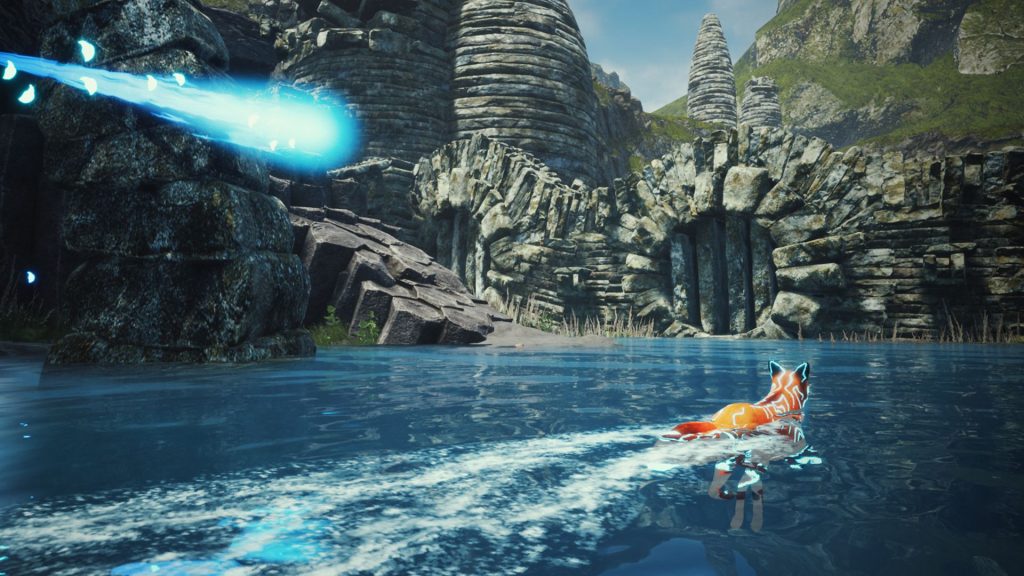 "While Spirit of the North is a fantastic case of a beautiful experience, its late inconsistencies hurt its complete package."

Spirit of the North contains an incredibly relaxing, beautiful, and mellow experience that gives you the ability to interpret its themes in your own ways. I loved the experiences in which I could walk around and explore the environments to try to piece together what happened to this civilization and who my spirit companion was, especially when backdropped by the achingly beautiful score that complements it. However, the last few chapters lose what makes the rest of it great because they choose to focus on the less satisfying, more generic puzzles, instead of the fantastic open exploration and discovery gameplay. While Spirit of the North is a fantastic case of a beautiful experience, its late inconsistencies hurt its complete package.

Final Verdict:
GOOD
Spirit of the North is a beautiful experience with a gorgeous score, beautiful environments, and peaceful gameplay, but its late inconsistencies make it a missed opportunity for a complete package.
A copy of this game was provided by Developer/Publisher/Distributor/PR Agency for review purposes. Click here to know more about our Reviews Policy.