Posted By Shubhankar Parijat | On 22nd, Sep. 2011 Under Feature, Slider 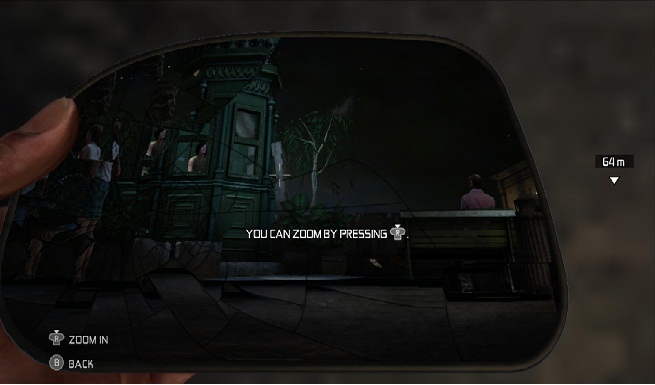 The legendary... wing mirror stolen from a car.

I kind of liked how Sam Fisher was improvising in Conviction much more than he did before, using the gadgets that he he could get his hands on, and turning everyday, common items into actually useful items for stealth, but I’d really like to see some crazy new tech, some complex gadgets in Splinter Cell 6. Most of all, I want the Multi Vision Goggles to return in all their glory.

I don’t like how restricted Splinter Cell: Conviction can feel sometimes. You’re given an objective, and most of the times, there’s only one or two ways to go about getting your work done. I’d like to see some more gameplay variety, some more open-ended gameplay in Splinter Cell 6. I don’t want the devs to go entirely crazy and give us a Deus Ex, because Splinter Cell has its own identity, after all, but a little more open ended nature would be welcome.

Sam Fisher is an awesome character, young or old, but to play as the Sam Fisher in the prime of his youth, with all his physical strengths would be great. As I mentioned above, Splinter Cell 6 could be a prequel game, maybe, and that would obviously mean having a young Sam Fisher. I don’t really know how Ubisoft can fit it all together properly, but playing as the good old (or young, in this case) Sam Fisher again would make Splinter Cell 6 much better than it’d be otherwise.

Many of you might have like that Splinter Cell: Conviction told a much more personal story than other Splinter Cell games, and I frankly did think the story was a bit interesting and emotionally touching, but it just wasn’t Splinter Cell. We want to see Splinter Cell 6 move away from the personal approach, and have an epic, all encompassing story once again, returning the franchise to its glory days. Maybe another war? Maybe civil strife? Maybe problems within Third Echelon? Anything, just make sure it retains the Splinter Cell spirit.

Give us your feedback and tell us what you want to see in Splinter Cell 6 via your comments below.