StarDrone was just a little flash game not so long ago and has turned into much more since then.  You see the mechanics a actually quite simple, but it how you use the that makes the game as complex as it is innovative.  The game apparently had 3D capabilities as well as taking advantage of the Playstation Move being released exclusively for the Playstation 3 when it comes to next gen consoles.  There are other versions of the game that have been or might be released for the iPhone, iPad, PC, Mac and Wii all co-developed by Beatshapers/TastyPlay. 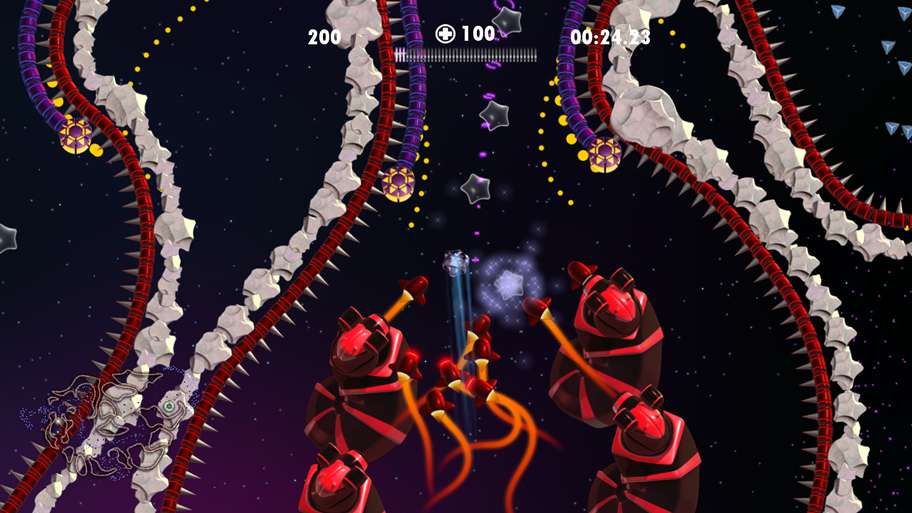 StarDrone – Your Drone being chased by enemies.

I played the Playstation 3 version of the game with the Playstation Move.  I steered my drone through the star filled galaxy collecting “Equilibrix” to stop the “G-Noids” from taking over the universe. This is completely irrelevant as there is not a word of text, a cut scene or a hint of any of this in the actual game. This is not necessarily a bad thing, it is just much more of a simple arcade game than that. It is kind of like a combination between Geometry Wars and Pinball, in fact I think that is a perfect way to describe it. The game itself is very innovative and even more so when you use the PS move with it. You start a level by shooting a drone out in your desired direction and must collect as many if not all the stars or pieces of “Equilibrix” as you control the drone in a very unique way. While it is soaring through the sky you hold down lets say the ‘move button’ and are then shown a couple of dotted directions you drone will head in upon releasing the move button. Once you get the hang of it you will have your drone soaring in the direction you want while using anchors to swing around and pull off any desired degree of a turn from zero to a 360.

There are 50 levels of star soaring flight as the more objects that are collected the faster you go.  During the levels you will want to be in constant motion.  If you gain enough speed you enter a ‘Comet Rush’ and you are invincible for as long as you can keep the speed of or the collecting rather.  In the first few levels there is no real danger, the game just getting you used to the controls, but things change quickly.  The dangers become a big part of the game and are everywhere around you with some levels leaving you with only one perfect flow of your drone.  This I feel is the downside of the game.  As you progress you become entrapped in spiked areas where one degree off when turning will kill you.  Other may thrive on this and love the thrill of perfection.  I however feel that I am not alone as where the frustration of not making that perfect run turns me away from the game.  As good as it feels to complete a very difficult level, trying to complete the same one for so long just seems like a waste of time and reminds me that I am playing an arcade game that was original just a flash game.

I can’t let that frustration get in the way of the fact though of how innovative and amazing the game must look in 3D, which I did not have the luxury of seeing.  This type of game is one those game that will open the door for more creative ideas.  StarDrone will let loose and pave the way for many games to come using PS Move, 3D capabilities for arcade games as well as retail games.  You can view the video included in the review to see what it is like.  The game may not be for you, or it may be just for you, or it might just be what you need to see for you yourself to create something new yourself from the innovation that comes from StarDrone.

StarDrone costs $7.99 and $4.99 for Playstation Plus Users.  It will also be heavily promoted for the iPad as well.  Here is the Official StarDrone site.

Gets difficult. Can become boring after so long.

Final Verdict:
FAIR
Innovative arcade game that is a 3D and Playstation Move compatible game that sets the pace for games to come.
A copy of this game was provided by Developer/Publisher/Distributor/PR Agency for review purposes. Click here to know more about our Reviews Policy.