Posted By Kartik Mudgal | On 19th, May. 2012 Under Reviews | Follow This Author @KartikMdgl

Warhawk’s legacy is a little intriguing; a game released when PS3 was going through birth pangs with an underdeveloped online service, resulted in the game getting overlooked by many, but still managed to develop a cult following. Its sequel, Starhawk, isn’t a true successor, or so to speak, but does enough to show you that it contains the DNA of the original game. 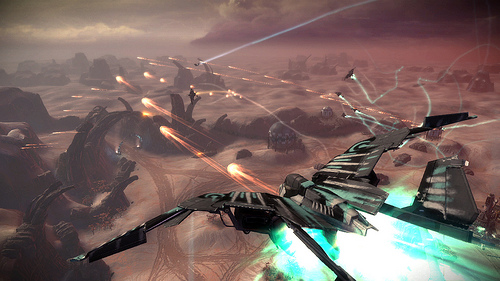 So, then, what makes Starhawk so interesting that people should shell out money to buy it? Having played the recent beta, it left me in two minds: what exactly is Lightbox trying to accomplish with this game? Are they trying to make it accessible to attract a new audience, or stay true to the original game and develop it for Warhawk fans? It seems like they couldn’t accomplish both, even though their vision can be noticed easily.

I asked my friend what he thought of the Starhawk beta, and being an avid fan of the first game, his indifferent attitude towards the beta was certainly understandable. It may look like I’m trying to be negative from the start, but I really am not. Starhawk’s multiplayer is loads of fun when played with friends and it’s undoubtedly the main reason why anyone should be interested in this game. The single-player, however, is simply forgettable.

You play as Emmett Graves, a guy who has not been completely transformed by the Rift Energy which flows through the land. But the enemies – called Outcasts – have been converted, and Graves has to use his power to vanquish them all. The story is not really something that will fill you with curiosity and keep you interested till the end. You do get access to the cool vehicles and weapons of Starhawk, and it is recommended that you do play the story mode to get a feel of these things, which will help you compete well in the multiplayer mode. 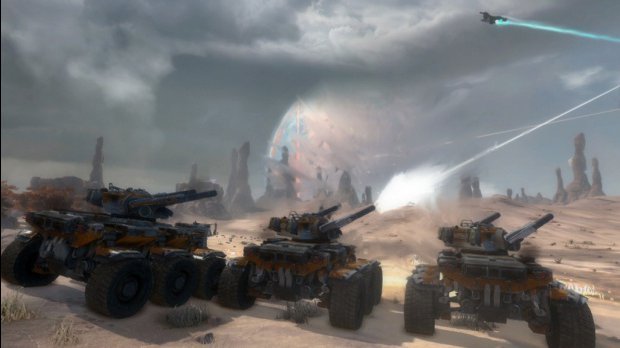 Random objectives run riot in the campaign, and it feels like they have mixed up a bunch of things without any coherency. Warhawk didn’t have any campaign mode, and while the fans requested Lightbox to add one here, I kind of think they should have just concentrated on the multiplayer. You can only play the campaign for so long until you are bored due to the repetitiveness. The comic-styled cutscenes don’t help in providing a significant story background to the player either.

It has to be noted that the game features a 2 player offline co-op and a 4 player online co-op function and playing with friends can propel something decent into quite fun. Same case with Starhawk; instead of going solo, it is recommended that the campaign be played with friends.

As the name of the game suggests, Starhawk allows you to control vehicles that can transform into a hawk with a quick press of the circle button – and the hawk is loaded with all kinds of bells and whistles. It’s a joy to fly in space with this thing, and there are a lot of maps available which are nicely designed and varied. Maneuverability is quite good as well provided you know what you’re doing. It’s okay if you hit objects, I did too. But that doesn’t make you a bad pilot, oh no! Your kill count determines that. So you can do a hawk suicide move if you notice a bunch of dudes from the opposing team. 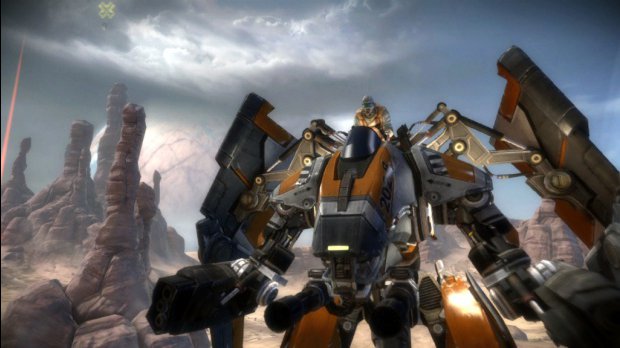 Lightbox have weaved together TPS and RTS mechanics in this game for the first time I’ve ever seen, and this implementation forms a core part of the multiplayer too. If you play the single-player mode first, the game will ease you into this mechanic quite swiftly and early. You can build Bunkers or a tower to snipe just anywhere except the enemy base in the map. This freedom gives you great power and makes the gameplay a bit tactical. You also need to gain Rift Energy to build new structures. They can be had by killing enemies or destroying barrels which contain them.

When you play online, it’s quite imperative to be placed in a good team, or the chance of you getting destroyed fast are quite high. You can’t really determine who’s good and who’s not, unless you play a lot and get killed by the same guy again and again. Totally didn’t happen to me, though. Stop looking at me. The server browser allows you to choose the type of game you want, and you can jump in quite effortlessly. There are quite a lot of gametypes available: capture the flag, team death match and the likes. You know – just like in 99% of the multiplayer games out there.

Aside from the pretty cool spawn method where you drop from the skies, unless you have a vehicle nearby, be prepared to make a long trek to the enemy base only to get killed and repeat it again. This has been my no. 1 issue when playing online, although, I’ll admit that I really need to have a little patience. You can, for example, build defensive structures to shoot down those pesky hawks from the skies, or just capture a point close to the enemy base. 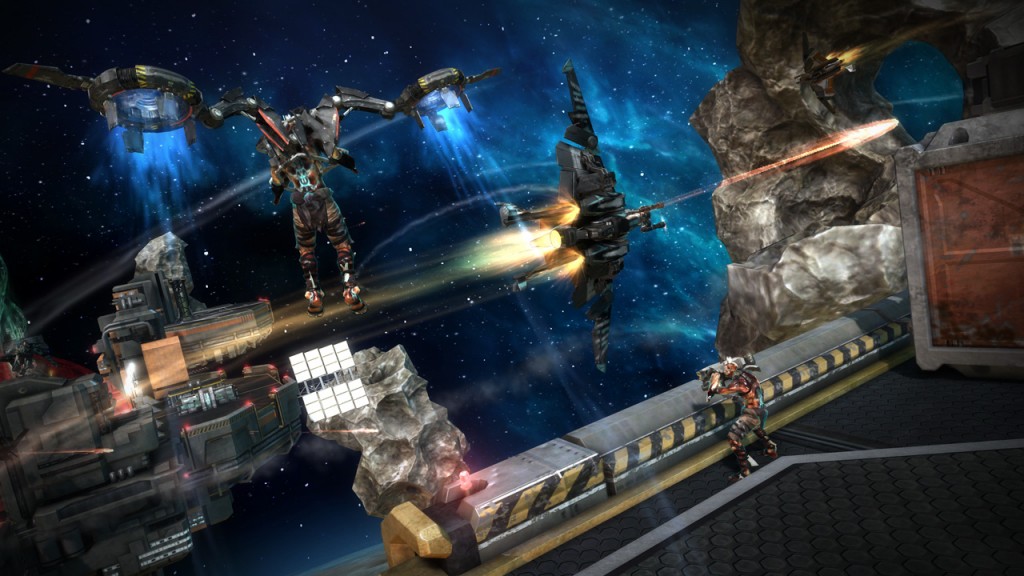 The netcode is pretty good and rarely did I face any lag or any issues like that. Playing with friends and co-ordinating with them can be a really satisfying thing to do in the game. There are also jetpacks available to you, with which you can find fancy ways to kill your opponents. Unlike Warhawk, the difficulty curve is quite manageable, and if you are a new comer, you will end up dazed and confused if you jump into the multiplayer directly. This is what I meant earlier when I said they tried to make the game accessible, but still didn’t execute that well.

There’s fun to be had here, though. The visuals and production values are quite high, and that’s something you’d expect considering it’s published by Sony. The game needs a solid audience playing it online for a long time for it to really shine. Of course, this could be said about any game, but in Starhawk, it’s mostly all about teamwork and strategies, so people looking for a solo experience will find what they want, but not to a level they would expect.

Second opinion by our author Bojeeva.

As soon as you boot up Starhawk – the spiritual successor to sleeper hit Warhawk, you can’t help but feel this is a quality product. It all feels very similar to last year’s RAGE, in the sense that it’s another space western that looks the business graphically and sounds superb. Besides the crisp and vivid visuals, Starhawk’s developers LightBox Interactive have roped in award-winning composer Christopher Lennertz for the score, helping on the presentation front.

Set sometime in the future, it tells the tale of mankind’s struggle over a powerful resource known as Rift Energy. Colonies of humans scour the galaxies for supplies of the stuff but face a constant threat from some badass mutants called the Outcast – it’s reminiscent of the Gold rush in the Old West and all the gunfights that ensued. You fill the shoes of the part-mutant Emmett Graves, who is shunned by society after being exposed to a little too much Rift Energy and developing a worrying glow about him. As a hired gun, Graves roams the galaxy to support prospectors and fend off any attacks.

The woefully short single player campaign can be also be played in co-op but it’s quickly completed. It’s fun while it lasts though, the frenetic action introducing you to the controls and unique Build & Battle mechanic. As mentioned before, Starhawk looks fantastic and there’s loads going on at any time onscreen.

I must admit I quite liked the cartoony-cutscenes that punctuate the missions and progress the story. Granted they clash a little with the lovely aesthetics in the actual game but I didn’t mind them one bit.

Although the backstory is nothing to write home about and the missions aren’t particularly inspiring, clearly Starhawk’s unique selling point is the ability to summon unfathomably large structures from the heavens, instantly altering the game and giving you a tactical advantage. It really instils the sense that no two games are ever the same.

It’s not always that simple, however, because you’ll be stuck without a decent supply of Rift Energy – the currency for these fortifications. Fortunately this is sourced from supply towers dotted around the place or by dispatching bad guys. Pull up the selection wheel and there’s loads on offer, from substantial defensive walls, bunkers and watchtowers to useful bits of technology such as bikes, jetpacks and those titular Hawk flying machines. Sure, it all feels a little clumsy at first, but it soon becomes second nature.

It works really well in practise; a massive drop ship hovering somewhere in the stratosphere  depositing the wide selection of structures and supplies onto the battlefield within seconds. It’s a huge strategic advantage and a few well-placed button presses can dramatically change a skirmish, transforming a hopeless situation into a positive one. What general wouldn’t want the option of constructing huge defences instantly? It brings an element of tactics and skill to an otherwise conventional third person shooter. Think Command & Conquer meets Red Faction Guerrilla! Oh, and crushing enemies when your building plunges from the sky is hugely satisfying.

Granted the campaign is brief and acts as little more than a comprehensive tutorial to the skirmishes you’ll face online but it’s fun nonetheless. It does get a little repetitive, but what solo campaign doesn’t nowadays?

Ultimately though, it’s the multiplayer modes that will really justify a purchase. Transferring the skills you’ve learnt playing alone to a theatre of war with up to 32 players is intense! The usual game types are on offer, such as Deathmath, Capture The Flag and the like. Online, it’s a shooter like no other and really encourages teamwork to survive. Add the factor that it’s an ever-evolving battlefield because of your trusty drop ship in the sky and you’ll no doubt relish the fast-paced destruction.

This is yet another fantastic PS3 exclusive and I’ve no doubt it will remain a great game as long as the online community supports it and those lobbies stay full. You can almost forgive the short campaign – but for those planning to play without an online pass and having no intention of getting one, Starhawk is perhaps only worth a rental.

Great production values. The visuals look great. The multiplayer has a lot of depth. Bunch of online and offline co-op modes. Fantastic netcode.

The campaign is lacking and only serves as a tutorial. Baffling design choices. High learning curve in the mutliplayer.

In Starhawk, it's mostly all about teamwork and strategies, so people looking for a solo experience will find what they want, but not to a level they would expect.

A copy of this game was provided by developer/publisher for review purposes. Click here to know more about our Reviews Policy.
Tagged With: lightbox interactive, ps3, sony, Starhawk