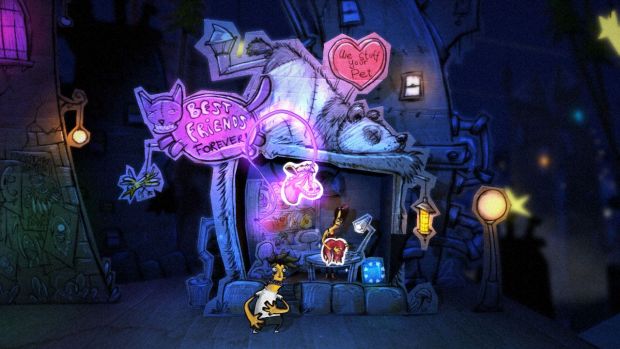 Indie adventure game Stick It To The Man (yes, that is what it is called), will be launching on the Wii U and PlayStation 4 on April 30, the game’s publisher in the UK, Ripstone, have confirmed. Internationally, the Wii U version launches May 1, with the PS4 version following on April 6.

The game launched last November on PS3, PS Vita, and PC, and lets players take control of Roy Doewood, who has the ability to read people’s minds. In Ripstone’s own words, “Digging in the brains of his fellow citizens – including the likes of Santa Claus, a Pregnant General and Elvis (to name but a few); it’s up to Ray to gather clues from countless insane characters and solve mind-boggling puzzles – all while trying to escape the evil clutches of The Man!”

The Wii U version actually seems to be taking advantage of the console’s unique functionality for once, with the second screen being used to display the ‘mind reading world’ separately from the physical world; the PS4 version gets thoughts read out loud over the controller’s speaker.

No Xbox One version of the game is announced yet.

Tagged With: ps4, Ripstone, Stick it to the man, wii u