The arena shooter has had a rough go of it lately, and that’s putting it kindly. It would be more accurate to say that the genre has been in a coma since the heyday of Quake, Counter-Strike, Tribes, and Unreal. Halo carried the torch for a while on consoles, but those days are long gone, especially in the post-Bungie era. Sure, Counter-Strike has remained immensely popular, and we occasionally get throwback titles like Tribes: Ascend, but the genre has been dying for years, even on the erstwhile PC. Short of the old-school favorites and free games like Quake Live, you’re out of luck.

Things are even worse on consoles. Can you remember the last time you played a multiplayer shooter on a console that didn’t have create-a-class, or didn’t cast you as a member of the U.S. military or the Russians/Chinese/terrorists/generic anti-American baddies? I certainly can’t, Bungie’s Halo titles aside. 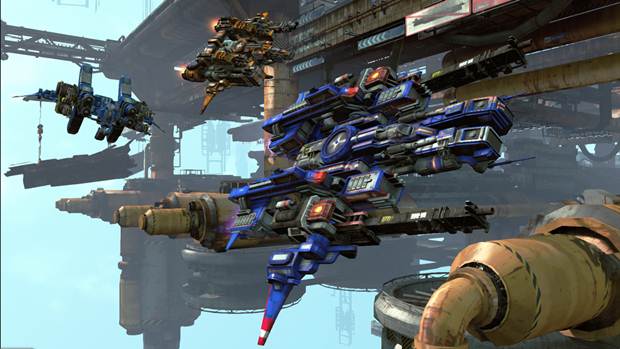 "In all likelihood, you’ll spend your first few games racking up deaths while you try to learn the ins and outs of the game’s movement, but once you do, the possibilities are almost limitless."

Perhaps it’s not surprising, then, that people tend to take notice when a small development team claims that their game is reminiscent of Quake 3, Unreal Tournament, and Crimson Skies, and will be releasing at a budget price. Enter Strike Vector, developed by the aptly named Ragequit Corporation. Like the games it claims to draw inspiration from, Strike Vector is fast, intense, and brutal, and features an incredibly steep learning curve. This is a game about fast-paced aerial combat, where skill is everything and one well-placed shot is the difference between zooming off to find your next target and staring at the respawn screen. This is a hard, unforgiving game, and it makes no apologies for that. You will die. You will die a lot. And you will love it anyway.

Unlike most arena shooters, Strike Vector doesn’t put you in command of a human avatar. Instead, you’ll take command of the titular Vector, a fighter with the unique ability to switch between the jet-esque Vector mode, and the slower, more precise hover mode. The former allows you to move across the map quickly, boosting in and out of the tight, claustrophobic environments, while the latter allows you to move slowly and quietly, aim more accurately, and execute precision dodges. You’ll need to learn how to make the most of both modes if you want to win, and it is initially difficult to grasp the ways that they can work together.

In all likelihood, you’ll spend your first few games racking up deaths while you try to learn the ins and outs of the game’s movement, but once you do, the possibilities are almost limitless. Switching to hover mode brings you to a stop almost instantly, which allows you to turn on a dime, lure opponents into quick ambushes, and navigate some of the maps’ more claustrophobic sections with ease. 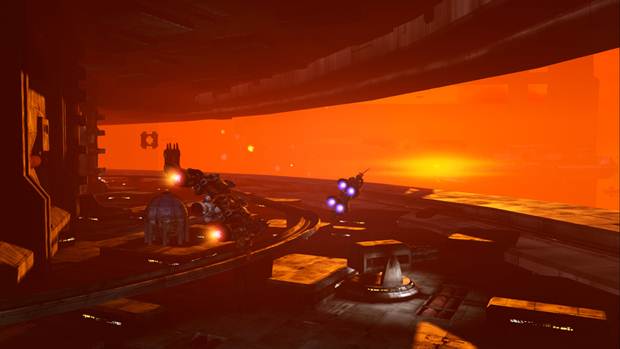 "The larger, more open maps favor the full-auto nature of the gatling gun, while rockets are at their best when you’re up close and personal. Each weapon can be customized with a number of perks, which improve anything from damage to reload speed."

The sheer freedom of movement in Strike Vector means that the maps don’t have any natural chokepoints. Combat is extremely organic, and tense shootouts can and do occur on just about every part of any given level. Still, map knowledge is key, and there’s nothing quite like leading an opponent through a series of tight corners and dangerous curves before slamming to a stop at a key area and having him fly right into both barrels of your rocket launcher.

Picking the right weapons for each map is crucial. There are eight in total, ranging from homing missiles and rockets, to gatling guns and rail cannons, and you can have any two (or two of the same kind) equipped to your Vector at a time. The larger, more open maps favor the full-auto nature of the gatling gun, while rockets are at their best when you’re up close and personal. Each weapon can be customized with a number of perks, which improve anything from damage to reload speed.

In addition, each ship has a special perk, which might reduce the damage you take or make it harder for enemies to spot you on radar, and a special ability, ranging from a boost to cloaking. You have access to all of this from the beginning of the game, so the question isn’t what you’ll unlock; it’s what you’ll use. You even have a chance to get a kill after you die. All you have to do is guide your Vector near the enemy after you begin to spiral out of control. The ensuing explosion will do the rest. 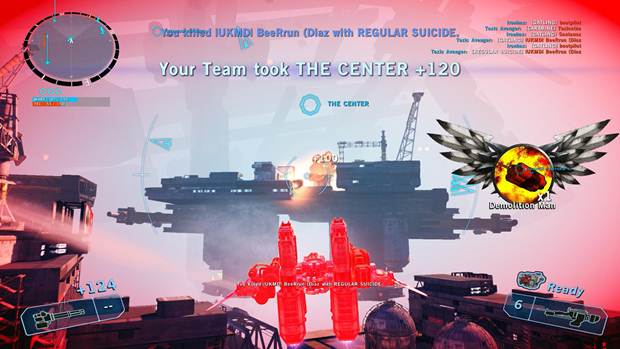 "The real problem is the lack of game modes. Strike Vector only features four. "

Unfortunately, the game doesn’t teach you how to do any of this. The tutorial is little more than a series of slides explaining what you can do without showing you how to do it. You’ll have to do all of the learning on your own, but the game does provide a mode that allows you to fly around the empty maps. Knowing the maps is important, as the knowledge will allow you to make quick escapes, learn the location of health and power ups, and generally have the edge on your opponent in every situation.

Thankfully, the maps themselves are fairly well-designed, and offer a good deal of variety. Many are industrial in nature, and each features many tight corners, hiding places, and a number of small tunnels that will challenge the skill and nerve of even the best pilots, though some are noticeably more open than others. Maps are also gorgeous, and Ragequit has made the most of the Unreal Engine’s ability to render gritty areas, flashy colors, and a lot of particle effects. The sound design is equally impressive, and the game is almost always a visual and audio treat, especially in the heat of combat.

The real problem is the lack of game modes. Strike Vector only features four. There’s the standard deathmatch and team deathmeatch, as well as Bounty Hunter, which tasks you with racking up kills to earn a bounty, and hunting down the players with the largest one in order to steal it, and Domination, a territories-based mode that challenges you with capturing and holding key points on the map. 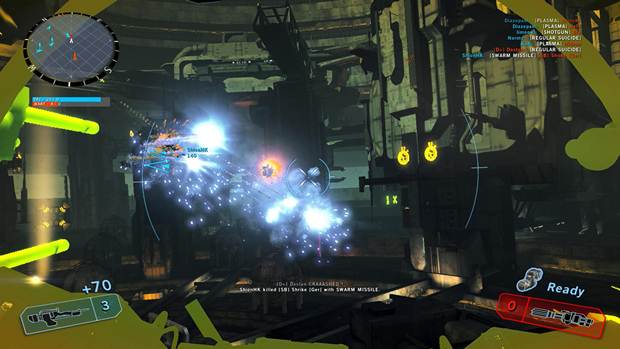 The game is intense and exciting no matter what mode you play on, but at the end of the day there just isn’t a whole lot to do. Playing will gain you levels and unlock visual customization options and concept art, but there’s no carrot on a stick approach here. Normally, I’d applaud this type of design, but there just aren’t enough different maps and modes on display to keep you playing for extended periods of time. Ragequit has said that all additional content will be free for those who purchase the game, but right now, Strike Vector is a little lacking.

Fortunately, that’s not really a problem when the gameplay is as good as it is. There’s nothing out there quite like Strike Vector, and very few shooters are as good in terms of pure combat. Ragequit has something truly special here. They just need to continue to build on it.

Combat is dynamic, unique, and exciting. Unparalleled freedom of movement. You have access to everything right off the bat. Good visual and audio presentation. Maps are varied and well-designed. Steep learning curve means you can always find ways to improve. Customization allows you to play however you want.

Not a lot of maps or modes. Tutorial is practically non-existent. Steep learning curve makes starting out is pretty painful.

Final Verdict:
SUPERB
Strike Vector is an excellent arena shooter with unique ideas and great gameplay that’s held back by a lack of maps and modes, and a poor tutorial. Still, this is an excellent game and fans of arena shooters should definitely check it out.
A copy of this game was provided by Developer/Publisher/Distributor/PR Agency for review purposes. Click here to know more about our Reviews Policy.