This spaceship flight sim is better left at the station.

There’s nothing like an exciting space combat simulator. The best in the genre allows for deep ship and weapon customization with satisfying controls to maneuver around and destroy enemy ships with ease. Unfortunately, this is not an accurate description for Subdivision Infinity DX which was released two years ago on PC and consoles to very little fanfare. Does the port to PlayStation 5 do well to breathe life into this title, or is this spaceship shooter better left in the dust?

Subdivision Infinity DX emphasizes on its short bursts of gameplay, and that’s due to the length of its stages. Each one is quick and snappy with two phases most of the time. This lends a pick-up-and-play nature for those looking for a quick fix which can be the game’s best quality. The adventure doesn’t overstay its welcome; bear in mind the simple story is told entirely through floating dialogue icons and static portraits. The setup is something you’ve seen many times before and is not unique in the least. You play a generic man who answers a distress signal which eventually leads to a surface level adventure with a robot companion to liberate five zones.

"Subdivision Infinity DX emphasizes on its short bursts of gameplay, and that’s due to the length of its stages. Each one is quick and snappy with two phases most of the time. This lends a pick-up-and-play nature for those looking for a quick fix, which can be the game’s best quality."

Each ship has enough that is relatively unique to them to set them apart from one another but it is nothing too drastic. Differentiating factors are the typical health and shield along with shield recharge time, speed and other metrics. The variety of weapons is modest. Thankfully, getting them isn’t nearly as much of a hassle as the spacecraft, only costing coins to unlock and some semi-common materials to upgrade. While ship and weapon customization are fine, the process of getting materials leans very heavily on randomness which results in a lot of grinding. Mission rewards are randomized with each stage being relatively short and repeatable. There are no checkpoints to speak of, but this is somewhat alleviated by the time it takes to clear a stage. Another problem is, if you have trouble getting past certain levels and think that you need a better ship, you’re out of luck as material grinding rears its ugly head.

Talking about progression, there are ore deposits that have a couple restrictions surrounding them. For one, you can only mine these in exploration missions or free play so-to-speak. To their credit, this is some of the best parts of the gameplay, allowing for some chill exploration without the urgency of completing objective in stages. However, this means that to get the necessary minerals, you need to halt your mission progress. Secondly, mining equipment is required and takes up a slot in a ship’s customization. It’s frustrating then that the starter ship can’t equip these tools, and in a balanced playthrough, you cannot even get a ship that can equip them until the middle of the second area. This is primarily a hurdle in the opening portion but the choice to have a ships’ availability unlock early and not being to craft it is a classic case of unbalanced progression out the gate.

The controls are very mixed and easily the weakest aspect of the title, since it impacts every part of combat and exploration. To start, Subdivision Infinity DX does not use an analog stick for thrusting, instead opting to have thrust and reverse thrust mapped to L2 and L1 inputs respectively. In addition, there is no dodge maneuver and the face buttons do nothing. Tilting the left stick allows for strafing and the right stick handles pitching up and down. In fact, there is no control customizability whatsoever. Granted, full button remapping might be too much of an ask, but only having one control scheme is very inconsiderate for accessibility. Simple things like swapping the sticks and the triggers aren’t available, so what you see is what you get. Fans of space flight sims each play the games differently, so a bit of customizability would have been a nice addition. Even if this scheme can be committed to muscle memory, it still felt a bit off compared to other titles in the genre. 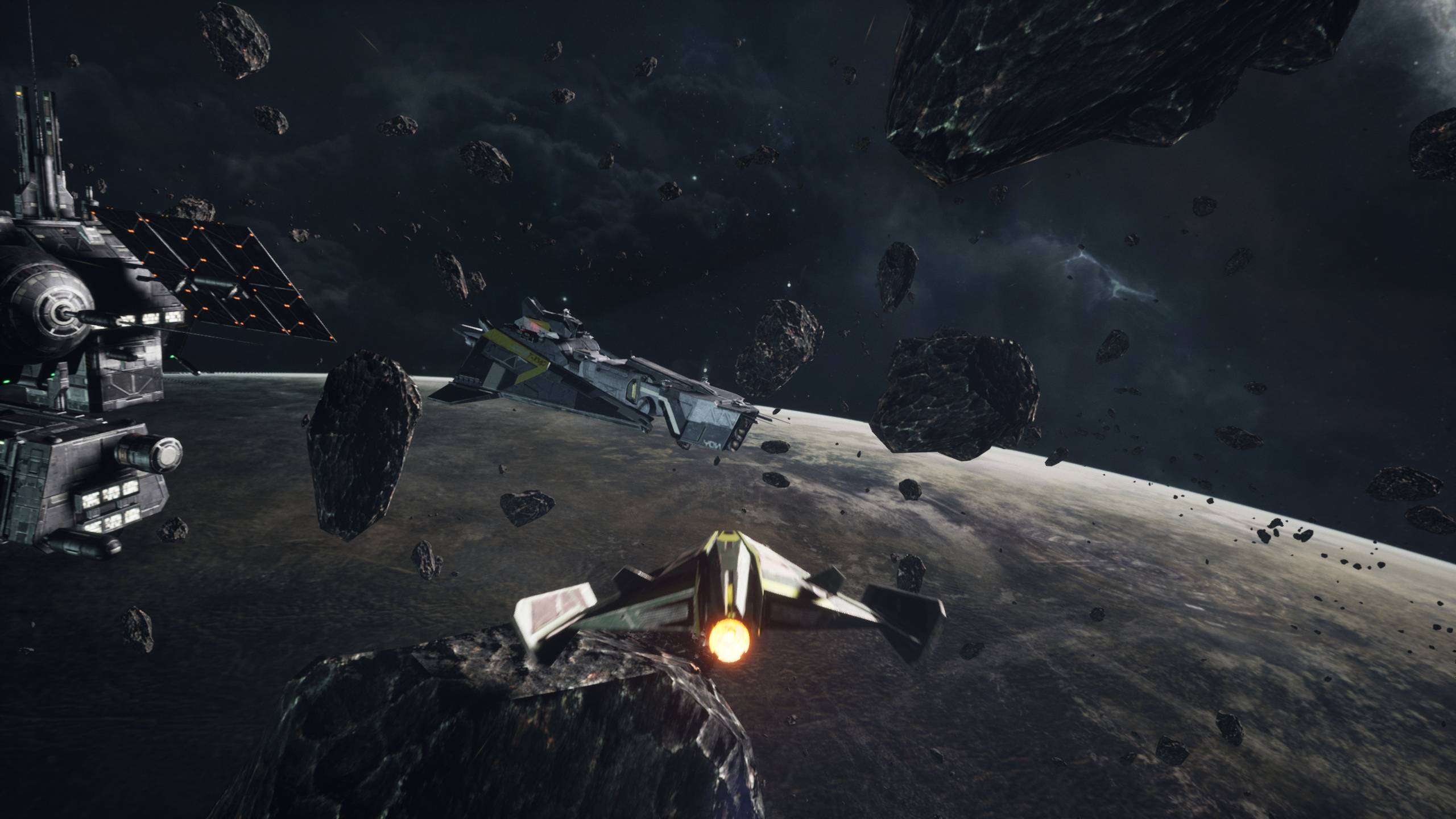 "The controls are very mixed and easily the weakest aspect of the title, since it impacts every part of combat and exploration."

Something I found very disappointing is that Subdivision Infinity DX has zero DualSense support other than traditional rumble. With all the weapons on offer, tuning the adaptive triggers to their fire rate would have been a really cool addition to say, “this is something that can only be done on PS5, let’s take advantage of this opportunity.” The approach taken is nothing ventured, nothing gained; meaning that this version is a straight port with little to no improvements over previous release. Adding Adaptive Trigger support in this game may not have been easy, but this is still a missed opportunity and could have helped bring a better level of immersion. All told, the control scheme makes navigating each area just okay to handle, but dogfights end up feeling sluggish. The auto aim is very generous but dodging projectiles is difficult since the enemy AI will always lead ahead of where you’re going. Trying to not get blasted can be disorienting. It just feels like enemies circle around you on a constant basis which really isn’t engaging. There is an easy difficulty option which I recommend as it makes fights end quicker, and the damage taken is somewhat reasonable unless you get swarmed too much. However, enemy aggression is unchanged

Aside from fighting smaller ships and destroying bases, there are also boss battles, the first of which is a form of jousting. This boss has one primary goal in mind, and that’s to ram into your ship for an instant kill. The immediate instinct is to get away as fast as possible and turn around, but these ships have so much shield and health to the point where it’s best to rotate to lock onto the boss as much as possible and only move when absolutely necessary. This way, you can do enough consistent damage to remove the shields. Since the strafing is very slow, this boss fight is bound to be frustrating and makes these particular missions a pain to play. I am all for difficult boss fights but an unbalance one is nothing but a deal breaker.

The artwork is pretty standard for the average spaceship simulator. The skyboxes are the standout and are the main visual aspect that sets each of the five areas apart. This combined with the populated space of asteroids and stations are almost wallpaper worthy. When it comes to playing though, the terrain and enemy models are overused to a ludicrous degree which takes away from what little variety there could have been. The same can be said about the sound design and music which can get very repetitive. They are very inconsistent and the music will often drown them out. Camera motion blur is in full swing in addition to object motion blur, causing some pretty intense disorientation. In addition, explosions not only drop the framerate but also cause the screen to shake, rendering the camera shake toggle in the options menu useless. 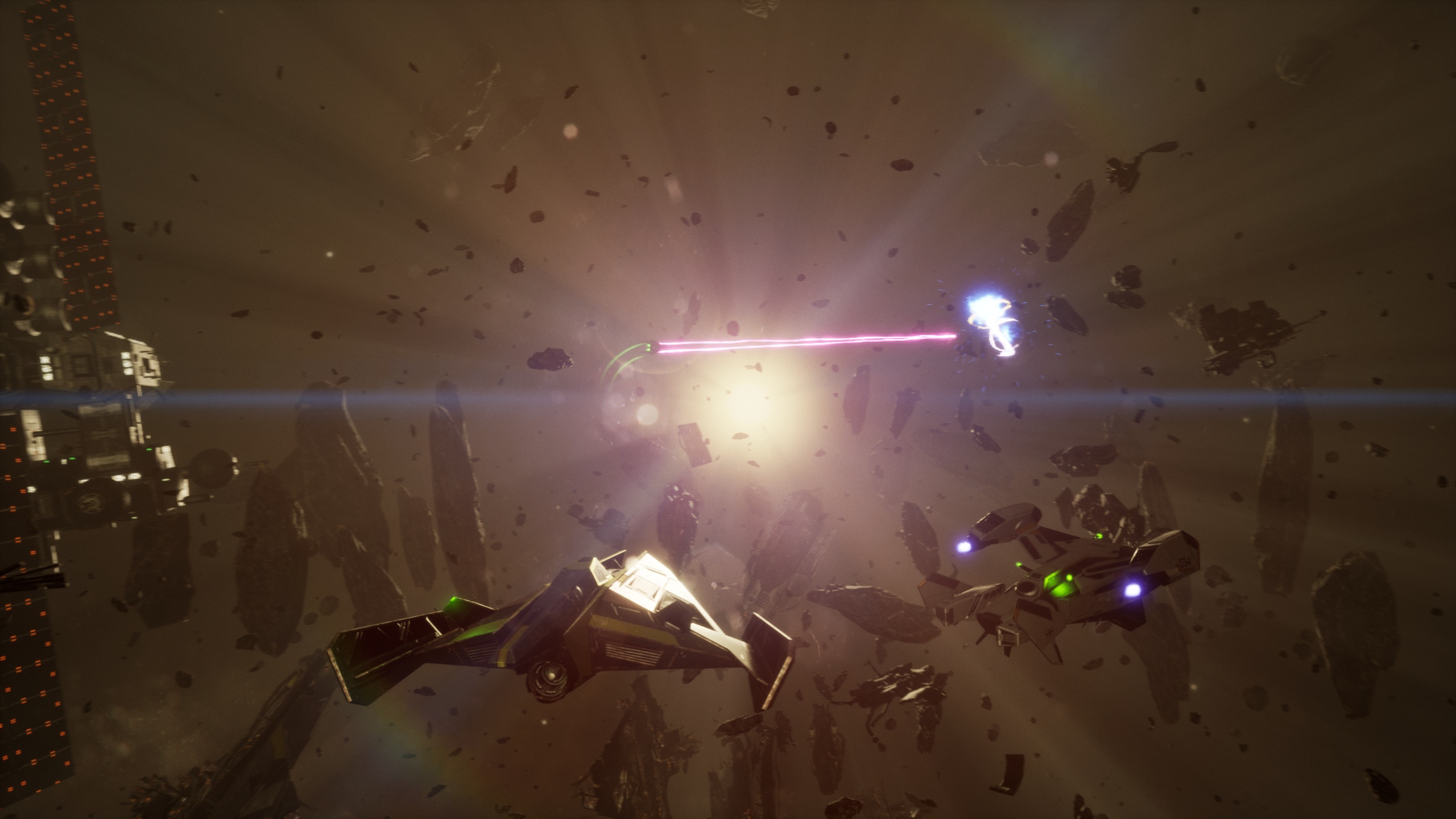 "Subdivision Infinity DX on PS5 is a straight up port of a spaceship simulator that could have used some major adjustments and additions."

Subdivision Infinity DX on PS5 is a straight up port of a spaceship simulator that could have used some major adjustments and additions. Not having DualSense features on a dedicated PlayStation 5 version seems like a missed opportunity and could have gone a long way to make this version of the game unique. Instead, this spaceship affair has only a couple noteworthy qualities. Even though the ship customization gets the job done and the skyboxes are nice to look at, there are a host of issues with accessibility and difficulty that could make this dogfighting experience unwelcoming for newcomers to the genre.

Final Verdict:
AVERAGE
Subdivision Infinity DX may be worth a try for fans of space combat games, but stumbles out the gate with zero controller customization options and a padded out progression system.
A copy of this game was provided by Developer/Publisher/Distributor/PR Agency for review purposes. Click here to know more about our Reviews Policy.