Submerged Interview: The Mysteries and Attachments of Sunken Cities

Mystery is often one of the prime driving forces of life and mysteries in video games form the basis for some of the greatest stories in the industry. Upper Cut Games, a relatively small indie studio, will be looking to use some of that mystery and intrigue for Submerged, its upcoming adventure title for the PS4. Sunken ruins and ambiguous characters may be nothing new but there’s something about the journey of Miku and Taku that looks unabashedly appealing.

GamingBolt spoke to Upper Cut Games’ Ed Orman about the design process for Submerged, working on the PlayStation 4 and other aspects of the gameplay. Could we also squeeze out a few details behind the mysterious story? Let’s find out. 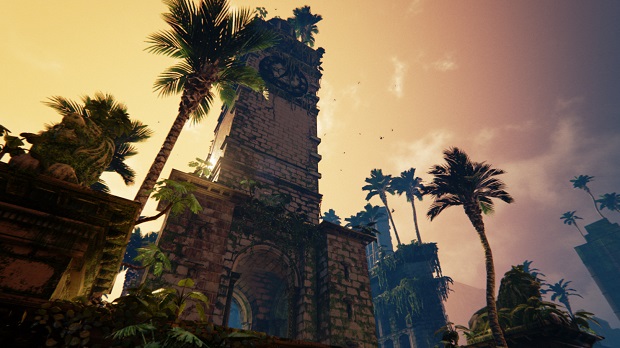 " We didn't want you to be stressed out about how long you were taking to boat around, and at the same time we need to establish how important Taku is to Miku."

Rashid K. Sayed: Submerged will be Uppercut Games’ first current generation console title. How has the experience of transitioning from iOS and Android titles like Epoch to PS4 and Xbox One been like for the studio as a whole?

Ed Orman: It’s been a lot of work, to be honest. Although most of us have console experience from our time at other companies, we’re now using a new engine on new consoles. So there’s definitely been a learning curve just from a technical point of view. Design-wise, one of the biggest challenges has been making a game with a third-person camera – something that, while it has been done many times before, is notoriously difficult to get right.

Rashid K. Sayed: Submerged appears to have a mysterious and yet very plot-driven story with the two siblings Miku and Taku trying to survive in uncharted territory. Was it more than coincidence that brought them to this city?

Ed Orman: It is indeed a mystery; one of the key mysteries of the game! So I don’t want to talk about it too much. Suffice to say that over the course of the game, you will slowly learn what brought them to this city, and what happened to the city itself.

Rashid K. Sayed: The game comes across as adventurous but fairly safe with no failure states. How does this kind of relaxing atmosphere clash with the immediacy of Miku’s mission to nurse Taku back to health?

Ed Orman: That’s a great question – it’s a really difficult balancing act. We didn’t want you to be stressed out about how long you were taking to boat around, and at the same time we need to establish how important Taku is to Miku. So rather than focus on the immediacy of the problem, we’ve worked hard to make you feel the attachment between Miku and Taku. Their relationship, and how they got here, is ultimately more important than the actions Miku is now undertaking.

Rashid K. Sayed: What served as the inspiration for the mysterious, submerged city? For some reason, the first thought that comes to mind is “Venice” and Submerged displaying what it could ultimately end up as.

Ed Orman: I’ve always loved post-apocalyptic settings, and the mystery and wonder that they can provide. But a lot of the settings have been well trod by this point (by myself and others). So I’m always on the lookout for something fresh. 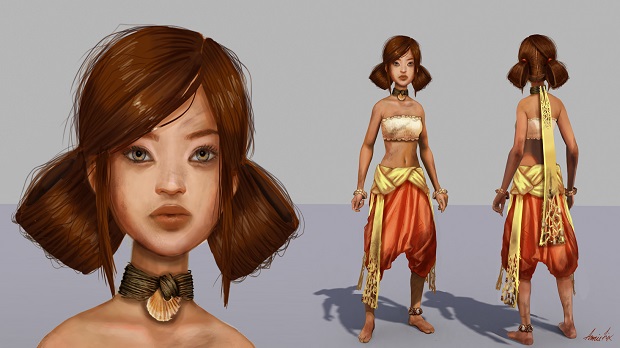 "Submerged is a very casual game. Each building you climb is a navigation puzzle where you have to analyze and find the correct path. It's not meant to be super-hard; rather, we want you to be able to take your time and stay "in the moment" while you're exploring."

Then one day I saw a GTA mod that raised the sea levels so that the city’s buildings ended up sticking up out of the water like mangroves, and that image hit me immediately. Here was a setting we hadn’t seen before, one with the potential for serenity and exploration. From there, we started building out the world, answering questions: what might have happened to submerge an entire city? What kind of buildings would be cool to explore? Who would live there? What would happen to the rest of the world?

Ed Orman: As the next incarnation, Unreal Engine 4 is easier to use in almost every way from Unreal Engine 3. Some standout features that help smaller teams are Blueprints to automate repeated level building tasks and the World Composition Tool we use to handle the Streaming and Level of Detail in the city itself. They have completely overhauled the Animation systems and Renderer, these help us create AAA visuals for the game. It’s not finished yet: Unreal Engine 4 is in Beta itself, so you’re dealing with a moving target and sometimes there are nasty surprises when you upgrade to the latest version and things break!

Rashid K. Sayed: Along with exploration, what kind of gameplay can we expect in Submerged? Will there be various puzzles or any platforming aspects to get through?

Ed Orman: Submerged is a very casual game. Each building you climb is a navigation puzzle where you have to analyze and find the correct path. It’s not meant to be super-hard; rather, we want you to be able to take your time and stay “in the moment” while you’re exploring.

For the completionist, there are many hidden objects scattered around the world, some of which fill in story holes, and others provide upgrades to your boat.

Rashid K. Sayed: How long can one expect Submerged to last, at least insofar as the story is concerned?

Ed Orman: It really depends on how quickly you want to progress. And because we’ve built it to be a place that we want player’s to want to hang out in, we don’t really think about it in terms of total play length. 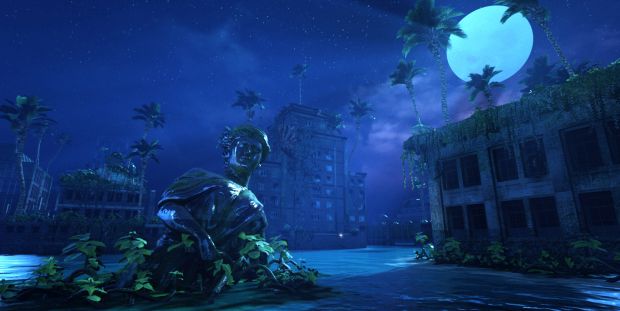 "Whilst there can be incentives to choose one console over another, and production reasons to focus on just one console at a time, we felt that using Unreal Engine 4 opened the door to both of the major consoles, PC and mobile all at the same time, so we went for it."

Rashid K. Sayed: Submerged will release on Xbox One, PS4 and PC. What differences did you notice while working across the various platforms?

Ed Orman: The same game is pretty much running on all 3 platforms, and each platform has its own quirks. With the consoles these are dealt with in small settings changes, like how you would tune the setting on your PC, each platform has to be tuned to look as good as it can at the best possible framerate. We didn’t have to write any special rendering code or create separate models or textures for the 3 versions. This is great from a developer point of view, and for players, as they know they are getting the same experience no matter which platform they own.

Rashid K. Sayed: With various indie studios choosing one side or the other in today’s console war, what motivated the decision to bring Submerged to both consoles?

Ed Orman: It’s largely a business decision – we want our games to reach as many people as possible. Whilst there can be incentives to choose one console over another, and production reasons to focus on just one console at a time, we felt that using Unreal Engine 4 opened the door to both of the major consoles, PC and mobile all at the same time, so we went for it.

Rashid K. Sayed: Last but not least, can we expect a moderately happy ending with Submerged?

Ed Orman: We’re still tuning the games settings on each Console. We’re a small independent developer, so arbitrary technical goals is not something that drives us, nor do we have the bandwidth to try to chase these types of goals. We leave that for the big publishers to chase. 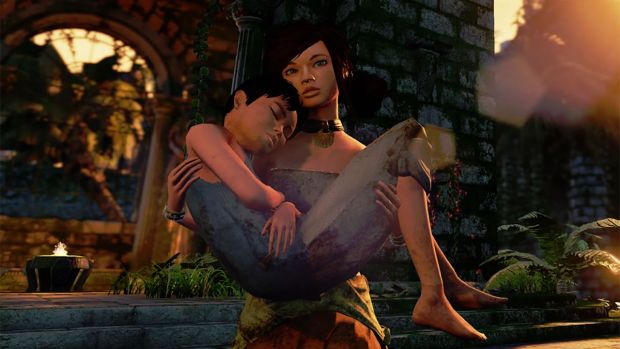 "Even console specific systems like XBOX Live, PSN, (or even Steam on PC) are already implemented in the engine, and while there is still some glue that must be written to hook everything together, we generally use the engine on a higher layer."

Rashid K. Sayed: Submerged looks pretty sweet in my opinion, how taxing was it on the PS4 and Xbox One GPUs?

Ed Orman: Submerged is definitely a graphically heavy game, most of the optimizations we have done to get the open world city running has been on the GPU side. It’s safe to say we’re trying to squeeze every last inch we can out of them.

Rashid K. Sayed: Furthermore, what is your take on the differences between the architectures of the consoles? Do you find them similar contrary to what is being said out there?

The good thing about licensing an engine like Unreal 4 is that we don’t have to worry about architecture or low level implementation. Even console specific systems like XBOX Live, PSN, (or even Steam on PC) are already implemented in the engine, and while there is still some glue that must be written to hook everything together, we generally use the engine on a higher layer. There are hundreds of folks at EPIC games who take care of the low level rendering implementation for us!

Rashid K. Sayed: What kind of modifications did you make to Unreal Engine 4 for the consoles? Did any of the consoles posed a challenge of any sorts during this transition?

Ed Orman: We are a very small studio (six people full-time), and our focus is on gameplay coding rather than tech, so our goal in general is to modify as little of the engine as possible.

Rashid K. Sayed: Shifting our topic slightly towards other topics, Microsoft’s Xbox One already has a low level API that resembles DirectX 12. What possible benefits do you think DX12 will bring to games development on Xbox One?

Ed Orman: EPIC will implement this when it’s available and then we’ll be able to evaluate the benefits.

Rashid K. Sayed: Is there anything else you want to tell us about Submerged before we let you go?

Ed Orman: Submerged is nearly done! We’re now aiming for a ship date in Summer 2015, so keep your eyes peeled.