Super Mario Maker 2 Will Have Limited Editions With Stylus, 1 Year of Switch Online, and More

The UK region will have multiple ways to buy the next Mario title.

We reported yesterday that to sidestep the lack of stylus on the Switch, Super Mario Maker 2 will  give them out to those who pre-order the game. The first Super Mario Maker, which released on the Wii U with a later port on the 3DS, used the touch screen extensively, leaving many to wonder if we’d be forced to use our fingers for the sequel. Not only is a stylus coming, though, it looks a lot of extras are coming as well, with two different limited editions of the game.

As you can see from the pictures below, there will be two limited editions versions of the game via the Nintendo store. Both versions will include a stylus and steelbook with one version coming with a Super Mario Maker 2 themed pencil and notepad, and another with a full Super Mario Acorn Plains Diorama Set. Maybe most important is that both versions will also come with 12 months of Nintendo Switch Online. Nintendo hasn’t detailed to what extent the game will be affected by online, specifically whether or not you can upload and download constructed levels with or without NSO- but we can probably assume that that will indeed be the case.

It’s also worth noting that as of now these limited editions are only available in the Nintendo UK store. Whether or not they, or another version of them, will launch in other regions is unknown at this time. Super Mario Maker 2 will launch June 28th exclusively for the Nintendo Switch. 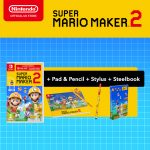 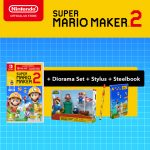