Super Mega Baseball 3 offers a lot of fun elements, but they never quite combine into a cohesive whole.

The Crocodons and the Moonstars stand out on the field. Kitty Kauffman stands at the plate, her whole team waiting to see how her turn at bat works out. It’s almost the end of the game, and the scores are tied. The pitch comes screaming over the plate. Two whiffs, and things are looking bad. That’s when she pulls it off. A power hit slams into the ball, sending it skyrocketing across the field. One run, then another, and the Crocodons win the game.

At its best, Super Mega Baseball 3 does a good job of capturing these kinds of exciting moments. It has simple, easy to understand baseball mechanics, and yet underneath the surface hides a solid enough simulation as well. And yet, while nearly every aspect of the game works well on its own, the disparate elements of the game never quite gel into a fully cohesive experience.

"At its best, Super Mega Baseball 3 does a good job of capturing these kinds of exciting moments. It has simple, easy to understand baseball mechanics, and yet underneath the surface hides a solid enough simulation as well."

At its heart, SMB3 is an arcade baseball game. No real teams, leagues, or players are featured, with the game opting for fictional stand-ins. These teams are fairly creative, for the most part, with some fun team names and logos that keep them interesting and mostly distinct from one another. These teams can also be fully customized, allowing the player to really dive into a team that they’re invested in, and really make the team their own.

The custom players don’t fare quite as well, however. They’re distinct enough from one another, and just as customizable as the teams, but the visual style of the game betrays itself a bit here. The game has a very cartoonish and exaggerated visual style, and the characters almost resemble caricatures. In some cases, this works. The faces are very expressive, and the animations bold and distinct. But some of the characters just don’t look good. The eyes won’t be quite right, or the mouths just a bit too wide. There are some characters that are really endearing looking, and some that are downright terrifying.

Still, that doesn’t really affect the actual baseball experience here, which is mostly solid. As in all other aspects, SMB3 opts for a generally simplified set of baseball mechanics compared to other games. Most aspects of the game only require one or two button presses and some good timing. Batting, for example, requires you simply to line up a reticle to a target that represents the ball’s incoming trajectory, and then time your swing well to hit the ball. Pitching is similar; you select a pitch, line a reticle up to your intended target, and let the ball fly. Fielding, unfortunately, doesn’t hold up quite as well. The controls mostly work, but the game has an awful habit of swapping between fielders on the fly for you, without any real warning. This means plenty of times, you think you’re controlling one fielder, only for the game to decide to switch you to another, supposedly more optimal fielder. This can cause more than a few botched plays, especially early on before you know to start looking for it. 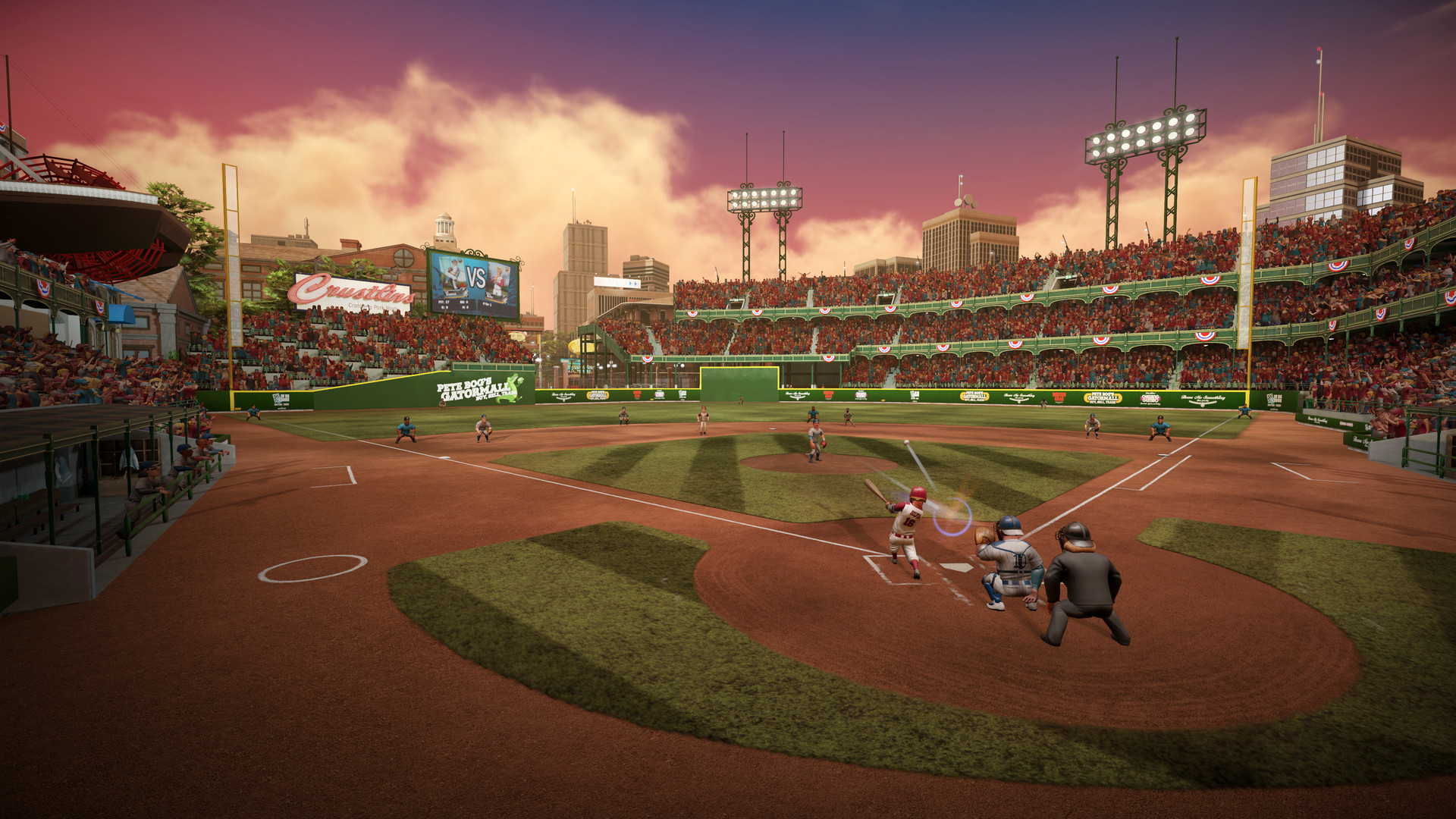 "As in all other aspects, SMB3 opts for a generally simplified set of baseball mechanics compared to other games."

On the field gameplay is mostly solid, despite the problems with fielding, but it also has a tendency to be somewhat uneven in its difficulty. The game has a very customizable difficulty system, called the Ego Meter, which can be adjusted to values from 0 to 99. This level of variety is appreciated, but unfortunately, I was never able to quite find a difficulty level I was satisfied with. At lower levels the game was generally very easy, almost trivially so. The AI was far too easy to strike out, and far too poor at doing the same. At higher levels, meanwhile, they become almost prescient, especially in their batting.

Off the field, the game dives a bit deeper into simulation territory. It features a seasonal management mode and a full franchise mode. The season mode is fairly simple; it’s basically just a series of matches that you play with the same team. The franchise mode, on the other hand, allows you to fully manage your team’s finances, roster, contracts. You control every facet of your team in this mode, albeit still fairly simplified compared to many other games in the genre. The mode works well enough, though I would have preferred it lean a little farther in one direction or the other; it’s not quite deep enough to truly satisfy a simulation urge, like say MLB The Show, but at the same time is just deep enough to feel like a break from the game’s otherwise light and arcade-y mechanics. It results in a mode that, while fun, sometimes feels like a different game than the rest of it.

Aside from those, the game offers a couple of other fun, more arcade style modes to play, such as a pennant race and an elimination mode, where the losing teams in the bracket are knocked out of the competition entirely. Personally, I felt that the game shined the strongest when it embraced these more arcade-y modes. Here, the game is free to let its goofier nature shine through, and it results in a game that can be a lot of fun with a lot of variety. When the game attempts to cross over into simulation territory, the simplicity of the game, which is a strength in the arcade portions, becomes more of a weakness. 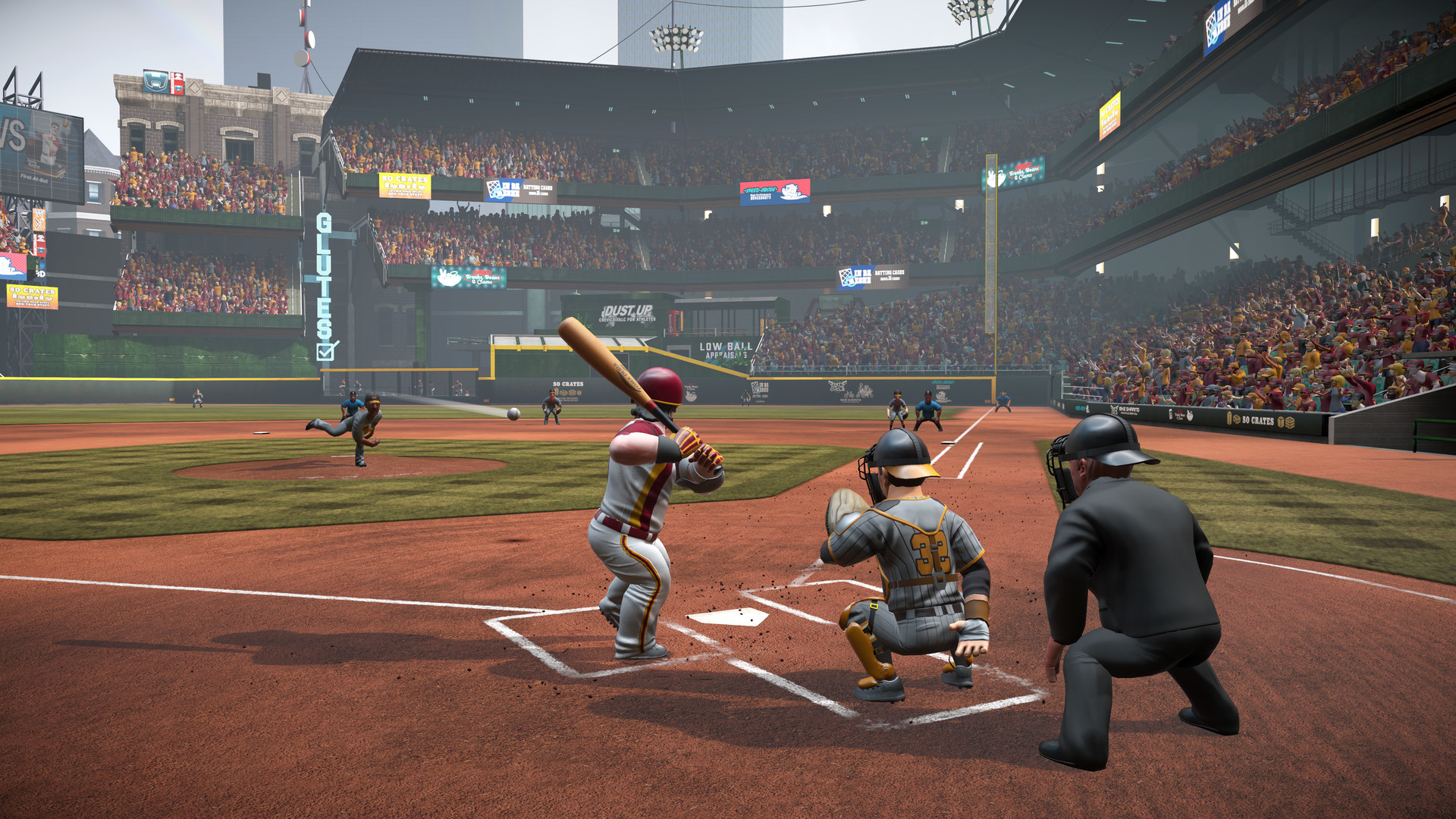 "Personally, I felt that the game shined the strongest when it embraced these more arcade-y modes. Here, the game is free to let its goofier nature shine through, and it results in a game that can be a lot of fun with a lot of variety."

Customization is another strong suit of this game. Practically every facet of the experience can be customized, from players to teams and uniforms. You can tweak a player’s entire physical appearance, from their face and hair to their uniform and number to their bat and even their behavior on the field. Teams can be tweaked as well, changing colors, logos, and home stadiums. The faces still aren’t always great, but overall it does a long way to getting the player invested in their team, which is important in a game without and official license.

Overall, Super Mega Baseball 3 is a fun, arcade-y baseball game with a lot to offer, especially for more casual sports fans and those looking for a lighter, less demanding experience. Most of the on-field gameplay is fun and easy to learn, the visuals, though not always the best, are bright and easy to follow, and the game’s modes are mostly enjoyable. The game does flounder a bit when it attempts to cross over into simulation territory, as it doesn’t quite commit far enough to either simulation or arcade silliness to stand out in that regard. Overall, however, Super Mega Baseball 3 is a solidly enjoyable experience. If you’re looking for the next big thing in baseball simulations, look elsewhere. But if you’re just looking for a fun, lighthearted sports experience that you can pick up and play, there are way worse games on offer than this one.

Easy to learn, fun to play mechanics on the field; Solid customization for every aspect of the game.

The game tends to be a tad too easy on average; Franchise mode doesn’t quite pan out like the rest of it.

Final Verdict:
GOOD
Super Mega Baseball 3 is a fun arcade sports game with plenty to offer for those looking for something to pick up and play. It lacks depth, but makes up for it in simple fun.
A copy of this game was provided by Developer/Publisher/Distributor/PR Agency for review purposes. Click here to know more about our Reviews Policy.