I had been previewed Supremacy MMA before it came out and the idea of the game sounded pretty cool.  A more arcade style MMA games rather than how the past MMA games have been presented as far as controls and mechanics.  This unique fighting style in an MMA game intrigued me and I felt like people that weren’t necessarily MMA fans could enjoy it.  However I could not have been more wrong as the unique arcade controls just do not seem to mix with the traditional MMA mechanics in past games like UFC undisputed.  Take UFC Undisputed for example as it was an entirely new fighting mechanic system that I had to learn, but it made sense and I loved it.  Just starting off with Supremacy MMA, it took quite a while just for me to win a match, so for me at least, the game was very hard to control even after looking at all the moves, combos and tutorials. 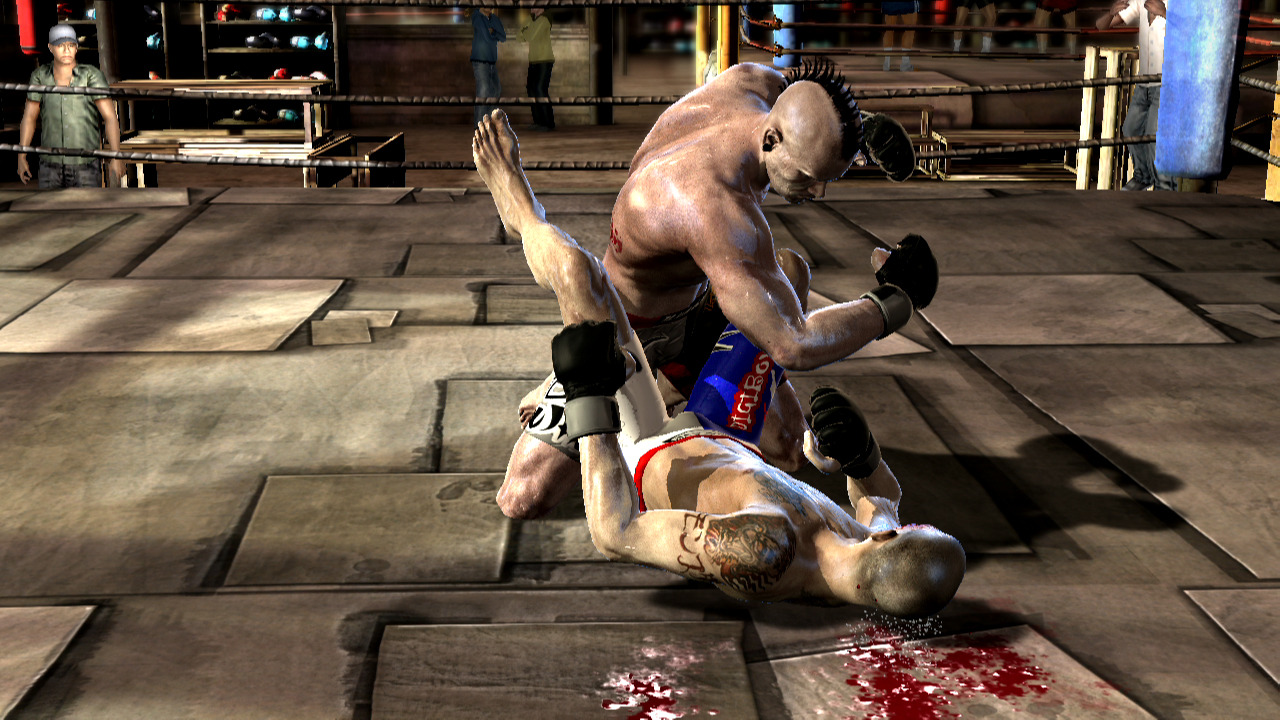 Now it might just be me, as this kind of game just might be your cup of tea, especially if you did not enjoy any of the other MMA games on the market.  For example, while on the ground mostly all the controls revolve around the ‘A’ or ‘X’ button (depending on what platform), combines with the direction you use point the joystick.  That’s not to say you can’t use the other buttons, but I believe it was the developers way of creating a more simplified MMA game with a more arcade style of fighting.  Another classic example of this is your health bar, as once it has diminished, you are finished.. instant knock out.  At around this point, the game was really starting to piss me off as I still did not know how to dominate someone in the ring.

There are only a handful of fighters in the game which right away gave me a kind of WTF, kind of feeling.  I then realized that you could pick a fighter and each one when through a unique story mode.  The aspect of this and the story actually moving along the timeline events of their lives, true or not was pretty cool.  Unfortunately, all the cut scenes are that hand drawn type of style, the stories were not all that exciting and it did not help between the lack of quality of the voice overs as well as the way it was all presented.  There are also a whole of two women you can fight with as well as go through their story modes as well.  I was personally looking forward to having girl on girl fights but the whole experience, between the lack of fighters and the dullness of it did not cut it for me. 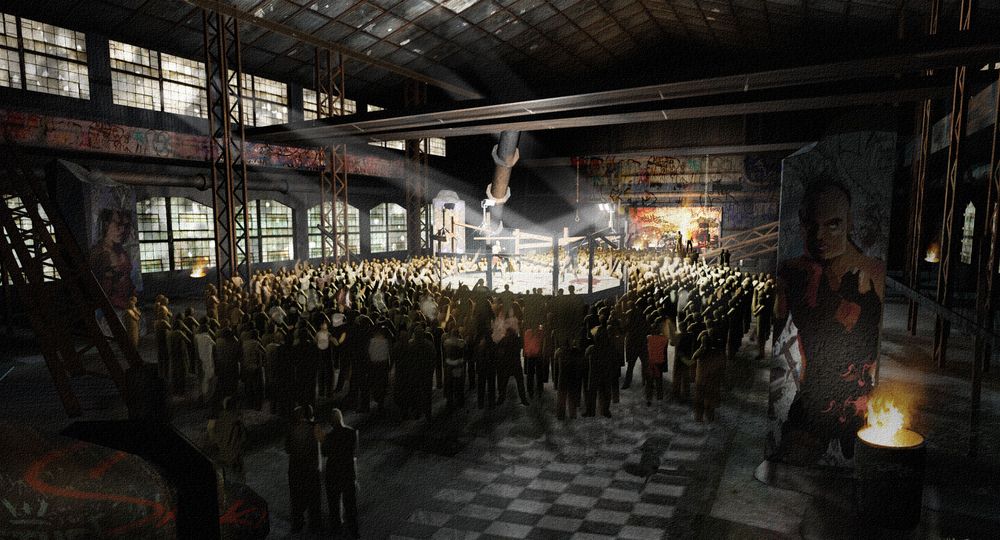 One thing that Supremacy MMA is good for is its pure brutality.  You don’t just get bloodied up in this game as they take it to the extreme where there are almost no rules or that old school ‘Pride’ fighting way.  I can’t say I wrecked anyone but I was able to kick people when they were downed, I got head butted while laying on my back and I lost a match as one of the lady fighters because my leg was broken in that sort of way that should never be broken, where it makes you cringe just to see it.  If I could do that to fighter on command, I think I would have enjoyed that much more.  Another great aspect of the game where the different arenas, as there is a ton of different ranges to choose from.  You can fight in a Dojo, an Octagon, a 4 sided rope ring to a Steal Cage and more.

Each fighter has their own unique style of fighting but you are pretty much limited to that style of fighting.  That doesn’t mean that you can’t go up against another fighter with a different style it just means that each fighter has their own specific moves.  Almost in the way a typical arcade fighter like Street Fighter plays, but the bottom line is that it just didn’t seem to mesh well.  You also have a meter that you can build up to do super/adrenaline attacks, which is something I was not able to really take advantage of.  There is Xbox Live of course but there was connection issues which in a game like this is the last thing you need. 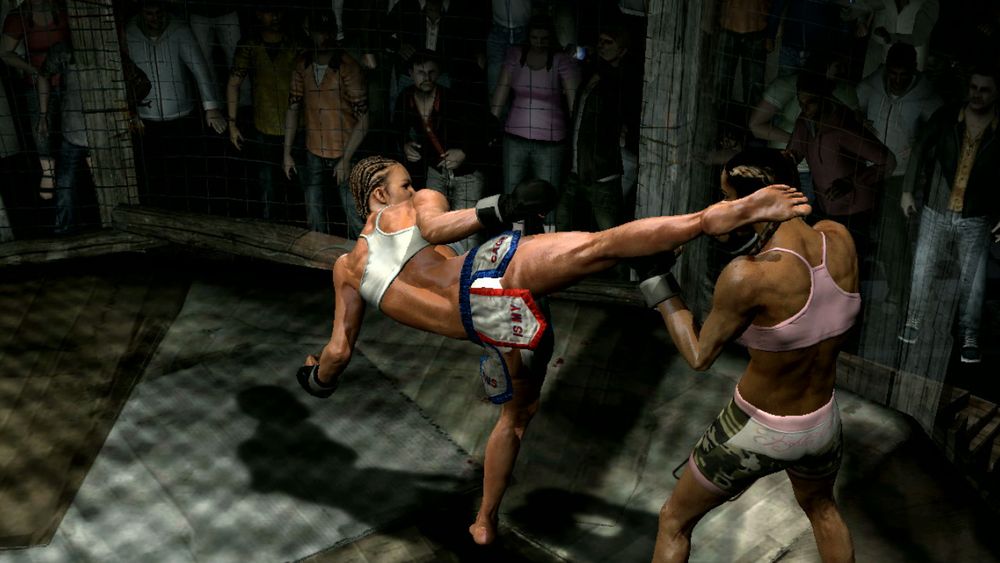 I wouldn’t want to mess with these ladies

Tournament mode is another option in the game as well as the ‘Fight Now’ mode which is self explanatory.  There didn’t seem to be any weight classes and the fighting in general just seemed slow.  You can level up offline as well as online where you might gain a new pair of shorts to wear, but for that you really need to win.  Submissions are awkward and the whole fighting mechanics in general just seem so sluggish and uneventful.  The whole idea behind the game being an underground brutal arcade style MMA game is really cool in my opinion.  I just don’t think it came together in a way that it could have to make a much better game.

Controls are awkward and the mechanics are slow. Not many fighters to choose from.

Final Verdict:
MEDIOCRE
A totally different approach when it comes to an MMA game, with a mix of simplistic arcade style controls from a view, wrapped around a complex sport.
A copy of this game was provided by Developer/Publisher/Distributor/PR Agency for review purposes. Click here to know more about our Reviews Policy.