The First Person Shooter genre is so saturated now that we groan every time we even hear of a new FPS game. When it was announced that the 1993 classic strategy franchise was being rebooted, and that the reboot would be a- surprise- first person shooter, I cringed. Not another one, was what I thought. When I was told I’d be reviewing the game, I was a little excited. The trailers I’d seen seemed good, and the premise was certainly interesting, but I was still cautious. Now, after finally having played the game, I can finally say that while Syndicate isn’t flawless and the best First Person Shooter around, it isn’t a generic one either. 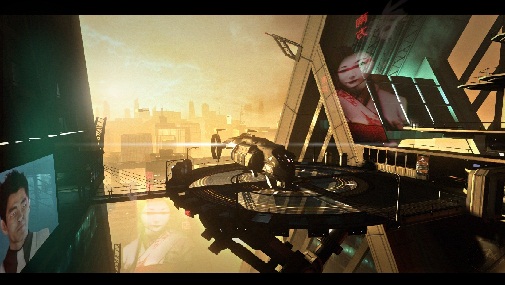 Syndicate is a slick, atmospheric game that portrays a dystopian world in the near future, with mega-corporations battling it out with each other over business- as the game makes it clear time and again, business is war. And while I’m sure it’s not a very pleasant war for the inhabitants of the in-game world, it’s a wonderful setting for us gamers. It’s highly reminiscent of Deus Ex: Human Revolution, but much more chaotic. You see civilians getting shot in the streets ruthlessly and mercilessly, you see craven beggers hiding in the corners while your gunfights play out, you see just how intense the war between all the corporations actually is…

And the fantastic presentation just hits everything home. Right at the beginning of the game, there’s a section when we’re in a corridor, and as we walk towards its far end, we see a poor, innocent civilian getting shot by one of the “bad guys” in cold blood. The cutscenes that focus on the story and that anarchical nature of the world are highlights of the campaign. The HUD of the game is also very well presented, and in a very non-generic way. Numbers and statistics and everything you need to know float across your character’s visor, and the game shows you useful information whenever necessary. When you go into the DART Overlay mode, the screen turns black and white, and whenever you switch back to the normal mode, colour bleeds back in, creating a resounding contrast. The menus are slick and stylish, and every aspect of the game is brilliantly presented. It’s a wonderful, engaging game world with brilliant presentation that sucks you right in from the very beginning.

It’s a shame, then, that Syndicate’s story never really takes full advantage of the great setting. The story is a weak and frail one with next to no interesting characters, poor characterization and a few clichéd moments. The narrative never grabs hold of your attention and you never care for the choices the characters make. The problem is that Syndicate focuses on unimportant storylines way too much. We never get to know what exactly is the purpose of this ongoing war between the organisations, if we’re with the good guys or the bad guys, what our motivations are, why everything we’re doing is so important. And so it is that we never make a connection with the game or with the story, and nothing keeps us interested in seeing what happens next.

It doesn’t help that the campaign is also poorly paced. Now, while the campaign focuses on the gunfights and the action sequences, it stays alive and thrilling, just like any good first person shooter would. The problem is that it deviates away from the shooting sections far too much. The time it spends on the intermediary cutscenes between all missions is almost torturous, and the fact that they are horribly directed and provide no input on the story or the goings-on in the world whatsoever makes them that much worse. 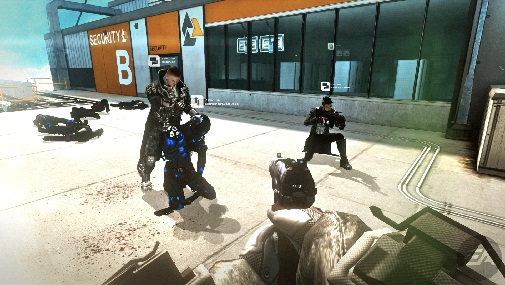 The lighting effects are jaw dropping.

Then there’re the puzzle sections. Every now and then, you come across puzzles, some of which can be solved within a minute while others can stretch on and on. Just when the shooting sections start getting thrilling and heart-pounding, they get interrupted by stupid non-action sequences. If these sequences were well built, they wouldn’t have been as much of a problem, but the fact that they’re downright drab and boring makes them the worst shortcomings of the game.

However, as I said, the action and shooting in Syndicate are top notch. It’s a lot like Killzone 2 and 3 in many respects, though not exactly like them. The game employs a cover system, which doesn’t work as well as in, say, Killzone 3 or Crysis 2, but works very well nonetheless. Your character has a hefty feel to his movements that complements the action perfectly. You peep out of cover with precision, and the extremely helpful but none-too-easy lock on system makes the shooting fluid.

The AI doesn’t let you have it too easy, though. They flank and trap you, they shoot you with great accuracy, position themselves intelligently, hide in good sniping points, and spawn at unexpected and dangerous locations. In Syndicate, you can’t just take cover behind a crate and hope for the best while you take your enemies out one by one. You always have to be on the move, and you always have to stay alert. Shootouts in Syndicate are a dangerous and exciting affair.

However, there’s more to the action than just shooting bad guys in the nuts. Since you’re a badass super-agent for a mega-corporation at war with other mega-corporations, you have some very impressive and unorthodox powers to make use of. Much like the augmentations in Deus Ex: Human Revolution (yeah, I know, the two games are very similar to each other), in Syndicate, your character can implement the DART Overlay using the augmentative DART chip in his head anytime you want. Using the DART chip, you can hack enemies’ brains and force them to kill themselves using a cooked grenade, killing others around them too; or you can make an enemy turn on his allies and kill them for you. These additions make Syndicate a very unusual first person shooter and give the action some much needed variations. Using these powers in unique ways to take out enemies is a ton of fun.

If only the campaign had more of these moments, it would have been perfect. Sure, the later levels of the game are thrilling and action packed, but the moments leading up to them are downright disappointing and sluggishly paced. That, and the campaign is a bit on the short side. Anywhere between four to six hours, and you’re done. 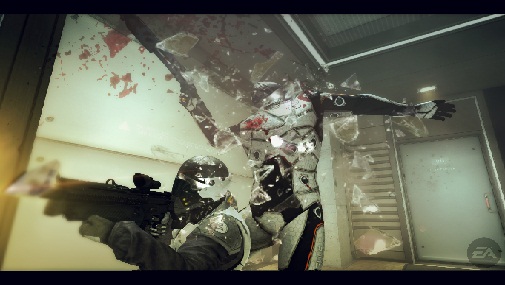 It’s a good thing, then, that Syndicate has a four-player co-op mode, and a very good one, at that. The co-op campaign is a frenetic, challenging and engaging ride that trumps the single player in almost every other way, and elevates the game’s score by at least a couple of points. The objectives are always simple- go from Point A to Point B, escort some bots, collect a package- the usual missions you’d expect from a first person shooter. However, the level design is always excellent, and the fantastic art style and visual design make the missions as great to watch as they are to play.

Barrages of bullets, chaotic gunfights and teamwork punctuate the missions perfectly. Everywhere you go, there’s a wave of turrets and bots and agents to take out, and you have to do it all with extreme precision. Skill with your guns and DART Overlays is as important in Syndicate as is  the teamwork. As long as you and your three buddies don’t work together, you’ll never be able to take out the thick skinned agents before they rip you to shreds.

The ranking system of the co-op is also wonderful. You get new abilities and points and there’s also a levelling system. You can create syndicates- clans for any other shooter- and rise through the ranks as you play more missions. It’s a great progression system that, in addition to the countless hours of gameplay found in the co-op missions, will keep you addicted and hooked to the game. 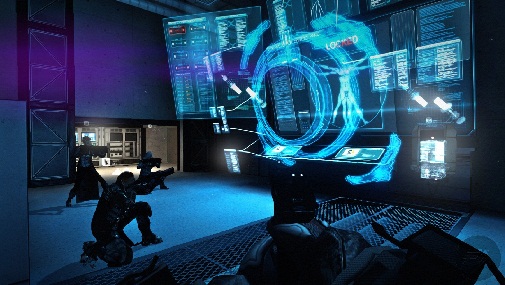 The co-op is one of the most addictive co-op components you’ll ever play.

All this makes Syndicate a flawed yet wonderful shooter that is, miraculously, not derivative of games like Call of Duty and Halo. The visuals are fantastic, other than a few texture pop ins and jaggies here and there, with some of the best lighting effects around and an inspired art style. The wonderfully composed techno soundtrack fits with the dark and futuristic tone of the game perfectly, and the co-op keeps you coming back for more. The campaign, while extremely fun while it focuses on gunfights and action, is a disappointment, but if you’re playing Syndicate to engage in a good single player experience, you’re playing it wrong. Syndicate is all about the co-op, and when you realize that, you see just how addictive and fun, if not flawed, it is.

Great soundtrack; Great art design; Awesome, slick presentation; The DART chip mechanics make the gunplay more awesome than it actually is; Thrilling shootouts; Engaging co-op that adds a lot of replay value; Good setting; Later sections of the campaign are fast paced and thrilling; Aggressive AI; Wonderful visuals with some of the best lighting effects around

Final Verdict:
SUPERB
Syndicate has plenty of shortcomings, but a thrilling co-op mode, wonderfully realized world, slick presentation and some unique ideas make it a shooter worth playing.
A copy of this game was provided by Developer/Publisher/Distributor/PR Agency for review purposes. Click here to know more about our Reviews Policy.