[HTML1] After initial leaks of concept art and a confirmation of the game's SWAT setting, official gameplay footage for EA's Battlefield: Hard line has been revealed. This is likely the same gamepl... Read More

Visceral Games' first Battlefield title will be revealed at E3. 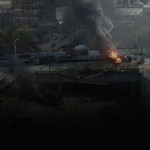 The next wave of Battlefield has finally been revealed.