Visit curated worlds with their own unique settings or join Fallout 1st and create your own Custom Worlds for up to eight players.

Starfield is Not Coming to PS5, Bethesda and Microsoft Reiterate

Though some are still holding out hope that the upcoming RPG won't be an Xbox-console exclusive, Bethesda and Microsoft have reiterated that it won't be coming to PlayStation.

A screenshot shows what look like the interiors of a space station, while a second image shows various concept models of spaceships.

New videos drop new lore and story tidbits about the cities of New Atlantis, Neon, and Akila, along with art being shown off.

It's possible that Bethesda might have opened up a new studio, focused entirely on remakes and remasters of older games. 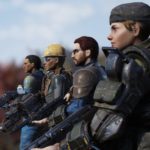 Starfield Teaser Was Entirely In-Game, Didn’t Use Any Cinematic Tools

Bethesda Game Studios' Keith Beltramini reveals that the entire in-game teaser of Starfield was made without any cinematic tools.

Bethesda Softworks finally unveiled its next big RPG, set to release next year. What should you expect? Let's take a closer look.

We recently got to see an in-engine trailer of Bethesda's Starfield, but what does that brief teaser actually tell us about the game?

"I get it. Those are all real feelings and frustrations," says Bethesda's senior vice president of marketing and communication Pete Hines.

The space-faring RPG has "some more hooks in it" that will facilitate those who just want to keep playing (while also having main quests to clear).

Starfield Has a “Lot of Factions”, “Kind of Like Skyrim” in Structure – Todd Howard

Constellation is described as "NASA meets Indiana Jones meets the League of Extraordinary Gentlemen." You can join other factions though.

Join Constellation, the last group of space explorers, and "go where you want" to "be who you want" as per director Todd Howard.

Starfield – What is Going on With It?

Things are starting to heat up with Bethesda's next big RPG as several reports point to a reveal and release date announcement at E3 2021.

The showcase will run for 90 minutes and features games coming to Xbox this holiday season, Xbox Game Pass releases and much more.

Starfield Will Receive a “Specific” Release Date at E3 2021 – Schreier

Though the specifics haven't been revealed, it will be in "late" 2022.