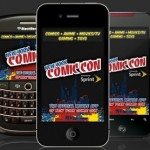 Going to the NYC Comic-Con? Grab This App!

If you are going to Comic-Con in NYC from this Thursday October 13th to Sunday October 16th, you might want to download the NYC Comic-Con 2011 App to your mobile device, iPod, etc. Presented by Sp... Read More