Destiny 2: Season of the Seraph Revealed, Features the Return of Rasputin

A well-rolled Starfire Protocol, new rolls on Hawkmoon and Dead Man's Tale, and Season 1 Legendary armor are all on sale currently.

New random rolls are available for Hawkmoon and Dead Man's Tale, along with the Season of Arrivals armor set and new Legendary weapons. 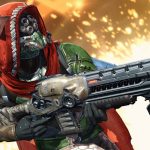 A must-have Exotic for Nightfalls, some decent Legendary weapons, and the Season of the Lost armor set is available now.

The Agent of the Nine also has a pretty good Hawkmoon roll, Season of the Splicer armor, and some new Legendary weapons.