Archive For ever Tag 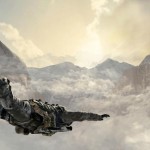 Activision's Call of Duty: Black Ops has grossed $650 million during the first five days on sale worldwide, the company announced. These huge numbers surpass that of Modern Warfare 2 and has “s... Read More