Forspoken Receives New Cutscene With Frey and the Archivist

The development footage sees Frey looking for information on Tanta Sila's castle and learning more about her fearsome opponent.

If even half of these happen, it will be a great show!

Athia has several dungeons that Frey can explore where dangerous enemies, crafting resources and other threats lay in wait.

Frey's magical arsenal is showcased over eight minutes of gameplay. She also has a levitation spell to glide with (or risk fall damage).

The focus on magic and how it interweaves with, the setting, and the journey of Frey Holland could make for an unforgettable experience. 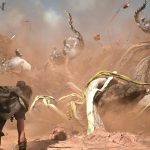