Apple sent invitations last year on March, and it turned out to be the iPad 2, and the rumours are that, iPad 3 will be revealed this year the same way as well. Heck, it's almost confirmed, and the... Read More 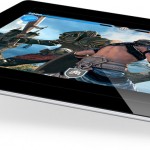 So, uh, it seems like Apple might be going with a weird strategy. It is reported by Digitimes that iPad 3 will sport a 1536 x 2048 pixels QXGA screen and will be reasonably priced. But we alrea... Read More

High-resolution displays for iPad 3 are finalized and being produced right now. Richard Shim, who is an analyst at DisplaySearch has told CNET that there are three suppliers for the iPad 3 displays,... Read More