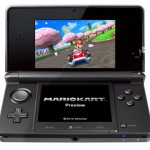 [HTML1] Mario Kart is one of the biggest Mario spin-off franchises, but keeping it fresh can be a tough job. Aside from the usual engine upgrades, it seems the next installment of the series will i... Read More

Nintendo showed off many games for their 3DS today in a video- Mario Kart 3DS, Mario 3DS (which is a 3D 2D platformer), Kid Icarus, Luigi's mansion. Many more will be shown. More info as it comes. ... Read More

For those of you looking forward to either the Star Fox 64 remake or the next installment in the Mario Kart series then a recent piece of info coming from one  Shigeru Miyamoto, at a French press e... Read More

[HTML1] The new Mario Kart 3DS video has everything we would expect in a Mario Kart video. Getting inked, Goombasm banana peels, boulders, drifting, boosting, boulders and of course, crazy karts. ... Read More