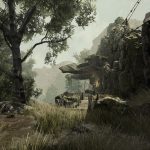 Check out how two scenes from the remaster compare to the remake releasing on September 2nd for PS5 and later for PC.

Player First Games has also confirmed that not all content in Season 1 will drop on the same day but "spread through the life of the Season."