Though it is generally considered a cult classic, the Persona series has gone from strength to strength. Though early entries in the series failed to garner much acclaim outside of Japan, it seems tha... Read More 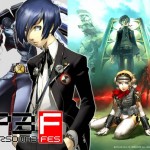