The Mistland updates, featuring the titular new biome, is out now for all Valheim players. Check out the complete details and patch notes.

A new teaser seems to hint at the legendary duo making a comeback in the sequel, despite it taking place 100 years later.

Over a decade since its initial announcement, the medieval sandbox title is finally available for consoles and PC worldwide.

Players who log in from October 24th to November 7th can claim free customization items in the Haunted Nights Castle DLC pack.

Update v1.0 releases on the same day with balance changes and new content. The developer also promises "a lot more" surprises for post-launch. 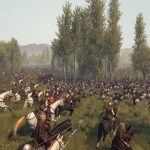 First announced in 2012, TaleWorlds Entertainment's medieval sandbox title has been in Steam Early Access since March 2020.

Stunlock Studios is focused on making the survival action RPG "the best it can be for PC," but is aware of the interest in console ports.

The biggest update for the survival crafting title is now available with new locations, items, enemies, and the final story chapter.