Dying Light 2 Stay Human’s First Expansion Will be Gladiator-Themed and Story-Driven, According to Leak

A dataminer seems to have discovered files that confirm various story and gameplay details for the action RPG's first expansion.

Dismember and decapitate foes to earn a new Cutting Edge Axe, or work with the community to cut off 3 million limbs and earn the Nightrunner Outfit.

The Nightrunner's Claws and Elite Nightrunner outfit are unlocked by hunting new Special Infected, completing bounties and ranking up.

Work with Harper, a former Nightrunner, and take down Special Infected to earn new high-end weapons, outfits, and consumables.

"They are connected to what’s happening in the city and start in the city of Villedor, it’s all broadly the same area," says lead designer Tymon Smektala.

Photo Mode is releasing in June along with "Chapter 1: In the Footsteps of a Nightrunner" which adds new enemies, missions, bounties and more.

A bug which caused players to wind up in the Prologue area, even after clearing it, has also been fixed. The hotfix will go live for Xbox platforms soon.

This will give players access to Dying Light: The Following, as well as four DLC packs that will add new content, skins, weapons, and more.

The newest DLC pack, which has now gone live, brings new weapons, a new outfit, and a new buggy for players to use. 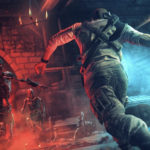 Dying Light 2 Stay Human's latest update added a New Game Plus mode, and Techland has now released a new trailer for the same.

Carry over progress into a new playthrough with tougher encounters, Platinum objectives for Parkour Challenges, Legendary Weapons and more.

30 new Inhibitors are being added for more health and stamina upgrades along with a new quest and Platinum Medals for Parkour Challenges.