Archive For us ps store Tag 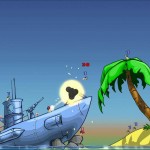 Team17 Sale on US PSN Store

Sony has released info on the next US PS Store update, and players this time will be treated with everything from God of War and Bulletstorm and FIFA to PES and From Dust and much more. The full lis... Read More

It has been revealed by Sony themselves that North American owners of PS3 will be treated to 7 new demos releasing this week for the PS Store, one of them being confirmed as Enslaved: Odyssey to the... Read More