Does this JRPG deliver? 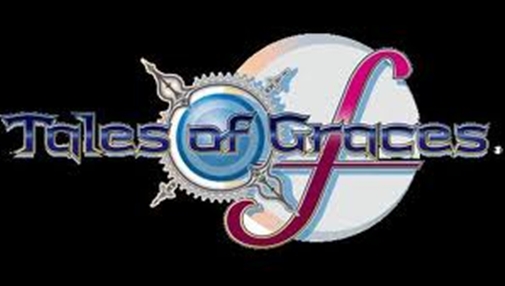 The intro hits you straight in the face, it looks like a Japanese anime, with a very slick visual presentation. You immediately mute your television because the most cringe-inducing pop song is layered over the on-screen action and you are scared of your girlfriend walking in and thinking you are a tool. The thing is Tales of Graces F is very immature, which is ironic considering the story is at its heart about a young boy becoming a man and assuming responsibility.

Some people may like the games innocence, but it is caught in an identity crisis. You see TOG has a pretty complex and deep fighting system, and most of its intricacies are taught to you by blink-and-you’ll-miss-it dialogue boxes at the end of your first 100  or so battles. So if the game was trying to appeal to a younger audience why make the mechanics so deep and vague?

You start as a young boy called Asbel, who is the heir to the lordship of his hometown Lhant. Asbel is the elder sibling to a younger brother called Hubert, the latter is a coward and the former is brave, borderlining stupidity. The pair take a trip into the woods, where they find an amnesiac girl laid among the flowers near the edge of a cliff. The young prince comes to visit from the capital, and things suddenly take a turn for the worse for the young siblings. Your character becomes an adult after what can only be described as a lengthy tutorial; adulthood promotes you from wooden swords to full-fledged steel, which is much more satisfying in battle. 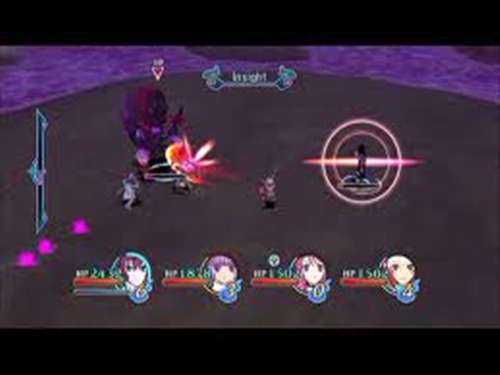 This is about as exciting as it gets.

Battles are initiated by walking into monsters in the field, or naturally if they make contact with you.  This is a much less frustrating system than the random battles of yesteryear. The aforementioned combat system is quite satisfying once you discover its intricacies: you advance by pushing the left stick forward, you retreat by pulling it back, you attack with X, holding square brings up your guard; whilst guarding you build up CC which are basically action points. When you are holding guard you can use the left stick to evade in any direction; you must evade in different directions to avoid horizontal and vertical strikes.

As the game progresses the combat gets deeper and you unlock “B artes” where you draw your sword and land damaging strikes with the circle button. You can mostly rely on your allies to take care of the healing, but in a sticky situation you can also use items manually. Your “artes” are unlocked by assigning “titles” to your character; each “title” has a set amount of learnable “artes” and as you gain experience in battle these are unlocked. 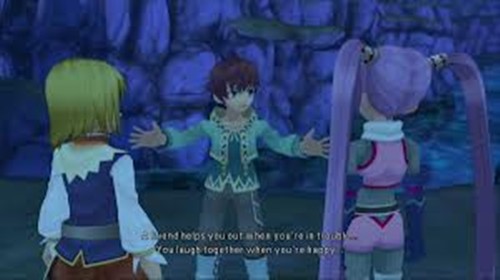 In-engine cinematics suffer from bad character animation, and the game would have benefitted from sticking to the anime sequences.

Outside of combat you will be mostly running around and talking to people, or spending Gald (read gold) in the shops. You will walk into every accessible house to see if the occupants have any spare meat in their cutlery drawers, and the tenants will stare at you with glassy-expressionless faces and repeat the same line of dialogue at you ad-infinitum.

The art style is quite pleasant, mainly because it is extremely colourful, which is a rarity. Some of the visuals don’t hold up very well though; the sea in particular looking very bland compared to the amazing water effects we see in most modern titles. Also there are some pop-in issues, I think this is the first game where I have experienced cow pop-in; two cows in front of me suddenly becoming six cows after taking a couple of steps. The camera is not controllable, but it is not exactly fixed and it does its best to keep your character in the centre of the screen.

When you encounter enemies in the field they may look like a solitary enemy, but when the battle starts they may be flanked by two intimidating lettuces; much like when travelling alone, only for your companions to appear in the next cinematic. I know this is a small detail, but this is something Final Fantasy 8 got right two generations ago. There is actually a section in the game where you are getting chased by a giant mechanical spider, nostalgia was all like hells yeah this is like FF8, but in retrospect FF8 did the scene much better.

Another little niggle I had in the game was that when you are in a town the map has no objective marker, in my opinion this was an intentional design decision to artificially extend the length of the game. It is annoying and detrimental to the experience as you run around a town speaking to everyone, all the while being force-fed the awful soundtrack.

I used to be a big fan of the Japanese Role Playing Game, but anyone hoping this is the game to take them back to a time when spikey hair was en-vogue in a game will most likely leave with their mouth tasting like a Chocobos behind. For the hardcore JRPG fan there is probably a lot to love, but for anyone else beware – the game is a dinosaur and if FF8 was a T-Rex this would be its breakfast.

Final Verdict:
MEDIOCRE
For the hardcore JRPG fan there is probably a lot to love, but for anyone else beware - the game is a dinosaur and if FF8 was a T-Rex this would be its breakfast.
A copy of this game was provided by Developer/Publisher/Distributor/PR Agency for review purposes. Click here to know more about our Reviews Policy.