The Tales series has been growing in popularity for a good while now, not just in their homeland of Japan, but also in the west, where it’s become so popular that publisher Bandai Namco have committed to being more consistent with their otherwise patchy track record with localization.

So of course, as more and more new fans come into the fold, it’s as good a time as any to try and revive some of the older, less popular entries into the franchise, and expose them to a broader audience. Tales of Hearts R on PS Vita is just that- it is a remake of a Tales of game on the Nintendo DS, which was never too popular in Japan to begin with, and was never even brought over to the west.

It’s important to keep that in mind when you go into it- the Tales series has been making some great strides lately with memorable games, but those are all more recent and modern games. Hearts represents a period of slump for the franchise, when the games it was putting out weren’t going down well with anybody, not even its traditional Japanese audience. So this is a game that wasn’t all that well received when it was released to its intended audience, to begin with. Now, in 2014, with more even more modern (and better) standards to judge it against, and with an audience that was never its intended demographic to begin with, assessments of Tales of Hearts R can be brutal.

It’s not that it’s a bad game. It’s just not a good one either. It just is. 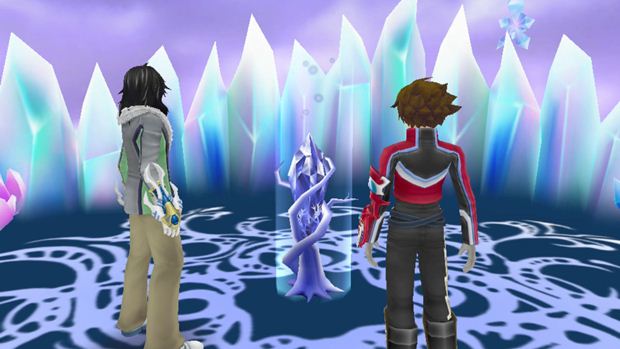 "In 2014, with more even more modern (and better) standards to judge it against, and with an audience that was never its intended demographic to begin with, assessments of Tales of Hearts R can be brutal. It's not that it's a bad game. It's just not a good one either. It just is."

A large part of my apathy towards Tales of Hearts R (much like my apathy towards Dawn of a New World or Tales of Graces F) comes from its awful characters and story, all of which rely on tired tropes, cliches, and pandering humor to cover up for what is just terrible writing all around. The story is laughable, and comes off as a worse riff on something we have already seen in Ni no Kuni– a girl has her spiria (think of it as the manifestation of her spirit) shattered, and she loses her ‘heart’ and her ability to emote as a result. It’s on Kor, the protagonist, to recover shards of her heart to restore her feelings. It’s an all around bad plot with an uninteresting premise, extremely low stakes, and a predictable resolution, meaning that the arc can never keep you interested or compelled.

The characters just make it worse. Tales of Hearts R is like Japanese anime cliche 101, featuring characters that fall into groan inducingly predictable archetypes- a protective older brother, a good Samaritan protagonist, an evil witch, a wise old man who acts as a mentor, a girl who needs rescuing… if the story is predictable, the characters are even more so, and where the best Tales games in the past have benefitted from some genuinely fun and compelling casts that have either enhanced the story or covered for it, Hearts R begins to try the player’s patience by confronting them repeatedly with characters you don’t just not care for, but also actively dislike.

It doesn’t help that the writing, as mentioned above, is terrible. The basic dialog is voice acted in Japanese, and since I don’t know Japanese, it’s hard for me to tell whether the performances are good or bad, but the writing that shows up in the subtitles is awful. Bad characterization and story can sometimes still be redeemed by sharp writing, but Tales of Hearts R fails even there, with some cringe inducing writing and attempts at humor that try too hard to be funny, and end up falling flat on their face. Whether it’s because the translation is bungled, or because the original script to begin with was bad, but Tales of Hearts R’s writing completes its trifecta of bad storytelling. 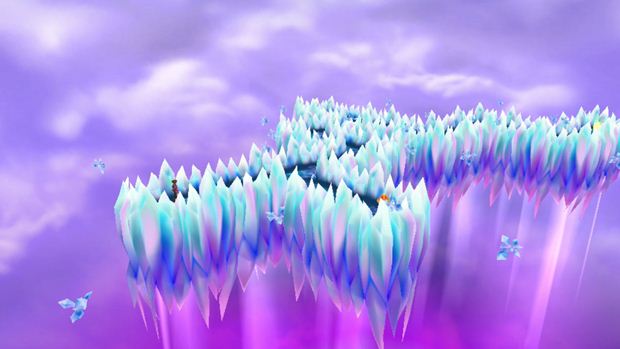 The actual presentation won’t likely change your mind either. The actual in game graphics are simplistic and unspectacular, betraying their DS game roots, but they look sharp and defined enough that you don’t mind them. Surprisingly enough, the issues come from the anime cutscenes that intersperse the game in Tales of Hearts R. Surprising, because they are actually very well produced, and among the standouts of the entire package.

So what is the issue, you ask? The issue is that the cutscenes appear in the aspect ratio of the original DS screen, while the game plays in the widescreen format native to the Vita. Adding more confusion to the mix, some cutscenes actually seem to be optimized for the Vita’s widescreen format and run in that, while others do not. It’s jarring when there are so many transitions, and it makes it seem like Bandai Namco started work on optimizing the game for the Vita’s screen, but then simply got bored halfway through and gave up. It’s a shame too, because, as mentioned above, the cutscenes are actually very well done.

For all that Tales of Hearts R does wrong, however, I do have to commend it on what it does right, and what makes it enough to almost warrant a purchase all by itself, and which single handedly redeems the package. If you’re a Tales fan, you know what I’m talking about, you knew it was coming- I’m talking about the battle system. The battle system in Tales games are always the gem of the package, the centerpiece, the reason this series has grown to have the kind of following that it does have, and Hearts R is no different.

To be clear, this isn’t the best battle system the series has seen- as said above, the game was originally a DS game, and concessions were probably made to accommodate it all on a handheld. It’s also riddled with random encounters, which tends to drag the pacing a fair bit. But in spite of all of that, it’s deep, it’s compelling, and it’s fun. It lacks some of the enhancements that newer games in the series have, but it comes with its own hook, the chase system, which basically lets you chain a combo of overpowered attacks on an enemy once you stun it defenseless. Coupled with character customization, which lets you have almost full control over your builds, the battle system is actually one of the standouts of the package, and it is helped by how quick everything moves, rather than the slogging pace that most JRPG battles are known for. 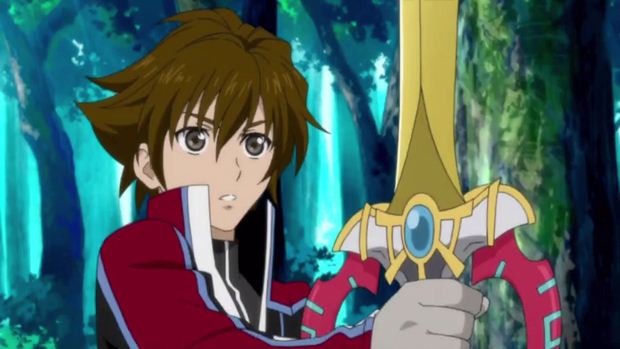 "Coupled with character customization, which lets you have almost full control over your builds, the battle system is actually one of the standouts of the package, and it is helped by how quick everything moves, rather than the slogging pace that most JRPG battles are known for."

The dungeons these battles take place in are unremarkable and uninteresting. The backdrop changes, but the design is simplistic, and almost banal. Thankfully, the game, whether by design or by mistake, features very short dungeons that never outstay their welcome, so this failing never becomes a fatal flaw.

A special shout out must also be given to the game’s soundtrack. Tales games usually have great scores, and Hearts R is no exception. The music is not exceptional, and is actually fairly typical of the series, but it’s great. The voice work is a bit of an issue, as I said above, but the music is great, and if you will be playing Tales of Hearts R, I recommend that you do so with headphones on.

Ultimately, the entire package comes off as being just… inoffensive. Yes, the characterization and the story are bad, the writing is awful, and the game feels unfinished due to transitions. But the music is great, the battle system is fast and fun, and very compelling all on its own, and the character customization is more full featured than many other games in the genre. The good parts tend to cancel out the bad ones, the bad parts the good ones. If you were to ask me how I feel about Tales of Hearts R, my response would be very ambivalent.

The game just… is. It’s there. You can play it and enjoy it in the moment, but nothing will stick out in memory for being too good or too bad. For many content starved Vita owners, that will be enough. For many Tales fans, just the battle system will be worth the price of admission. For many fans of JRPGs, the game’s flaws will be something they are used to dealing with on a routine basis, so the game will be worth it. For others, it will not be something they will be looking at.

And that is Tales of Hearts R in a nutshell- your mileage with it may vary, and what you get out of it depends entirely on what you took into it to begin with.

The battle system is really great, and very quick as well; the soundtrack is great; the character customization is deep and fleshed out; the game moves quick, and doesn't let you linger in its unremarkable dungeons; the cutscenes are exceptionally well done

The story is bad, the characters are awful, the writing is terrible; the graphics are simplistic and betray their DS game roots; the game often makes the transition from DS screen aspect ratio to Vita's widescreen aspect ratio, which is jarring

Final Verdict:
FAIR
Tales of Hearts R is not a bad game. It's just not a good one either. It just is.
A copy of this game was provided by Developer/Publisher/Distributor/PR Agency for review purposes. Click here to know more about our Reviews Policy.