The tenth anniversary of the Gamecube and PS2 classic gets celebrated in style. 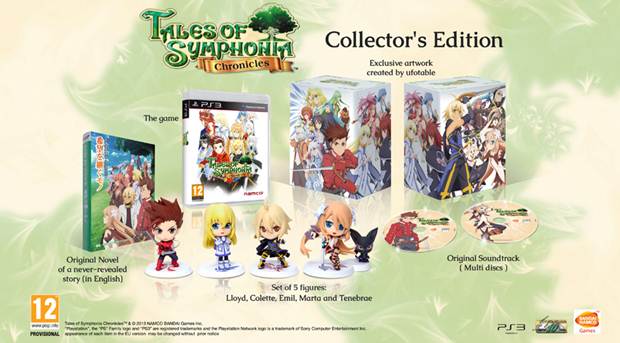 Tales of Symphonia Chronicles, the PlayStation 3 exclusive re-release of Namco Bandai’s most beloved Tales of game, as well as its much less lauded sequel, is getting a Collector’s Edition in Europe, that releases February 28 (which is also when the game releases there, incidentally).

The Collector’s Edition comes packed with the following:

“In celebration of the Tales of Symphonia 10th Anniversary, we wanted to mark the occasion! Bringing back this epic and oneiric adventure was the first step to please fans and newcomers alike” said Mathieu Piau, EMEA Marketing Director for Namco Bandai Games Europe. “The second step was to offer to all our beloved Tales Of fans the Collector’s Edition they deserve, with some fantastic collectible content to dive further into the Tales of universe!”

Tales of Symphonia Chronicles releases next year. Next year also sees the western release of another major Tales of game, Tales of Xillia 2, the sequel to this year’s Tales of Xillia. Stay tuned to GamingBolt for more coverage on the titles.

Update: Tales of Symphonia Chronicles will be released on February 25th, 2013 in North America.