Platinum Games may have built a reputation for developing some excellent titles in recent years, but it’s unlikely its new Teenage Mutant Ninja Turtles game will be remembered with the same fondness as Bayonetta, Vanquish or even the more recent Transformers: Devastation.

Although the launch of Mutants In Manhattan coincides with the big screen release of the new TMNT movie, the game instead follows the style and tone of the popular kids cartoon series.

Clearly aimed at a younger audience, it’s easy to pick up and play thanks to the simple-to-grasp controls. A couple of buttons to attack, another to jump, dodge, parry and throw ninja stars. The D-pad lets you switch between turtles – thus accessing their special abilities and power ups. It also provides access to a selection of commands that let you direct your green-skinned brothers in battle. 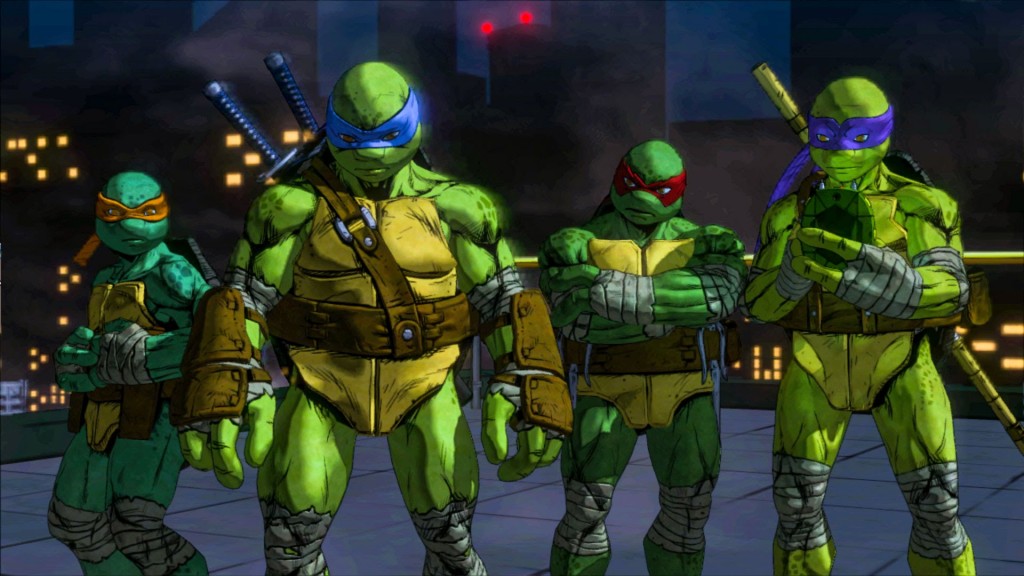 "You can play alone or with a few friends online – but sadly, it’s a real oversight that there’s no local co-op option."

Sadly, most of these controls and abilities are rarely required due to the overly simplistic gameplay. On normal difficulty, Mutants In Manhattan takes only a few hours to complete – and you’ll have pretty much seen all there is on offer within the first fifteen minutes. It’s hugely repetitive too, with each of the 10 stages (including a brief tutorial level), following the exact same format.

This third person hack and slash affair sees Leo, Donnie, Mikey and Raph in all their cel-shaded glory, traversing rooftops, navigating sewers and investigating the New York streets to uncover the dastardly plans of Krang and Shredder.

You can play alone or with a few friends online – but sadly, it’s a real oversight that there’s no local co-op option. Solo play teams you up with three AI turtles who help take the strain when the enemies start flooding in and the odds are stacked against you – but it’s easily more fun when slicing and dicing with human teammates. Gameplay-wise, it all feels reminiscent of the old arcade game that guzzled my coins back in the day, so that’s no bad thing.

The visuals and animations are decent enough, and the cut scenes are nicely done too – capturing the show’s trademark tone and humour. Some of the environments are a little on the drab side though; the grey Manhattan streets, and dark sewers and subways looking dull and unimaginative. In contrast, each attack, sword wipe, special move and combo floods the screen with a burst of colour – which can make it tricky to see everything that’s going on in the thick of the action when loads of enemies are onscreen. 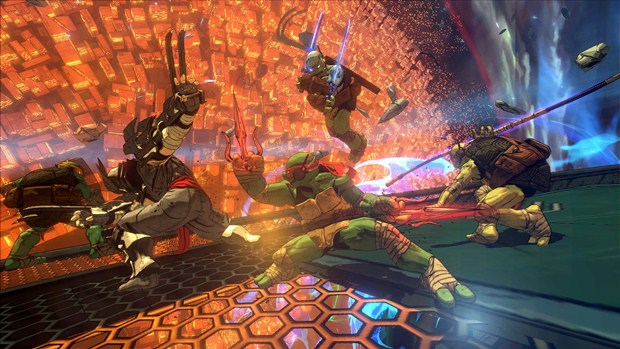 "On paper, this is a game that holds so much promise, especially with Platinum behind it. But it all gets dull too quickly."

An element of strategy and customisation has been added through a simple shop facility where you can cash in points accrued from collecting the many green orbs that are dotted about the maps. These can be traded for weapons and abilities to make your turtles even more deadly. There are some cool upgrades among them too – particularly the freeze bombs, plasma launcher and missile turrets. Energy boosting pizzas and drinks also prove handy. The nature of the gameplay, however, and reliance on button mashing means these upgrades are not really necessary and prove to be a bit of a missed opportunity.

Levels are split into a series of surprisingly short sections, which demand either an area be cleared of enemies, that bombs are defused or objects retrieved. Along the way, the turtles come face to face with hordes of foot soldiers and other cronies – most of whom suffer from weak AI and pose little real threat. Despite the ability to parry and dodge, it’s unlikely you’ll ever need to do anything but tap the light and heavy attacks to see the bad guys off. A bar at the top of the screen fills as you progress through the level, indicating how close you are to reaching the boss battle.

The boss fights really are the saving grace, reuniting us with some of the franchise’s most memorable characters. Mutants In Manhattan pits you against the likes of Bebop, Rocksteady, Karai, Armaggon, Slash and Wingnut – each having a distinct attacking pattern and level of aggression. These segments take place in an enclosed arena and are really the only occasion where you’ll need to call on your special abilities. Each boss fight proves reasonably challenging, largely owing to their multiple health bars that need to be fully depleted. Succeed and your performance for the level is graded – I guess offering some replayability factor should you want to beat your score.

On paper, this is a game that holds so much promise, especially with Platinum behind it. But it all gets dull too quickly. Unless you’re on the tougher settings, it doesn’t pose too much of a challenge – on normal, the first time I died was on the sixth level when an airborne Wingnut kept spamming me with a spinning attack. 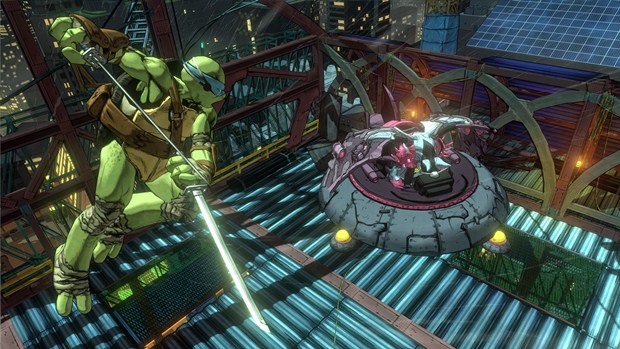 "This is a game aimed at a younger audience that is extremely easy to pick up and play, yet it’s simplicity, weak enemy AI and lack of any real challenge means it’s unlikely you’ll be playing this in months to come."

Also, a few more cameos would have been nice – Splinter and April make an appearance but it would have been great if Casey Jones, Metalhead, Fishface, Leatherhead or Dogpound, had shown up too.

Probably my biggest bugbear is the lack of any real variety between turtles. Everyone’s got a favourite, right? Mine’s always been Raphael – the angry one with the red bandana and trademark twin sai to skewer the bad guys. But I quickly found that there’s actually very little that differentiates them in-game. You’d have thought that Donnie should have a longer reach thanks to his bo staff – or owing to his penchant for technology, he should at least have access to loads more gadgets. Perhaps the smaller Mikey should be more agile and awesome for close quarters combat with his nunchucks? Well, no. Whichever turtle you pick has little effect on the gameplay, and that’s a real shame.

This is a game aimed at a younger audience that is extremely easy to pick up and play, yet it’s simplicity, weak enemy AI and lack of any real challenge means it’s unlikely you’ll be playing this in the months to come.

Faithful to the animated series and captures the show’s quirkiness and humour. Good fun with friends.

One of Platinum Games’ more disappointing offerings – too short and too simplistic.

A copy of this game was provided by developer/publisher for review purposes. Click here to know more about our Reviews Policy.
Tagged With: activision, pc, Platinum Games, ps3, ps4, Teenage Mutant Ninja Turtles: Mutants in Manhattan, xbox 360, Xbox One