I would recommend Terraria to anyone if they like sandbox games.

erraria is a unique 2D side scrolling sandbox platforming game that was inspired by Minecraft. For those who played Minecraft can easily become friends with Terraria since the concept is for the most part the same. There is no end goal to the game other than to live, create, survive and just have fun.

Terraria came out on the PC in May 2011. Terraria ended up being quite successful and now it is time for the console fans to experience what PC gamers played 2 years ago. How well does Terraria fit the console controls, feel and playability?

In this review, I will cover the game’s strengths, weaknesses, presentation and overall verdict. However, this time I will also be doing a trophy section of the review for those who enjoy trophy hunting/achievements on their consoles.

I will be giving an overall feel and difficulty of the trophies, the trophies DO NOT affect the review score, and it is just a bonus for the readers. As always, I like to start my reviews with presentations, so let us hop right into that.

"Going with 16-bit pixelated graphics will definitely get everyone's attention and people will start wondering what is so special about this game. "

Terraria is presented as a 16-bit 2D side-scrolling platformer sandbox game. If you enjoy good pixel graphics, nostalgic classical old-school video game music and that feel of engagement and appreciation of pixel characters then Terraria will easily satisfy your needs. The music fits the game perfectly; there are different themes of music depending on where you are in the game world.

Music changes as you go deeper underground or if you are climbing your way back up to the ground level areas and upper levels. The tunes themselves are quite catchy and put a smile on my face because it fits the game’s play style perfectly. I have no complains for the soundtrack part of the game or even its sound effects due to the simplicity of the game, it just works really well. 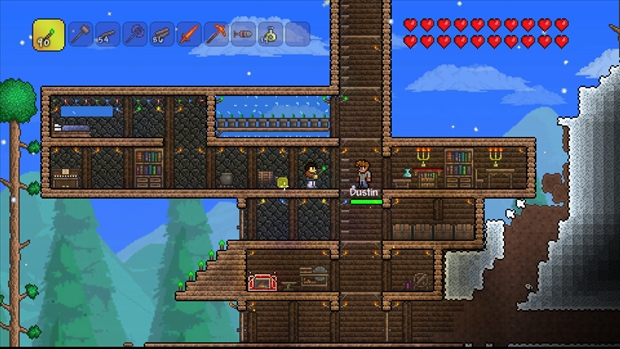 The graphics in Terraria are reminiscent of 16-bit games. People mind be wondering why we still see 16-bit games these but the matter of fact is Terraria is a type of game that proves graphics doesn’t always make a game and the gameplay can still be great and addicting. Terraria is not trying to be a current generation experience, instead it is trying to create innovation and be unique from everything else that there is on the market. Going with 16-bit pixelated graphics will definitely get everyone’s attention and people will start wondering what is so special about this game. If you love platforming, cool boss fights and addicting gameplay then Terraria is for you.

Overall, I like Terraria’s look, feel and music. Everything comes together in this game, from enemy designs, gameplay style, catchy music and 16-bit graphics make this a perfect nostalgic package for those who enjoy long hours of creativity and fun.

How does Terraria play exactly you may ask? Well, the game may look very simple but it is actually quite in-depth and there is a ton of stuff to do. However, the core of the game is based on crafting, exploring underground dungeons, killing nasty bosses, building your own house and of course just exploring the random generated world. This is the type of a game where you will need many hours in a day to actually accomplish something.

"My only gripe with the crafting system is the UI; it is a bit cumbersome and hard to navigate through especially on a console. "

The game has different difficulty levels, you can even play in hardcore mode that activates permanent death for your character. The start of the game is quite simple, you make a custom character by choosing gender, clothing,  skin, hair colors and even hairstyles. Once you have made your character you will choose what kind of a world size you want the game to generate. Terraria allows you to have multiple characters and more than one world, if you truly enjoy this game then there are plenty of ways of experiencing a different layout every-time. Overall, the customization options are quite nice for a 16-bit game and I do not really have any problems with it. 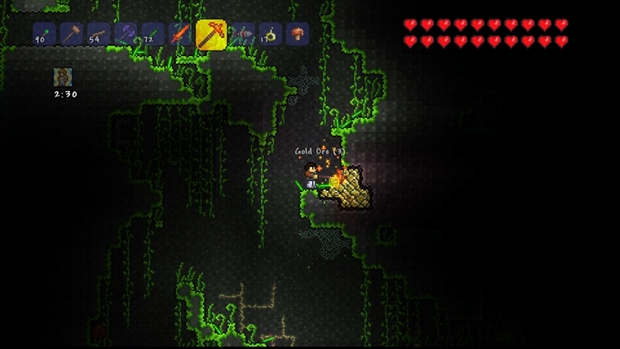 The crafting system is the core of the game. At the start of the game, your character is equipped with pick-axe, chopping axe and a basic sword to protect yourself from the game’s baddies as you explore the underground world. Right at the start of the game, you can start digging tunnels into the underground to find ores and stones. There are a ton of crafting materials and it would be impossible for me to list them all here.

The chopping axe allows you to chop down tress and gather wood. As you progress through the game and encounter creatures underground, you can collect even more materials to start crafting rare items such as armor, weapons and special axes that are used to mine specific types of ore.

Eventually you will be able to summon horrific bosses, defeating these bosses will reward you with more drops and basic progression. As you gather materials, you will start getting full on your inventory, however, you can create chests to store your items.  My only gripe with the crafting system is the UI; it is a bit cumbersome and hard to navigate through especially on a console. It works, but I believe it could have been designed much better for the controller since consoles do not use mouse like PCs do.

In Terraria, players can also build houses for themselves to live in. You start by building blocks, walls and then doors. You can decorate your house with different kind of items such as torches, armor statues and a ton of other stuff. You can build your house in any way you want, whether you want it to have multiple floors with many exits or just a small shelter.

As the player progress through the game and continues expanding their house, NPC’s will start moving in. These unique NPC’s can sell you special items for crafting and they are part of the game’s overall progression. However, it takes a while before you are able to get all the NPCs to join you. 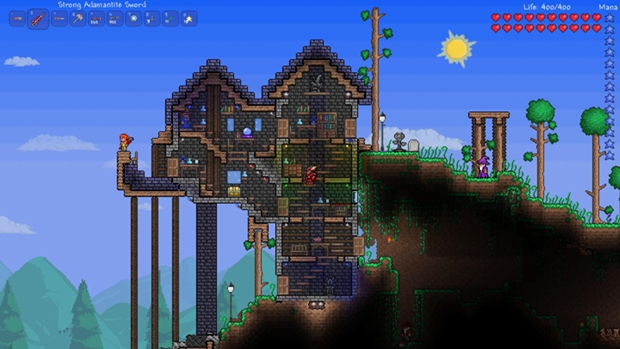 Building a house is fun and it is a part of your progression because it is where you will be spending most of the nights in the game. The game has a day and night cycle as you play. During the night it is very dangerous to be outside because more monsters start to spawn and they try to find and kill you. This is where the survival part comes in the game. If the player decides to venture off in the night then he or she has to be well prepared with weapons, ammo (for bows) and health restoration items such as potions and so on. At night, you can also encounter special monsters that normally never appear during the day in certain areas.

"Terraria is a rare-gem, its unique, entertaining and just really a good game at its core. "

Terraria even has co-op multiplayer and player PvP. I found co-op multiplayer enjoyable, however, the only problem I had with the co-op is the fact that you cannot play with random people; you are only allowed to play with friends. To be honest though, it is not that a big of a deal to me, most people will play co-op with their friends to begin with rather than some random person, but having the option would still be nice. PvP can get fun; you can goof with your friends and trash talk. PvP in the game is not meant to be taken seriously, but it is there if you want to mess around and have a fun time. 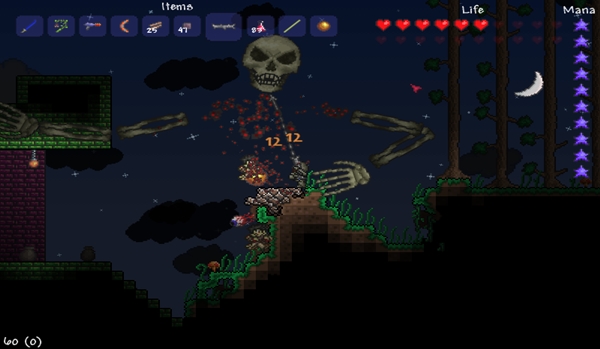 Trophies in Terraria are quite good. They range from starting and finishing a tutorial, surviving your first night and all the way to beating bosses and collecting vanity items such as pets and clothing. If you manage to get all of the NPCs to move in to your house you will get a bronze trophy. Unlocking hard mode difficulty in the game will reward you with a golden trophy.

What I like about Terraria’s trophy list is that the trophies make you play the game to its fullest exploration aspect. The trophies are not too difficult or too easy, but instead they are rather time consuming. However, time-consuming trophies make perfect sense for this type of game because Terraria itself is time consuming in terms of gameplay and rewards. If you are a trophy hunter, enjoy 16-bit games that actually have depth and good presentation then you will be happy with the trophy list that this game has to offer.

Overall, Terraria can be a very addicting game. The game rewards those who have a lot of patience, enjoy exploration, survival aspects and creating. This game is not for everyone, not every person will like and appreciate Terraria for what it is and what it is trying to achieve. The only issue this game has is the cumbersome crafting UI which can turn some people off.

However, I personally enjoyed it and I actually cannot wait to go back to play it at a slow pace and enjoy my time in the game and collect all the trophies. I think Terraria is a rare-gem, its unique, entertaining and just really a good game at its core that I would recommend to anyone if they enjoyed Minecraft or like sandbox games.

Game has a lot of depth, great exploration aspect, digging tunnels and then going back up is fun and engaging, day/night cycle add a good dynamic feel to the game, building your own place is awesome.

Can't play co-op with random people, crafting UI is cumbersome and can be hard to navigate on the console, game is not for everyone.

Final Verdict:
EDITOR’S CHOICE
Terraria is an awesome sandbox game. There is a ton of stuff to do, the game is quite deep with its crafting and exploration aspects. If you have not played the PC version then this is the great time to pick it up for your consoles instead.
A copy of this game was provided by Developer/Publisher/Distributor/PR Agency for review purposes. Click here to know more about our Reviews Policy.