Test Drive: Ferrari Racing Legends is the latest release by Rombax Games into the Test Drive franchise dating back to 1987. I tend to find most driving games fall into 2 categories; Arcade, where driving tends to be non-realistic with heavy drifting, boost/turbo with insane speeds. The other category, which is where this game falls into, is Simulation where the game tries to be as realistic to real world driving experiences as possible. In their own rights, if done well they can be fun and exciting, however in a sea of racing games, TD:FRL does not stand out as a top contender. If anything this game just plays it safe. 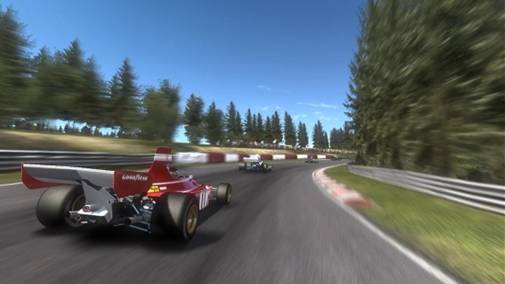 If the main focus of this game was to have a great representation of all Ferrari vehicles, then job well done. All exteriors and interiors look fantastic. You can even choose between 33 colors in quick matches. As with any game each vehicle drives differently, but there’s no stats given on any car other than speed. In a game where it’s all about the cars, it would have also been nice to have a feature where you buy the cars and put them in a garage. The closest form to this is that you can select a vehicle and then spin around it in the showcase mode. It’s limited though and you can’t change the distance of the camera, open the doors, or even read some cool info about the selected vehicle. Profile stats only mention the car driven the most outside of career mode, as well as overall times for driving, including career, but only races that have been won. If you are disqualified, came in last or just didn’t meet the objective of the race, those times are not included, making you feel like you didn’t play much of the game.

Multiplayer equates to racing with friends or other online players only, but offers nothing more than what is already offered through career mode. You can create a match online or join one. I felt overall the options were rather limited. Although I wasn’t completely interested in driving a Ferrari in the snow, it wasn’t an option. I would have settled for rain, but that wasn’t an option for weather either. The only options for weather were sunny or overcast, morning, noon or evening. Now I know most Ferrari owners wouldn’t take their cars out in bad conditions, but why not in a game? 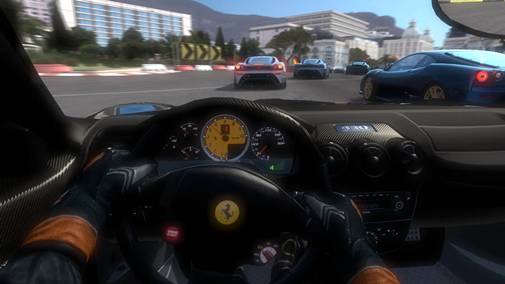 The meat of this game comes down to the career mode which is spilt into golden, silver and modern age and there are over 50 races per mode except modern, where it’s over 100. So you get your money’s worth there. I particularly liked when races in the golden age started in black and white, grainy, scratched film and faded into color, as well as the silver age, where races started in sepia tone to color. As with the cars, the tracks look good too and the art team really made everything visually appealing, if not static. The story for one race was that I was driving a prototype for a private party, yet the track had the stands full and people around the corners holding national flags. The gameplay also seems lack luster at best.

The control scheme is so generic there isn’t even a tutorial level to learn the game mechanics. Although we don’t need our hand held in every game it also felt like there was no real thought into how to improve the feel of the game. There are only so many times you can race around the same few tracks and have fun. The AI/other vehicles are unintelligent and you need to avoid them like the plague. If they tap you, you will lose complete control of your vehicle and may force you to use the dreaded reverse gear. It takes so long to get into reverse, you might as well restart the race. I also found that auto shifting would linger on red lines far too long and hinder your success for good lap times.

Grass is far worse than the AI and need to be avoided even more so. Not only because of the certainty of losing control, but also because if you cut a corner or crash the game thinks you’re cheating. If this happens you get penalized by disqualifying the track time, which could suck if you’re only on the course to complete track times. If you cut a corner or go off track 3 times, you get disqualified from the race. This could mean that if you get thrown from the track by AI, you can be disqualified because the game thinks you’re cutting a corner. It seemed rather harsh, but was nowhere close to the epic fail of ending a qualifying run.

In a qualifying race, you have to complete a lap in under a designated time. You are offered ample laps to complete the task and usually I found myself completing the time in either the first or second lap. Once you’ve completed the time the announcer will tell you to come back to the pits, although he really means you have to go another lap since the entrance to the pit is before the finish line. If you turn around and head back to the pits, you have 5 seconds to turn around and go the correct direction. If you fail to turn around, you get disqualified, even if you beat the time given for the lap. 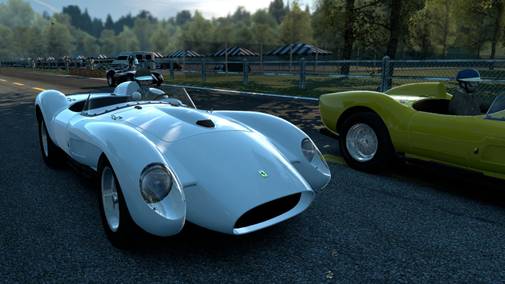 Considering half the races are qualifying laps, you’ll be wasting a lot of time because you can’t just end the race after completing the designated time. You also can’t just end the race from the menu. The menu only gives the option during the qualifying run to resume or quit. After the race the menu is set to restart the race, unless you change it to go to the next race. Each race is also prefaced with a wall of text. If you have enough time to read it all, they offer a cool story, but again with no frills. There could easily have been a cut scene or something interesting to push a story instead of a wall of text. It just felt like the game was unpolished, or the developers weren’t quite sure if the game should have been a DLC or full blown game.

Overall Test Drive Ferrari Legends is a good game. It’s not broken and unplayable, but the game really doesn’t offer anything that you can’t get with any other simulation. If the perk here is that you can play every Ferrari car that hasn’t been offered in other games, it doesn’t feel worth it. It just feels like the same race with a different skin on you vehicle which is nothing more than a DLC. The game is a bare bones driving simulation that offers no real incentives for completion, and at best is repetitive with solely focusing on racing on closed circuits. If you’re into simulation racing and Ferraris, this is your game.

Final Verdict:
FAIR
In a sea of simulation racing games, Ferrari Racing Legends barely qualifies the lap.
A copy of this game was provided by Developer/Publisher/Distributor/PR Agency for review purposes. Click here to know more about our Reviews Policy.