Posted By Jordan Garland | On 25th, Jun. 2012 Under Previews | Follow This Author @MostUnfurrowed

I used to firmly hold the belief that Batman was far and away the worst super hero; a rich bloke who’d watched too many Bond films and vampire novels; a poor-man’s rich-man’s Iron Man. Then along came Arkham Asylum and Arkham City, giving that view a swift roundhouse kick in the face and hilarious sand-paper voice aside, completely changing my perception of Bats who now ranks among my all-time favourites.

The Amazing Spider-Man serves to do exactly the same thing for Spidey, the only hyphenated super hero still around, altering my view of him as a character, but certainly not in a good way. The Amazing Spider-Man, as the name suggests, is an official movie tie-in, the first since Spider-Man 3 and the less said about that the better. According to Beenox, the events which take place in the game are set after those in the film, suggesting fans may be best off watching before playing.

With a chequered history of Mac and Windows ports, The Amazing Spider-Man is Beenox’s third Spider-Man game, a universe in which they appear to have a rather hit-and-miss approach. Shattered Dimensions took an unconventional approach to Spidey and amalgamating four Spider-Men from four different universes, receiving fairly high critical acclaim, a stark contrast to Edge of Time, quite rightly laughed out of the room for being rather terrible. GamingBolt were given the opportunity to get handsy with The Amazing Spider-Man at Activision’s Post E3 showcase. 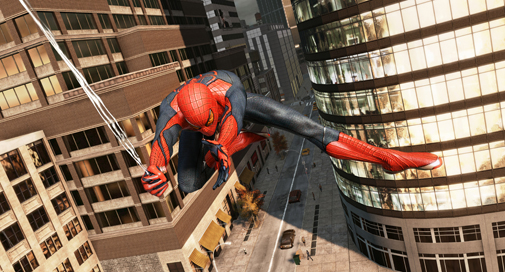 The Amazing Spider-Man has been rebuilt from the ground up, a fresh new take on Spider-Men past, returning to the endless possibilities of an open world sandbox game, traversing through the  indomitable New York skyline with nary a care in the world. Such an environment lends itself to a Spider-Man game, a closed world setting never really made much sense, but on paper you could say the same thing about Arkham Asylum.

Initially web-swinging between buildings is nothing short of exhilarating, that first leap of faith towards the streets below is a real heart-in-the-mouth moment, but the sensation quickly wears thin and within minutes web-slinging becomes almost tedious; a seemingly infinite amount of time between swings and trying to navigate this city is simply dull. Wether this is down to the inadequacies of web rush or the limp, lifelessness of Manhattan remains to be seen. The city simply doesn’t feel alive, its citizens merely inhabiting the streets for Spidey’s benefit.

HUD-less gameplay seems to be on the up in recently months, apparently allowing for greater immersion and a more ‘authentic’ experience, to which I am highly sceptical, and The Amazing Spider-Man is no exception. Beenox even explicitly stated this, but all it serves to do is high-light some of the poorer level design choices in the enclosed segments, frequently I became disorientated simply because there were no reticles, way-points or immediately accessible mini-maps as reference. 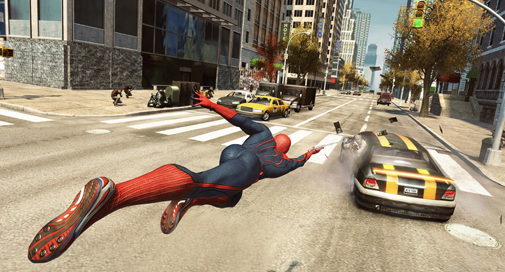 One of the more robust elements in Spidey’s repertoire is the combat, delivering a relatively solid experience, if leaving you with an overwhelming sense of deja vu. There’s no two ways about it, the combat mechanics are nigh-on identical to the Arkham games, (I’ve been informed in the comments section by Spider-Man himself that these squiggles first appeared in the comics to indicate his spider-sense) which is by no means a bad thing if delivered to the same standard. It’s solid, yes, but feels very lightweight in comparison and just lacks the fluidity that made Batman feel so very powerful.

I’m doubtful that web-head can even be saved a glossy veneer as Spider-Man aside, bland low-resolution textures are ten-a-penny, New York bereft of a personality and left looking like Coventry, even the cars look decidedly 2007.

The only real positive I can draw from by short time with Peter Parker is that for once in-game collectibles have a real-world significance, comic pages can be collected, scattered around the city like scraps of pornography at a railway siding, but what’s unique here is that each page unlocks a digital version of the original Amazing Spider-Man comics, the entire collection available to view in-game. 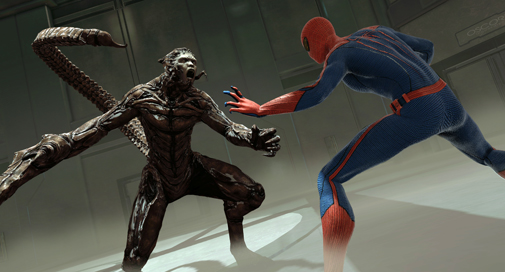 The Amazing Spider-Man is nothing short of a disappointment and at its current duration, feels limp and impotent, delivering one of the least satisfying sandbox super hero games to date. Spider-Man is starting to feel less like a formidable crime-fighting super hero and more like a aging Daddy Long Legs, aimlessly bumbling about the room before getting tangled in his own web and killing himself.