One of the more interesting games that was shown off during Microsoft’s E3 press conference was The Artful Escape, a platformer with the unusual aesthetic that sees you navigate Francis Vendetti, the nephew of a popular musical star, through a psychedelic landscape that sees music come to life, visually. The game ended up achieving rapturous acclaim, and now stands out as one of the more anticipated indie games on Microsoft’s console.

How does the team, which remains humbly small in size working on a passion project, cope with the pressure and scrutiny of so many people looking forward to their game? This, and other topics, were among the ones that we discussed with Johnny Galvatron, a former musician and the creator of the development studio Beethoven & Dinosaur, the folks working on the game. Buckle in.

The Artful Escape was one of the more standout games at Microsoft’s E3 presser, which is noteworthy given all the new announcements and other reveals. How did it feel to showcase the game on this kind of stage to the world?

In the lead up I was trying to get the teaser finished and a new iteration of the demo to show on the floor so I hadn’t given it much thought. Even on the way to the presser I was just watching LA slip by train windows. Then you’re confronted with this bastion of a stadium; press gauntlets, huge lines, blocked off streets. Suddenly you’re sitting down in a emerald laser lights and people start chanting, “PHIL! PHIL! PHIL!” and you’re sure you’ve lost your mind. It’s a spectacle. Blew my mindtank. And to see the you and your friends work displayed in that medium is surreal.

Usually when we look at music games, there’s the rhythm title like Guitar Hero, Elite Beat Agents or even Thumper. The Artful Escape seems to take music as a more tangible element to play around with. How did you come up with the concept?

Traditional music games don’t feel like playing music to me. Learning an instrument is difficult, but once you have it down a large portion of commercial, popular music isn’t difficult to play. Unless you’re reading sheet music notes aren’t flying at you; the music you play is, usually, imprinted on your brain. Playing music, I think, is most enjoyable when it’s effortless, when you feel powerful. I wanted to try and recreate that sense of power and virtuosity in the Artful Escape. 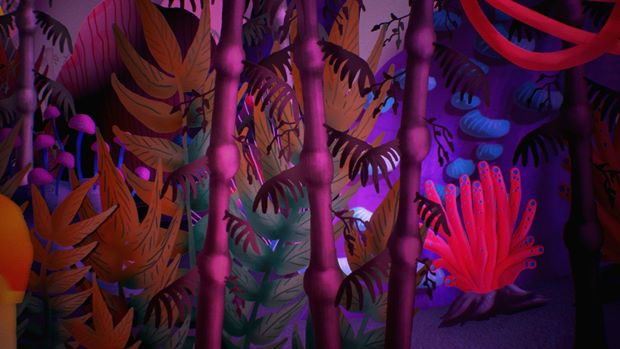 "We won’t be divulging everything about the game this early on but your guitar can move you in multiple ways, ignite the landscape and allow you to communicate with towering alien leviathans."

You cited influences like David Bowie, Steven Spielberg, Wes Anderson and so on as instrumental for the game. What did you feel was the common thread that linked these influences together for The Artful Escape?

I don’t think there’s a common thread. You draw inspiration from concepts and necessity and these starting points blend and harmonize and clash. The story draws inspiration from musicians with stage personas; Bowie, Daft Punk, Gorillaz, but the game itself is a 2.5D Platformer, and that’s where the Spielberg, Wes Anderson inspiration tangoes onto the stage. We wanted to approach the camera of the platformer in a cinematic light. We watched a ton of films with great oners and elaborate tracking shots; Wes Anderson and Spielbergio have some of the best.

The story is especially intriguing because it focuses on familial relationships but also the weight of having a famous icon as a relative. How did you weave all these complex emotions into the game?

I wouldn’t approach a story with the objective of weaving in emotional moments or themes; all that derives from the characters you devine. Give them enough complexity, give them goals and desires and fears and other characters to challenge those traits and the moments should emerge, by themselves, on the long road.

In The Artful Escape, players can use the guitar given for different purposes like making platforms. What other uses will music have and how much depends on the player’s ingenuity?

We won’t be divulging everything about the game this early on but your guitar can move you in multiple ways, ignite the landscape and allow you to communicate with towering alien leviathans. 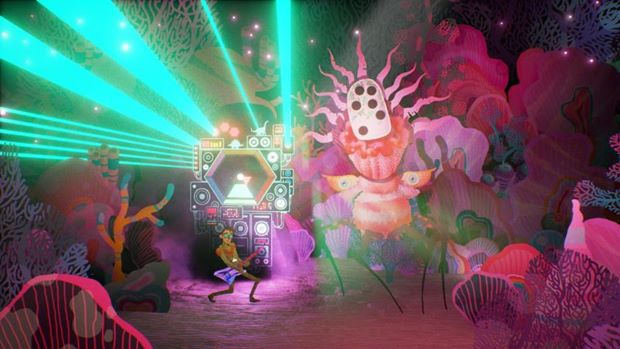 How many levels are there in the game? What kinds of bosses do players encounter?

How intuitive are the controls? What kinds of challenges have you faced when it came to level design, the placement of enemies, boss encounter design and so on?

The challenges with a game where enjoyment is derived from making the player feel virtuosic and powerful rather than difficulty is that you need to compose your levels with the correct pacing, like the dynamics of a song. Use one mechanic too long and the illusion starts to fall apart.

Can you tell us more about the ability to create one’s own soundtrack from the sound samples discovered in-game? Does this kind of discovery and eventual creativity sort of run parallel with the protagonist’s own journey of self-discovery?

This was a feature we spoke about during our Kickstarter. Now that the game has moved on from its unsuccessful Kickstarter and signed with publishers Annapurna, many aspects of the game have changed from that early vision of the Artful Escape. There are still some elements of sample playback but it plays a smaller role.

Why did you opt to make The Artful Escape a console exclusive on Xbox One?

After seeing it play at 4k on the dev kit. Can’t go back after that. 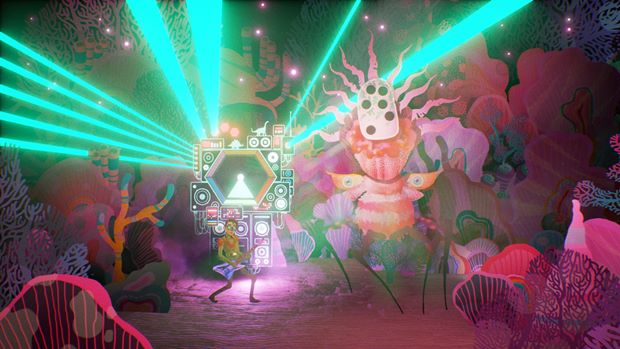 "I do see them using the full potential of the One X. I think it’s going to used primarily for texture size, effects, stuff like that. You can make a great game for the Xbox One, but it’s going to look amazing on the One X."

When can we expect the game to release? Is there any future content in the back of your mind that you would like to implement?

No release date yet.

Sure, it’s on the cards.

Do you see games using the full potential of the Xbox One X, especially given that developers also need to support the older Xbox One?

I do see them using the full potential of the One X. I think it’s going to used primarily for texture size, effects, stuff like that. You can make a great game for the Xbox One, but it’s going to look amazing on the One X.

Is anything else you want to tell us about the game?

That’s about it! Thanks for asking me some great questions!

Tagged With: Annapurna Interactive, Beethoven and Dinosaur, pc, The Artful Escape, Xbox One