Based on one of the most famous pen and paper RPGs of all time, Deponia developers Daedelic set to work on The Dark Eye: Chains of Satinav. I never played the original, and I have no experience with the world of The Dark Eye, making Memoria an interesting point to start engaging with the series. A vibrant point and click, The Dark Eye’s logical and meaty puzzles are a real draw, but they are somewhat undone by the two-part structure.

Taking place directly after the original game, players continue with the quest of Geron. As a bird keeper come mage/accidental hero, Geron sounds like he’d be an interesting character to control, but his sections tended to be where the game drags. You sadly begin as Geron, and the prologue leaves an accordingly sour taste. You start in a forest with no real direction, but it soon becomes apparent that Geron is seeking out a mage who has the power to undo a curse placed on his love. 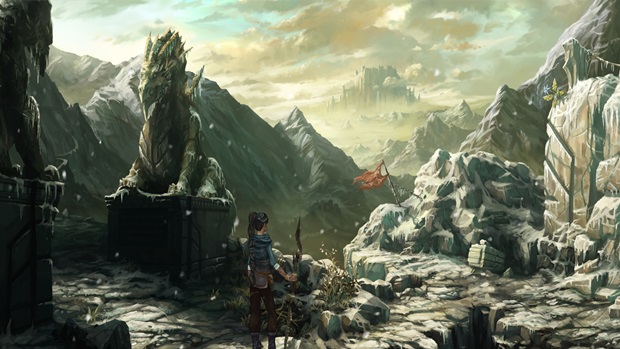 Having never played the original I was somewhat baffled by this blunt and inconsiderate opening. It gets better when Geron meets the mage, as his demand of Geron is that he solve a riddle in return for the cure.

"Where the narrative dips into the abstract, the general logic holds up for the game's brainteasers; an accolade that can seldom be attributed to the point and click genre."

The riddle concerns the exploits of Sadja, a forgotten princess from hundreds of years in the past. You switch control to Sadja at various points in the game, and it is here where things pick up.

As a character, Sadja is far more switched on than Geron. The bird catcher just feels like a watered down George Stobart, but Sadja offers a compelling development as her dreams of grandeur through war take a variety of twists and turns. She’s also accompanied by a sarcastic magical staff endowed with the power of speech.

Take that common sense! It is here the writing gets into a good rhythm, with the banter between Sadja and her unconventional companion often raising a smile. 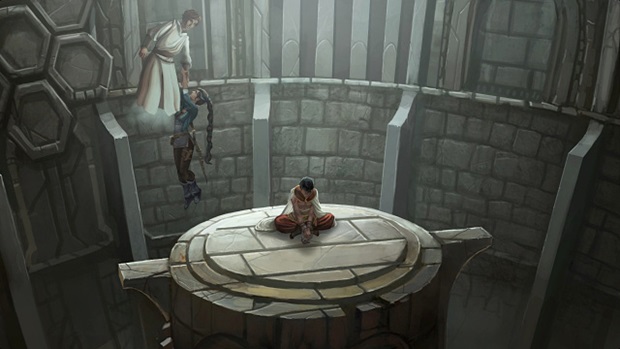 Where the narrative dips into the abstract, the general logic holds up for the game’s brainteasers; an accolade that can seldom be attributed to the point and click genre. The genre standards are all here, with a variety of items to find and piece together. A hotspot system prevents you from having to pixel hunt (thank the lord), and a persistent spell adorns each character’s inventory that is used in consistently creative ways. Puzzles are satisfying and don’t offer half the frustration normally associated with the adventure genre.

"If you love a good fantasy romp and point and clicks, you can do much worse than The Dark Eye: Memoria."

So we have decent gameplay and writing that is good at least half of the time. The ribbon on the present is equally appealing, with a unique visual style. It has a pseudo-papercraft aesthetic, capable of creating detailed and rich backgrounds. The animations aren’t quite so refined, and are made even worse by occasional frame rate dips. My system isn’t exactly a slouch, so this kind of juddering frame rate is hard to swallow. I dread to see how Memoria would perform on a laptop. Audio is mostly unmemorable, a fact not helped by Geron’s sedentary vocal performance. Sadja and her staff come more to life through their voices but, once again, the presentation is a hit and miss affair. The world comes to life through the visuals, even if the characters don’t seem quite so wholesome. 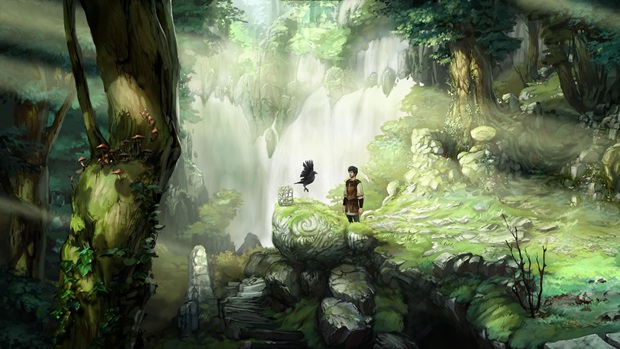 Memoria is a decent point and click, one where level and puzzle design triumph above all else. The plot is where most adventure games live and die though, making Memoria a game that runs through in a veritable coma. Geron’s sections lack the emotion, variety and engaging writing of Sadja and, though the gameplay holds up throughout, it’s a shame the two halves are not created equal in terms of their narrative. That said, half of a good game is better than many modern titles muster and, if you love a good fantasy romp and point and clicks, you can do much worse than The Dark Eye: Memoria.

A rich and vivid fantasy point and click, Memoria's engaging puzzles will draw you in, even when the hit and miss writing doesn't

A copy of this game was provided by developer/publisher for review purposes. Click here to know more about our Reviews Policy.
Tagged With: daedalic entertainment, pc, Point and Click Adventure, review, Steam, The Dark Eye: Memoria