Supermassive’s Until Dawn wasn’t a multiplayer game, but my friends and I played it like one. We’d all cram onto my couch, turn down the lights, and play the game together. One of us would control the characters on-screen, but we’d make the choices together as a group, passing the controller every now and then. It was a grand, spooky old time, and every time we got together for a session, I always wished that we could play it together. It seems I wasn’t the only one jonesing for this kind of action because Supermassive has gone and given it to us in Man of Medan.

Man of Medan is a bit different than Until Dawn. It’s the first part of The Dark Pictures Anthology, a collection of shorter, stand-alone horror games inspired by classic horror anthologies like The Twilight Zone, the work of Edgar Allan Poe, Scary Stories to Tell in The Dark, and Tales from the Crypt. The intent is that each game will focus on different horror tropes. Man of Medan, based on the legend of the Ourang Medan, an alleged ghost ship that was lost with all hands in the late 1940s under mysterious circumstances, focuses on the idea of the ghost ship and home invasion tropes. 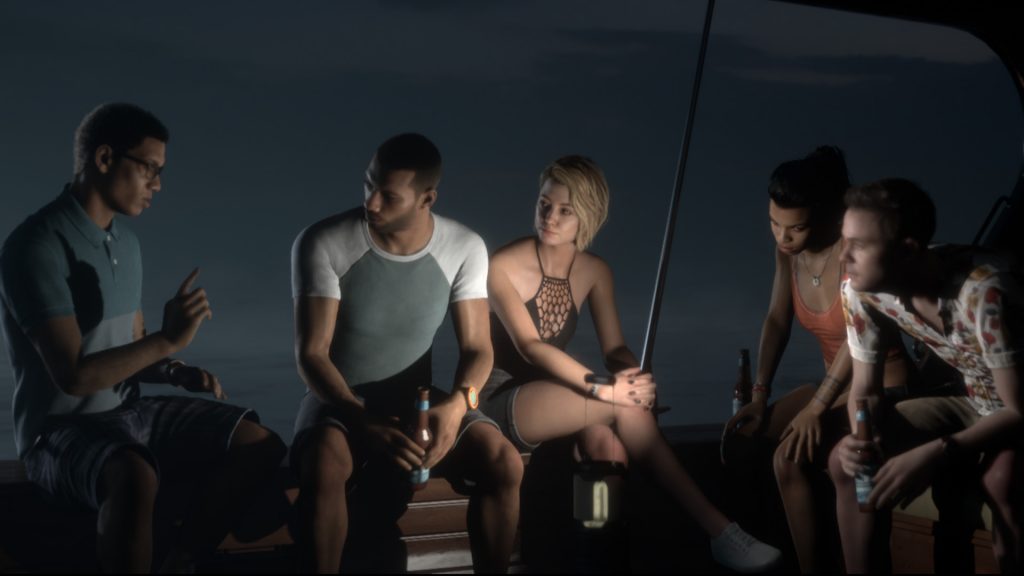 "This is a good, well-acted ghost story, and if you can go in blind, you should. Like Until Dawn, you’ll switch characters from time to time, and all are playable. Who lives, who dies, and the specifics of how things shake out are ultimately up to you."

The story follows Alex, a medical student, Julia, his rich girlfriend, Conrad, her party animal brother, Brad, Alex’s socially awkward brother, and Fliss, the captain of their rented boat, as they search for the wreck of a downed rescue plane from the 1940s. Obviously, things get a bit more complicated than that, but I can’t reveal anything more about the story without spoiling it. It really is something that you should know as little as you can about going in. This is a good, well-acted ghost story, and if you can go in blind, you should. Like Until Dawn, you’ll switch characters from time to time, and all are playable. Who lives, who dies, and the specifics of how things shake out are ultimately up to you.

Man of Medan is a short game (you can run through the entire game in about six hours), but what’s really impressive is how many choices you get to make, and how those choices have a significant impact on the game’s story and the gameplay available to you any. This mostly takes the form of dialogue and determines how the characters interact with one another and what character traits they develop, which can change how they deliver their lines. If, for instance, you’re kind to a character who gets seasick, that will change your relationship to that character. Responding positively to another character’s flirting might mean two characters strike up a relationship. Even simple conversations where a character asks for advice can determine plot threads later, and decisions that seem relatively minor at the time come into play later. I’m being vague to avoid spoilers, but there are a lot of decisions to make here, and almost all of them matter.

This applies to the actions you take outside of conversations as well. Like most games of its ilk, Man of Medan’s action is mostly conveyed through quick time events, pressing buttons in time with certain actions or moving a cursor to a certain area and pressing a button to perform certain actions. Almost all of them are time limited and messing one up can result in anything from a minor cut to a character’s outright death. There are even situations where doing nothing is the right answer. The game isn’t above faking you out, and that, coupled with the limited time you have to make decisions, can keep you on edge. There’s even a mechanic for keeping calm in tense situations, requiring you to press buttons in time with your character’s heartbeat to avoid freaking out. The more harrowing the situation, the harder the presses become, resulting in some legitimately intense and difficult situations with real stakes for your characters that you can’t undo by loading a save. Man of Medan is an intense game with legitimate tension and real scares, and I had to stop playing at one point because I was so freaked out. The fact that it was late at night didn’t help. It’s rare that a video game scares me, but Man of Medan managed it. 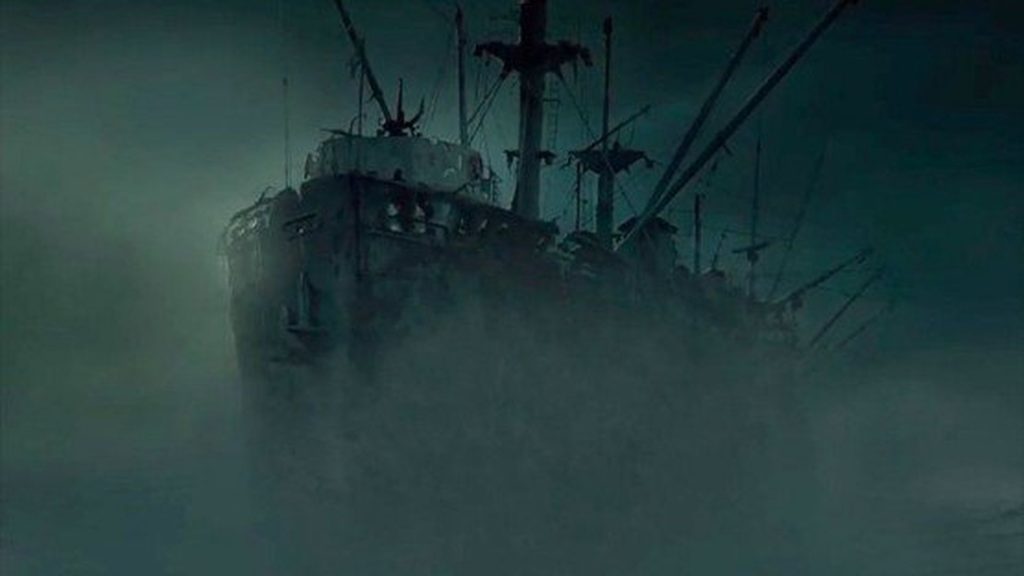 "The game does attempt to help you out by providing premonitions, which are found by locating pictures spread across the different environments. Like Until Dawn’s totems, these give you an idea of what might happen next, or what not to do. They’re barely more than flashes, but they can be a big help if you manage to figure out what they’re trying to say."

As mentioned earlier, you can play the game in co-op, and it’s one of the game’s best features. This is done one of two ways. Movie Night mode allows you to play with up to five people locally and assign certain characters to certain players. I did this with my fiancée, and we had a blast. It’s what we did with Until Dawn, but this time it’s built into the game, and it works well. Shared Story mode, on the other hand, allows you to do the same thing online, though it can only be played with two players. Both are an excellent time, and I’d highly recommend playing the game this way if you can.

Regardless of how you play, you’ll probably want to play more than once, just to see the different ways things can play out. The game is unforgiving, and it’s easy to make choices that seem good at the time and turn out to be just the opposite, either because you missed a quick time event or because you misread a situation. The game does attempt to help you out by providing premonitions, which are found by locating pictures spread across the different environments. Like Until Dawn’s totems, these give you an idea of what might happen next, or what not to do. They’re barely more than flashes, but they can be a big help if you manage to figure out what they’re trying to say. There’s also The Curator, a mysterious man recording your story who will provide feedback after key situations and give hints, should you ask.  The same is true of the game’s collectibles, which provide the characters with information about what’s going on and help you make more informed decisions as a player. Some, like a knife, might even allow you different options during important moments, should you find it. Man of Medan may be short, but it requires you to stay on your toes and think, which only lends to its replay value.

Once you’re done with the Theatrical Cut, the game’s default, you can take on The Curator’s Cut, which makes some significant changes. If that’s not enough, you can also check out the game’s special features, which detail the origins of and significant works within horror anthologies, and features an interview with Shawn Ashmore, one of the game’s more prominent actors. Man of Medan may be short if you only play it once, but there’s a lot here, provided you want to see most of what it has to offer. 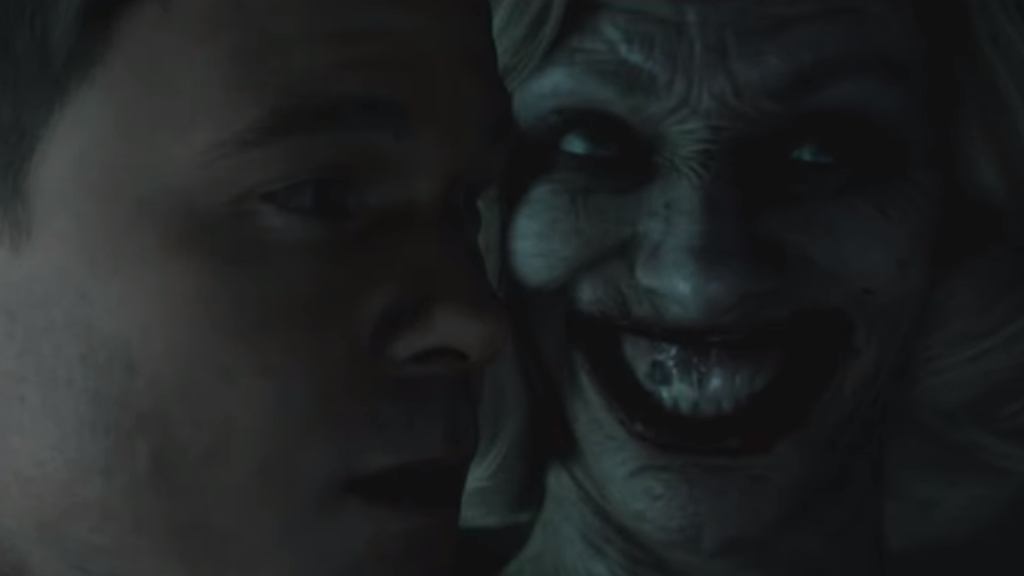 "Some folks may take issue with the fact that you can’t load from previous saves when something goes wrong, but it’s honestly part of the game’s appeal. Your choices matter here, and you have to live with them, at least until the next playthrough."

The only real issue I had with Man of Medan were the game’s controls. They’re oddly tanky, and often rely on you to be in very specific places to interact with certain objects. Since the game uses fixed camera angles, this can often mean that you’ll go in directions you don’t intend to when the angles change, and there will often be sections that it looks like you can enter but can’t because they’re just there for the camera. Some folks may take issue with the fact that you can’t load from previous saves when something goes wrong, but it’s honestly part of the game’s appeal. Your choices matter here, and you have to live with them, at least until the next playthrough.

Man of Medan may not be as long as Until Dawn, but it’s got a ton of replayability and makes the most of the choices it offers its players. The co-op mode is an exceptional addition to a great formula, and the fact that there are two “cuts” of the game is just icing on an already delicious cake. Supermassive has done great work here, and for a budget price, you really can’t go wrong. Now I just need to round up my friends. We’ve got a ghost ship to take care of.

Tanky controls. Fixed camera angles can cause issues. Some people won't like the autosave system.

Final Verdict:
GREAT
Man of Medan combines a strong cast with a memorable story, interesting choices, and co-op play to create an excellent interactive horror movie.
A copy of this game was provided by Developer/Publisher/Distributor/PR Agency for review purposes. Click here to know more about our Reviews Policy.