The massive world of Tamriel makes the transition to a persistent online realm in the Elder Scrolls Online. Is this a world you should be invested in?

With the increasing popularity and proliferation of online worlds, however, it seemed almost inevitable that Bethesda would answer the call and bring Tamriel to the online world, capturing a new generation of online gamers, while enticing those familiar with its world to return, if only for the promise of a fully realized Tamriel, with new quests, adventures, locales and enemies, just begging to be explored.

ESO features a fairly robust character creation system, with a plethora of aesthetic options. On the flip side, if you’re just looking for a quick, decent looking character, the randomize button can adjust all these settings at once, on the fly.

There are nine distinct races that players can choose from, each with their own passive racial bonuses and abilities. One race may have an inherent boost to magic, while another may have a resistance to hostile spells. Like other Elder Scrolls games, these passive racial abilities are helpful, but since character progression can basically let you overcome any weakness, they aren’t nearly as important as in other role-playing franchises.

While having only four classes seems a bit limited, especially in comparison to other modern MMO’s, the character progression system is equipped to handle the missing workload offered by additional classes. Similar to most MMO’s, you complete quests and take down enemies to level up. The twist here is that any skill can be leveled up, the more you use it, in true Elder Scrolls fashion. 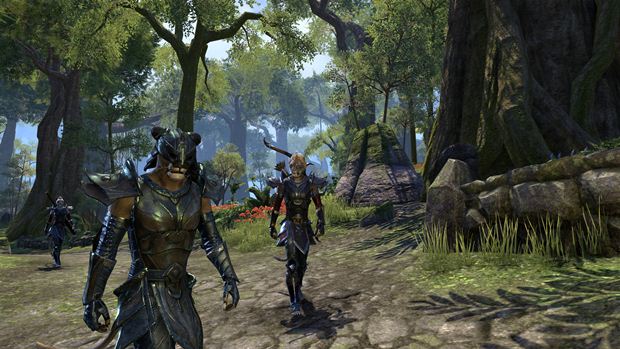 " Most of the quests you’ll run across are multilayered, requiring you to perform a series of objectives, this makes the quests seem more involved than simple fetch or kill quests."

In a sense, raising your skill levels is more important than upping your player level, as your skills can be improved or new skills can be unlocked only after meeting certain skill level prerequisites. There are also “ultimate” skills that function like finishing moves, allowing you to more easily take on large groups of foes or boss class monsters that have oodles of hit points.

For example, blocking with a shield and then swinging a sword will slowly increase your one handed and shield skill. Want to snipe enemies from a distance? No problem, just equip that maple bow you found on that skeleton archer, and start firing, and your bow skill will increase with every hit. Want to fry an enemy with some fireballs? No sweat. Just pick up that nifty fire staff and launch some burning goodness their way. Your destruction staff skill will increase, making you a better destruction staff user, no matter which class you are.

Presumably, in MMO terms, at face value, the four classes represent tank/healer, ranged damage, tank/melee, and ranged/melee damage, however roles in a group can be, (and frequently are) rotated on a regular basis.

Your main source of experience is completing quests. Most of the quests you’ll run across are multilayered, requiring you to perform a series of objectives, this makes the quests seem more involved than simple fetch or kill quests. In regards to character progression, it’s a far more methodical pacing than most MMO type games. This may be familiar to gamers who are experienced with the Elder Scrolls series but for those who prefer a faster paced game, in terms of progression, they may be put off.

You also get a skill point per level up. These can be placed into any skill line you prefer. Any class can basically place a skill point into any of their class skills, weapon skills, armor skills, or crafting skills, as well as faction only skills that can be found and joined throughout the game. 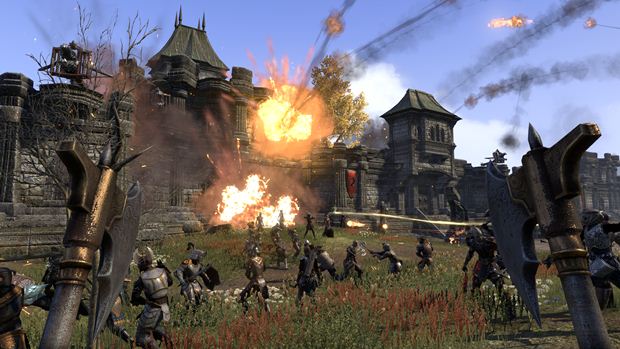 " Graphically, everything looks rather well done. In true Elder Scrolls style, almost every surface in and around towns have an intricate, well worn quality, as if wizened by age and the elements. "

Story quests become available every so often at specific levels and reveal more of the story, though the decision to do these is completely up to you, as you can make your way through the world without ever touching upon the main story, outside of the tutorial level, if you prefer.

While you’re out adventuring, you’ll invariably come across many staples of the Elder Scrolls, like monuments, which can be used to fast travel to zones you’ve visited previously.  The crafting system is about as in depth as any MMO out there, featuring a wide range of professions, materials and player created items.

Most crafting professions include skill lines as well, that you can improve with spare skill points, enabling you to be a better craftsman. Most of these come in the form of passive improvements to your crafting abilities, like small percentages increases or an improved ability to find raw materials.

Graphically, everything looks rather well done. In true Elder Scrolls style, almost every surface in and around towns have an intricate, well worn quality, as if wizened by age and the elements.

In terms of player interaction, social interaction in ESO is handled mostly though voice chat. Even without a compatible headset, there are on screen icons that enable you to manage group invitations and friend settings. A wealth of emojis can also be used from the menu, indicating if you’re taking a lunch break, need healing, or presumably, someone just stole your car.

From a psychological perspective, ESO presents a unique case. It features the addictive quality found in most MMOs, in regards to that reward based gameplay, however, whereas other MMOs dole out these incentives on a regular basis, ESO does so only incrementally. 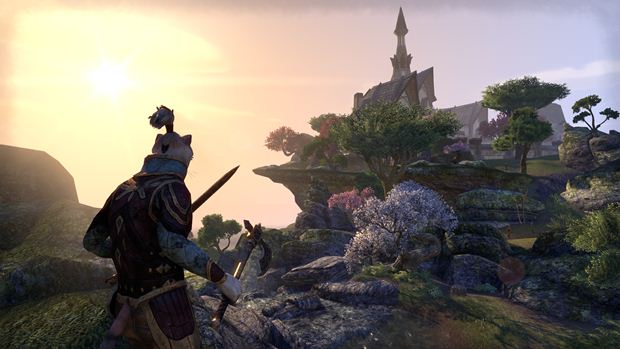 " This creates a strange disconnect between the player and the world, almost as if you’re a wandering spirit, never truly part of the larger, living, breathing ecosystem."

As a result, as you travel the lush landscape of Tamriel, taking down enemies and completing quests, you become more powerful, but only just so. Even though you save towns and avenge restless spirits, and take down tyrannical leaders of hidden cults, none of it feels weighty or meaningful, as if you’re a member of the world, but ultimately detached. This extends to the game’s variety of dungeons too, which can be stumbled upon in the world or accessed via the dungeon finder. This creates a strange disconnect between the player and the world, almost as if you’re a wandering spirit, never truly part of the larger, living, breathing ecosystem.

Whereas the previous Elder Scrolls games let you make world-altering decisions and embark on seemingly epic quests, such as ridding the land of slavery, closing the doors to Oblivion, ESO seems content in its mediocrity. It’s formulaic to the point of being spectacularly unremarkable.

In the end, ESO is a bag of mixed messages. For every gorgeous landscape and picturesque vista, there is also tedium and meandering. For every multi-layered quest, rich in Tamrelian history and lore, there is the uneven pacing, and comparatively slow progression. For every in depth narrative found by obsessively searching bookshelves, there is the capricious dungeon raiding, sidelined by any rhyme or reason. ESO is at its best where it has always shined, as a rich single player experience, with a world steeped in myth and lore. Ultimately, that’s what ESO is, a rich single player experience, you just happen to be playing alongside other people.

Massive world to explore; Graphics have some nice touches here and there; Voice chat is much easier than a virtual keyboard; Insane amount of in game lore to digest.

Actions have no feeling of weight or importance; Crafting system is tedious; Has the look and feel of an MMO, but the gameplay of a single player experience; Classes aren't terribly original or exciting.

Final Verdict:
FAIR
The venerable Elder Scrolls series survives the transition to an online game, minus the online aspects that are actually enjoyable.
A copy of this game was provided by Developer/Publisher/Distributor/PR Agency for review purposes. Click here to know more about our Reviews Policy.