It’s always a daunting task to review any Scrolls game, or normally any game from Bethesda. It’s mainly due to the fact that the world they create is filled with so much content that it is impossible to ‘complete’ it in a given amount of time. What makes things even worse is that you will most definitely encounter bugs and technical glitches of the absurd variety whenever you play these games. It’s easy to ignore them considering the size of these games, but most gamers have come to accept them as something that comes with a Bethesda game.

I’ve waited a long time for The Elder Scrolls V: Skyrim, since it’s been ages since Oblivion came out and captured my heart. The stark difference between Oblivion and Skyrim is that the level scaling has been significantly altered in Skyrim, and for the better. No doubt most of you wanted to know this first, and for the fans who fixed most of the issues in Oblivion using mods, this may just ease their worries. Having sunk an unhealthy amount of time in Skyrim, it’s just a testament to how addictive this game is. The game features a laundry list of improvements over its predecessor and is possibly the only game from Bethesda that contains a limited amount of bugs.

You are Dovahkiin, the Dragonborn. The blood of Dragons flows within you, giving you unique powers like Dragon shouts, and you’re the only one that can free Skyrim from the Nordic Dragon, Alduin. It’s not going to be easy, though. No, it’s not because of the game’s difficulty, it’s because the side quests and the world of Skyrim is so inviting and fun that you may forget about the main quest for a long time.  The storytelling towers above that in Oblivion, and you will encounter some moments in the game that will make you go weak in the knees. When you fight a Dragon, and there are lots of them in Skyrim, the main theme will play in the background. It charges you to such an extent that it makes the gameplay so much engrossing, I almost feel grateful to Bethesda for having experienced it. 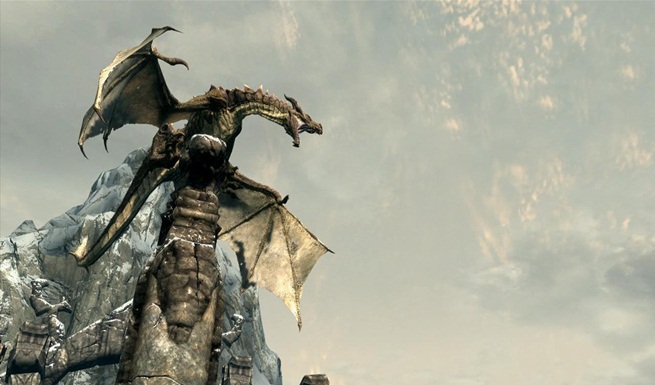 Your main quest will start with you running away from a dragon and eventually killing one, and absorbing its life force, because you are Dovahkiin, the Dragonborn, obviously. Using these life forces you can unlock Dragon shouts, but you have to learn them first, which you eventually will when doing the quests or clearing out the dungeons of Skyrim.

Aaah, dungeons, I know what you must be thinking. But in Skyrim, all the 150 dungeons are completely unique. You heard that right. Compared to the similar dungeons of Oblivion, this is such a welcome game design that keeps the game fresh and reduces repetitiveness. As an open world game, you are free do to whatever you want, learn whatever you want, or go wherever you want.

Freedom is one of the main things that is a given with Bethesda games, and it’s no different here. You can earn XP by killing enemies, completing quests or just doing some random things in the game. XP enables you to level up and invest points in a lot of unique skills like Destruction, Restoration, One-handed, Smithing, Sneak, etc. If you have played the Scrolls’ games before, you should be familiar with most of these. You cannot max out everything though, there are a lot of skills here and you get a limited amount of points, so you have to build your character carefully. You can also save your perks here, which is really nice, as it gives you more time to decide as to what skill to invest in.

Combat mechanics have been overhauled a lot in Skyrim. It’s no Dark Souls, where fighting using a sword is nirvana, but in Skyrim, it is sort of satisfying. The main thing here is the variety of magic spells you can use, which are as good to look at as they are to use. You will encounter a lot of enemies in Skyrim, so if you wander too far and end up going to a place where the enemies are way stronger than you, it’s going to be a massacre. A bear could end up mauling you bad. These dangers are what make exploring fun though, since you never know what special armour or equipment you may end up finding that makes the game incredibly easier.You can also hire some companions if you need some help and they are mostly a hindrance because of pathfinding issues. 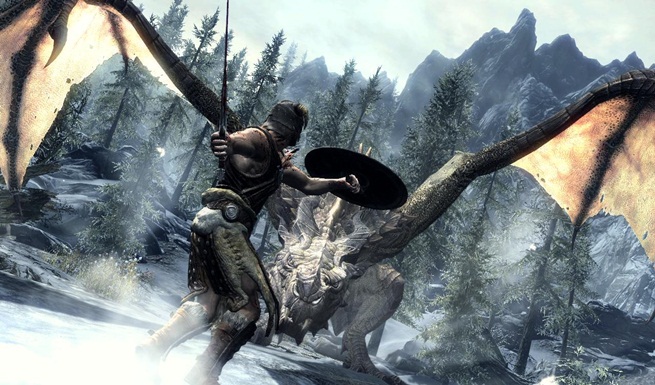 You can also create your own equipment after acquiring certain skills. Most blacksmiths in Skyrim usually provide you the means to do so, and of course, for alchemy, you need to go to someone else. Creating things is fun and is the only way you can easily get a legendary set, which makes you look like a badass. You can still be mauled by a bear though; such is the world of Skyrim. Damn, bears. Especially, those white ones which can take a fireball in the face. There are some funny things you can encounter in the game. Giants taking down a Dragon; Mammoths taking down a Dragon; or a… ermm… bear taking down a Dragon. Of course, as you level up you will encounter stronger enemies, like say, Blood Dragon. So if you are playing in any difficulty over adept, it’s going to be tough.

Be prepared to sink over 100 hours in this game, since once it hooks you with its addictive quests, there is no looking back here. One thing I have to mention is the music. The music in this game is one of the most beautiful things I have ever heard. It just makes exploring so much peaceful, and combined with the fact that the graphics look much better than Oblivion, offering different vistas in daytime or night time, Skyrim can become a place equivalent to paradise. Of course, if you have a decent PC, you can easily experience the full visual package that game has to offer.

I played this game on a beefy PC; maxed out the game to ULTRA, and yeah… it’s an experience like none other. It’s funny that there are hardly any bugs that I have encountered in the PC version, yet. There are plenty of mods available already for the PC version, so if there is an RPG with an enormous amount of content, this is it. I feel like Skyrim has matched Morrowind for me, in terms of how I have approached the game and got lost in its world. There is hardly a boring moment in the game so far, as I usually end up finding something new or cool things to do; even if they seem trivial, they are a lot of fun. 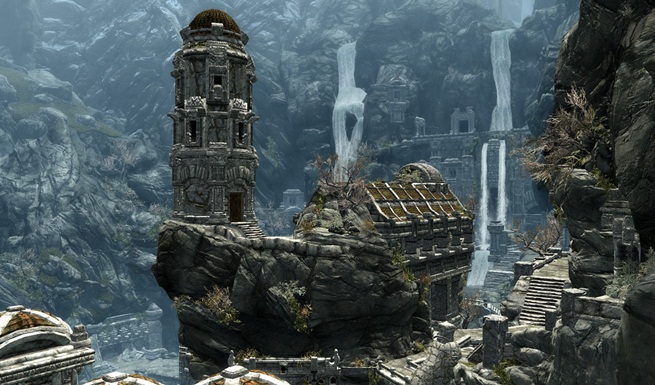 This is one of the defining games of 2011, and if you are an RPG fan, do yourself a favour and pick up this game. Not only is it a complete value for money, but this is what gaming stands for, according to me: Freedom. Be free; do whatever you want and have a lot of fun. The writing in this game is phenomenal as well, as you could find a lot of books that you may just spend hours reading, and combined with believable characters and hilarious dialogues.

I wish Skyrim was a real place because it definitely sounds like a place that I would want to live in. So go ahead and pick up this game, it’s one of the best games of this generation.

You may encounter some technical issues. Friendly AI is incompetent.

Final Verdict:
EDITOR’S CHOICE
This is one of the defining games of 2011, and if you are an RPG fan, do yourself a favour and pick up this game. Not only is it great value for money, but this is what gaming stands for, according to me: freedom. Be free; do whatever you want and have a lot of fun while you do it.
A copy of this game was provided by Developer/Publisher/Distributor/PR Agency for review purposes. Click here to know more about our Reviews Policy.