Does Van Helsing still have what it takes to put the spooks into the undead?

Recently I sat down to sink some hours into the preview build of the upcoming fantasy action-adventure RPG, The Incredible Adventures of Van Helsing III and I’m glad to say that I can walk away from it with a mostly pleasant experience under my belt. It was my no means perfect, but what it attempted to do, it mostly did well.

For those of you that aren’t in the know, or simply haven’t given the series a go, The Incredible Adventures of Van Helsing is an action adventure RPG set in the fairly impressive Gothic world of Borgovia. The first game in the series is a personal favourite of mine with Gamingbolt praising the setting, gameplay and wealth of content.

Now, given that this was a preview build of the game, I can’t quite tell you where I was dropped into the game. Honestly, I don’t know if I started at the beginning or if this was simply a locale chosen by the dev team to serve as a testing ground. Either way, upon setting out on my adventure I was given the choice between one of two character classes. One was The Protector, a woefully generic looking melee focused character and the other is The Elementalist. 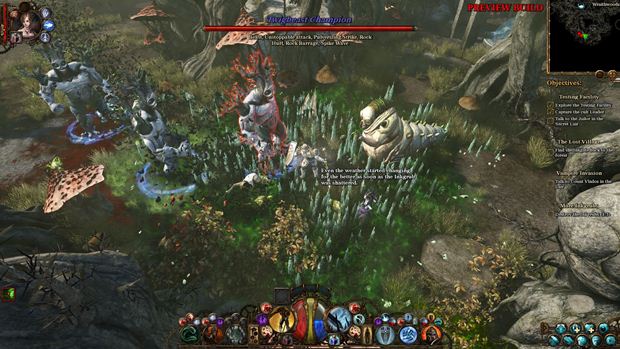 "Sound wise, the game is on point for the most part. Our two protagonists, Van Helsing and Katarina, the spectral apparition get the best dialogue of the two, make no mistake. I could listen to Van Helsing and Katarina banter back and forward for hours on end, the same however, can’t be said of many NPCs that had dreadful voice over work."

Given that I tend to go with front line combat, I grudgingly selected the Protector and waded into the Secret Lair that was my starting point. Immediately, I didn’t get on too well with this character class, which was not what I expected given my past love of melee characters. I soon discovered that this was because I was using the keyboard and mouse setup. It simply didn’t feel good for the Protector, the controller setup was much better as it resulted in less headlong charges into the opponent, which in turn resulted in less pointless deaths.

So having decided that the Protector wasn’t for me, I switched over to the Elementalist and I instantly dominated everything that dared to come my way, and this was on Hard difficulty. Say what you will about swarm enemies having their place in games, but nothing, and I mean nothing, could stand against me when I deployed the following strategy. Flame Serpent (a fire spitting Hydra-esque creature), Blazing Barrier (wall of fire) followed by Stream of Bolts (basic ranged mana attack). I would then back pedal a bit and repeat the wall of fire and ranged attacks. On hard difficulty, nothing could touch me, let alone kill me, with that basic 3>2 combo cycle.

"What was less entertaining, was my movement speed. It took so long to get from point A to point B that I regretted switching to the Elementalist. At least the Protector had a charge attack that could be used to cover ground quickly."

Not that this is a bad thing, you can of course throw some other skills and abilities into the mix to stir things up a bit, but given that the preview did little to explain what I was doing and/or why, I just rolled with what worked. And it was rewarding enough to see a blazing centaur burst through my barrier only to be mauled by a summoned pack of Netherhounds.

What was less entertaining, was my movement speed. It took so long to get from point A to point B that I regretted switching to the Elementalist. At least the Protector had a charge attack that could be used to cover ground quickly. But that minor niggle aside, gameplay is mostly a sound and solid affair.

Sound wise, the game is on point for the most part. Our two protagonists, Van Helsing and Katarina, the spectral apparition get the best dialogue of the two, make no mistake. I could listen to Van Helsing and Katarina banter back and forward for hours on end, the same however, can’t be said of many NPCs that had dreadful voice over work. Effort has clearly been made to make the characters seem different, but that doesn’t mean it was done well. 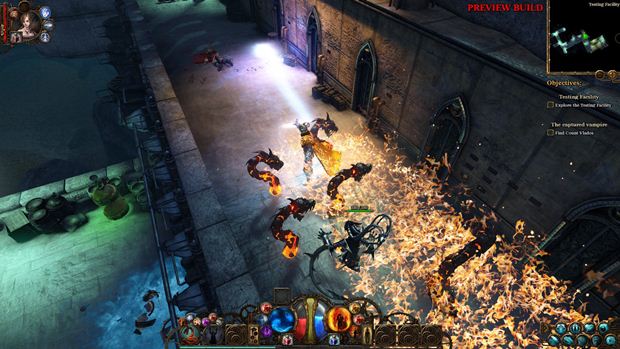 " It would appear that with no competition within this genre of racing games, the studio seems to be on a roll and they no intention of stopping. "

Visually, the game is quite lovely. There’s a varied set of assets that decorate the stages making them starkly contrast with each other. There’s one major flaw with the visuals however, specifically in stages that involve trees and the like. When I first encountered the forested region of the game, which was introduced to me as the second area of the game, the first thing that became apparent was that The Incredible Adventures of Van Helsing III handles screen coverage very poorly in dense areas. As I moved forwards into the tree line, it became increasingly more difficult to navigate properly, at times I couldn’t even see the enemy I was attacking, but my AOE attack pattern that we covered above was more than enough to ensure my survival, despite the fact that I could only see my target perhaps 60% of the time.

To be honest, there’s not much else I have to say about the game at this point, The Incredible Adventures of Van Helsing III is shaping up to be another fantastic entry into the series which, thus far, has been fairly well received across the board. If anything, the final release of this third iteration of the series looks as though it may be the most daring to date. Let’s just hope that the rest of the character classes look better than the Protector, because he really left a bad impression.